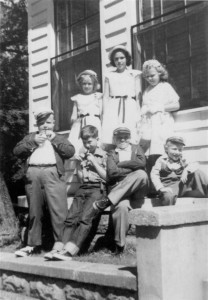 A handful of Adamses.

Monk and Frances Adams had nine children. Forty-two grandchildren. I have no idea how many great and great-great grandchildren. We will estimate that number at a million. Maybe somewhere south of a million, but not by much. You’d think in that vast explosion of genetic material you’d have a lot of variance. But you’d be wrong.

I thought I’d put together a handy guide of the traits common to Adamses. You might find it useful in identifying an Adams in the wild, or perhaps just so you can better know the Adams in your own life. So here they are, in no particular order:

1.) AN ADAMS CAN’T WHISPER. Experts aren’t sure if there is a problem with the vocal cords of the Adams clan, or if it’s a common sense issue. It’s hard to say. I’ve seen many an Adams attempt to whisper and just not get anywhere with it the effort. Usually, though, the volume is turned to eleven and stays there. For example, a couple of years ago I found myself seated two feet from Lindsey Graham. The following came out of my mouth. “THAT GUYS LOOKS LIKE LINDSEY GRAHAM.” Barely a pause. “OH, THAT IS LINDSEY GRAHAM.” Barely a pause. “HE LOOKS SO MUCH OLDER WITHOUT MAKEUP.” And then I realized everyone at my table was recoiling in horror, and that I had been using my outside voice the entire time, because I only have an outside voice.

2.) AN ADAMS THINKS THEY’RE A HERO. Look around. Is there a major crisis happening? Is a building in flames? Are shots being fired? Is there a very short person running INTO the problem instead of away from it? Congratulations! You’ve probably spotted an Adams in the wild! Some of our clan is athletic, others not really. Either way, we all tend toward the idea that we’re superheroes. I remember my Uncle Albert telling me about his cop days and saying, “So, I’d always go in first.” It was a matter of course. He was an Adams, ergo, he’d be the first one in through the door. Whether this instinct is born of courage, stupidity, or a combo of the two, it’s hard to say.

3.) THE MOTTO OF AN ADAMS IS “IT’LL BE FINE.” Yes, it’ll be fine. Whether we’re jerry rigging a trailer hitch or negotiating a major life crisis, we will assure you, it’ll be fine. Just trust us. It’ll all be fine. Really. Don’t worry. Nobody’s going to die. Unless they do. In which case, just wait a little while, and then it’ll be fine again. If you try to insist that something is not fine, you will watch as our eyes glaze over, we stop listening, and start daydreaming about something way more interesting than the idea that everything isn’t going to be fine.

4.) AN ADAMS LIKES FOOTBALL. A LOT. If you’re an Adams, you may choose between two teams. Auburn or Alabama, but really just Alabama. I included Auburn out of deference to Uncle Frank.

5.) IF YOU’RE AN ADAMS, YOU PROBABLY HAVE CANCER. If you don’t, just wait.

7.) AN ADAMS DOES NOT HAVE A STRONG SENSE OF PROPRIETY. I remember at Uncle Rodney’s memorial, a bunch of us found a bullwhip and we were all cracking it in the driveway, and then some of the kids found a .22 and Lord knows what they were going to do with that, and then some grownups came out (BTW – I was, like, 29 or something) and we kinda got in trouble and kinda didn’t, because the bullwhip was really cool and everyone wanted to try that.

8.) AN ADAMS LOVES A FUNNY STORY. Funny stories are what make the world go ’round, if’n you’re an Adams. Adams love to tell a funny story, love to hear a funny story, and they love to laugh at a funny story. There might be some Adamses that don’t love a funny story, but I haven’t met any. Of course at every family reunion you meet a good twenty or thirty close relatives you’ve never met before, so maybe the humorless Adams is out there, just waiting to be discovered. I doubt it. We also have a special love for telling stories about Spoonerism slips. Adamses sometimes have a hard time getting their words straight. Uncle Albert once told several hundred people at a conference not worry about the heat, as they were about to turn on the ovulating fans.

9.) AN ADAMS IS NOT SHY. This is an understatement. At family reunions, spouses of Adamses have been heard to say, “This is kind of a lot.” And the Adamses are like, “WHAT? THREE HUNDRED PEOPLE ALL YELLING AT ONCE IS OVERWHELMING TO YOU?”

10.) AN ADAMS BELIEVES THAT FRANCES ADAMS WAS A LIVING SAINT HERE ON EARTH WHO TAUGHT EVERYONE SHE EVER MET THE DEFINITION OF UNCONDITIONAL LOVE AND WE ALSO BELIEVE THAT SHE IS NOW IN HEAVEN, LOOKING OUT FOR US ALL. We believe this because it is true.

7 thoughts on “What Makes an Adams”