There is a man in my life who I love very much. His name is Bond. He’s pretty unbelievably awesome, and, let’s be honest, damn handsome to boot. The man is the whole package, is what I’m trying to say. Also – a good time. If you want to have fun in Lexington, Kentucky, Bond is your man.

For a very long time, I’ve wanted to write Ani’s story. Ani is my horse, but she doesn’t have a story so much as an epic saga, a tale too big to fit in this space. Suffice to say, other horses taught me how to ride. Ani taught me about the kind of person I want to be. As much as I want to tell that story, in honor of her birthday, which is today, I am instead going to tell the story of how Ani brought Bond into my life.

When I got Ani, she was a mystery. I knew she was chestnut, I knew she was about nine, and I knew she had raced. All thoroughbred racehorses are tattoed on the underside of her upper lip, but Ani’s tattoo was blurry. It would tell us who she was if it could be read, but it couldn’t be read.

Driven to find out who Ani was, I joined the Thoroughbred Times Forum and asked questions of the posters there. Unfortunately, the people posting on the forum confirmed that wasn’t any recourse for me. Ani would remain anonymous. 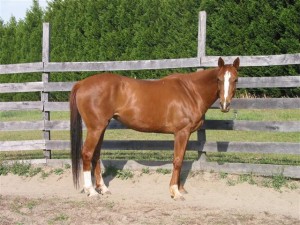 In case you don't know horses, let me tell you - this is a beautifully bred mare. She is genetic quality through and through.

While the forum didn’t help me find out who Ani was, it did provide me with my first experience with people being wrong on the internet. The forum had hundreds of users and a huge number of them were wrong about a great many things. Like any sports fanatic knows, their sport of choice is extremely important and it is also extremely important to educate the people who are wrong about your sport of choice on the internet. At least it was in 2003.

As I fought passionately against the people who were wrong on the internet about my sport of choice, I found allies. One of those allies was a gentleman in Kentucky. He was equally passionate about people who were wrong on the internet. Sometimes we were on the same side, sometimes we were on opposing sides. (I hope it goes without saying that the forum quickly devolved into not just fighting about horse racing, but also fighting about politics, religion and other topics that weren’t as important as our sport of choice.) The gentleman in Kentucky and I were far apart on politics, but close on religion and close on horse racing, and two out of three ain’t bad. More importantly, he was smart and fair and funny.

Months went by. Ani moved from Greenville to Clemson, where she got a new vet. Dr. Stafford was a racetrack veteran. My long dormant hope percolated to the surface as I explained to him about the impossible to read tattoo, the tattoo that countless vets, friends, farriers, trainers and thoroughbred experts had proclaimed completely illegible. Dr. Stafford said, “Let’s bring her out into the sunshine.” We left the barn, he lifted her head, raised her upper lip, and as casually as you please, rattled off the letter and number that would identify Ani.

Thrilled, I sent off the paperwork to the Jockey Club. Yet more time passed. Finally, finally, finally, the packet arrived. Ani was actually Nellie Weathers. Her bloodlines blew me away. First and foremost, Ani was/is a living dinosaur. Horses foaled in 1993 just don’t have Double Jay as their grandsire, Double Jay being the champion colt of 1946. This gave me a feeling of kinship with Ani, as I am also a genetic dinosaur. My great-grandfather was born in the 18th Century. And no, that’s not a typo. I’m talking the 1700’s, y’all.

So, who bred this fascinating, beautiful and ridiculously athletic horse? Someone named Mrs. William C. Jacobs. Mrs. Jacobs had a horse in the Kentucky Derby in the 1960’s and that’s all I could learn about her. Given that most people don’t have a Kentucky Derby runner until they’re middle-aged or older (usually older) I figured she was dead by this point. I went again to the Thoroughbred Times Forum, this time counting on disappointment.

“Does anyone know anything about someone named Mrs. William C. Jacobs?” I wrote. “She’s dead now, but she had a Derby runner back in the day. She bred my horse, so I’m looking for information about her.”

I immediately got several messages from my favorite gentleman in Kentucky. “EMAIL ME,” he wrote. “SERIOUSLY. EMAIL ME RIGHT NOW.”

That day I wound up talking to Bond on the phone for the first time.

Mrs. William C. Jacobs was his mother and he was quite surprised to learn she was dead, given he’d had dinner with her the night before.

Moreover, although it was her name on the paperwork, it was in fact Bond himself who had decided to send Cour de Perse to Honey Jay, thereby creating the red chestnut mare I call Ani.

33,822 thoroughbred foals were born in 1993. Of the hundreds of users on the forum only a couple of them were breeders.

I don’t believe in coincidence. I believe that if we listen to the music of the spheres we can sometimes catch the rhythm and dance along in time. When we do, the world opens up and puts us where we’re meant to be. Ani has helped me find the rhythm many times over the last ten years. Who knows where she’ll take me over the next ten. God knows, with her dinosaur genetics, the horse is going to live to, like, thirty-five.

One thought on “No Such Thing as Coincidence”