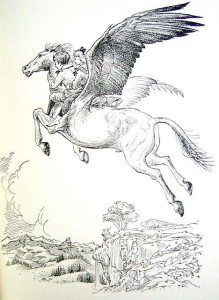 Last June, I met my friend Tamara for dinner at The Blue Heron, a restaurant in Clemson. She returned to me my box set of The Chronicles of Narnia, my favorite books of all time. The table was small, and I set them down on the floor. We mentioned to each other several times that I shouldn’t forget them, but I forgot them.

I’d had that box set for more than twenty years.

I remembered before I arrived home that I’d forgotten them.

But I was strangely okay with it.

My hope was that it would make its way to a Lost & Found box and, after awhile, somebody would declare it unrecovered and take it home. Maybe it would be a cook with kids the right age, or maybe it would be a server who always meant to read those books but never had.

Outside of my parents, no one has had more influence over the way I think than C.S. Lewis. As an adult, I’ve loved and appreciated his nonfiction works very much, but nothing will ever compare to reading The Chronicles of Narnia as a child. They taught me about the kind of person I want to be and I’ve never outgrown them. C.S. Lewis was shamelessly traditional and sincere, espousing noble conduct, bravery, honesty, and valor. His stories were strong on redemption and forgiveness, good humor and adventure. His characters lived out in the world, lived in bright color, and fought for justice with cheerful hearts. What could be better than that? I wish I could write such things. I can’t though. If I could, I would, but I’ve been given other things to write.

Lately I’ve been feeling the itch to go back through the wardrobe door. It’s been too long since I’ve visited Narnia. I’m going to get myself a new set of the Chronicles of Narnia, hoping that the old has found its way to its new home. Whoever that new owner is, they received the best gift I’ve ever given. I have faith it wound up were it was supposed to go.