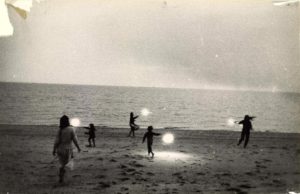 Tonight, I stood on the sandy shore of Lake Hartwell with an old friend. Across the water, fireworks shot into the sky from the Clemson YMCA. Now National Champions, Clemson’s fireworks were fancier than ever – some exploded into the letters “U.S.A.”, others turned into blue stars.

We stood beside tiki torches and all around us swirled what seemed like a dozens of children, all of them holding sparklers. The magnesium glowed red, gold, and blue, occasionally sputtering into large silvery sparks. We were well aware that third degree burns were one stumble away, but it was all too beautiful to take objection.

My friend is a wise woman, possessor of many unique, far flung experiences, and her perspective is always of great interest to me. As we watched the fireworks (USA, USA), I asked her, “So what do you think of America these days?” “America,” she said, “just needs to chill out.”

I then asked her, “Are you still glad you left Facebook?”

“Happiest days of my life,” she replied. She then said that we’ve become trapped in the echo chamber of social media, everything becoming louder and angrier and more divided. Adding, “I think we are better off if we live in our own small worlds. We can do a lot more good. And realize that things aren’t as bad as they seem.”

No doubt the fireworks and the lake and the sparkler-holding children contributed to the effect, but her words hit me hard. Facebook has become an increasingly toxic place. For years I was immune to it. People would talk about the time suck, the negativity that comes from comparison, and while I understood their points I didn’t suffer from the symptoms myself. Facebook has done a lot of good for me– especially when it comes to promoting comedy shows.

Since the election, I’ve found social media a tough place to be. To say I am anti-Trump would be an understatement–which is part of why I find the Left’s response so frustrating. The hegemony of leftist political correctness is abhorrent to me. The Left reminds me of a freshman in film school, or any other artistic discipline. Freshmen do not know how to take a note. You criticize their project and their ego falls apart. By the time they are seniors, any good creative will know how to take a note like a professional. This quality–the ability to take a note–is a trait I hold in the highest regard. On Facebook these days, hardly anyone knows how to take a note.

For what it’s worth, and granted this is a sweeping generality, but I think conservatives tend to take notes differently than liberals. For liberals, politics are personal. Like the freshman art student, when their politics are attacked, they feel personally attacked. It is immature and exhausting to witness the fragility of the ego involved. Conservatives – again, just my opinion – tend to receive political attacks with a smug sort of superiority. They’re deeply confident in their own ideas, and just don’t care that much about the opinions of others. They have a force field that deflects inquiry with stunning effectiveness. And no, in case you were wondering, I do not think highly of either Leftists or Right Wingers. I feel for the silent majority, the moderates who are willing to embrace complexity and shades of grey in their world view. Rarely in history have they been as silent as they are now.

Because all conversation stops before it begins, there is no point in dialogue. On Facebook, anyway. In person, in face-to-face conversation, I believe we function very differently. We are still people when we are in the world. Which takes me back to what my friend had to say–“I think we are better off if we live in our own small worlds. We can do a lot more good. And realize that things aren’t as bad as they seem.”