I consider myself lucky, tremendously lucky, to have lived all the different lives I’d lived. So much so I had second thoughts about this blog post. Would it seem like bragging? But then I realized most people aren’t jealous of minimum wage – or less – jobs. But for the record, I am kind of bragging. 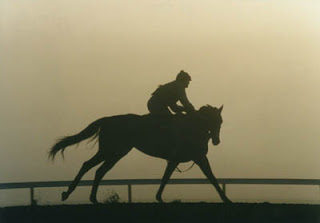 As a teenager, I got a couple of your typical teenager jobs. One at a movie theater, one as a barista. I was fired from both. I made an honest effort. And failed. I was a square peg in a round hole. My first good job was at the racetrack. The shedrows, to this day, are my high holy of holies. The 3:30am alarm, the sacred quiet of the place, at first no sounds but the movement of the horses in their stalls. I still remember their names, their faces. Chicken, Cops, Tatiana Taj, Rattlesnake Dancer… Then the sunlight would come, making the morning mist glow, a solid haze of light except for the silhouettes of racehorses galloping down the track, Mt. Rainier standing tall behind them. To this day I count those mornings as the most beautiful thing I’ve ever seen.

I spent my college summers working swing shifts in a Southern textile mill. Until you’ve worked twelve hour days, and the next week twelve hour nights, and the next week twelve hour days, and the next week twelve hour nights, you don’t know how destructive a schedule can be on your body. On the plus side, the culture of the plant rivalled anything on a soap opera, so at least there was the nepotism run amuck to keep me entertained. I also got to work with a lot memorable people. Sweet, sweet Opal, who collected mugs, loved Elvis, and asked me in horror if I worshipped statues when she found out I was Catholic. Mustachioed Avanelle, who literally ran out of the room when she found out my boyfriend was an athiest. Curmudgeonly old Martin Byrd,who presented me with a picture he had drawn on my last day of work. I still have that drawing.

Once you graduate from USC Film School it only makes sense that you’d take a job with horses, right? Back to the sacred quiet of the pre-dawn hours, watching Griffith Park change colors with the sunrise. The hard and filthy, honest and clean work. The big difference was that I was a part of a large workforce that was entirely Hispanic and entirely male. They made me feel like family, treated me with gracious respect. We set up a bartering system. I brought them Coca-Cola in exchange for carnitas cooked in an unused horse stall on a mini-sized grill. These were the best meals of my life. Tired, hot, sweaty, starving – huddled around the grill with my compatriots, drinking the ice cold pop, eating the perfectly seasoned pork and peppers wrapped in a tortilla. Thanking René, my favorite co-worker and impromptu chef, after it was over. Years later, my church sent me to a conference in Charlotte. At a round table discussion about the “challenge” of the Hispanic population, I listened to a bunch of rich white people spew some of the worst racism I’ve ever heard in my life. Once they’d all shared, I had my say. I felt a lot like Steve Martin at the beginning of The Jerk. “I was born a poor black child…” Except I used the word Hispanic instead of black and I was crying.

I have also been a professional party favor. My party trick? Reading tarot cards. But being a gypsy woman has its perils. And I’m not talking about the time I wound up in a black Cher wig while wearing a coin belt (and all the other accoutrement). I’m talking about the counseling services you find yourself providing when the person across the table from you bursts into tears. It happens all. the. time. I tell the people that it’s nothing but a parlor game, a useful meditative tool to get them to think about an old problem in a new way. In truth, I’m not at all sure what I believe about the tarot, or even what I believe to be true about me as a tarot card reader. I honestly don’t know if I’m picking up on body language and clues in their speech, or how it is that I know what I know. What I do know is that a lot of people are deeply impacted by their readings, so, despite my spiel about parlor games, I treat the process with respect. (As you can tell by my use of the present tense, I still do this. I just don’t get money for it anymore.)

For awhile I worked retail in Beverly Hills. That job was the best. I had fabulous coworkers and some genuinely wonderful moments with actors like Kenneth Mars, who I worshipped and adored long before I discovered what an awesomely fun human being he was. Ellen and Jane Lynch were both incredibly generous comedians, more than happy to let me play along with them. And Aaron Eckhart is a really nice guy. Perhaps most deeply burned into my memory, however, was Priscilla Presley’s scary, scary, scary face, her eyes angrily staring into mine, while she was asking me questions I didn’t know the answer to, and half my brain just kept screaming THERE’S NO DEFINITION TO HER LIPS! THERE’S NO DEFINITION TO HER LIPS! DEAR LORD, WHAT’S WRONG WITH HER MOUTH? And the other half of my brain screamed, DON’T SAY THOSE THOUGHTS OUT LOUD, WHATEVER YOU DO! So that accounted for 100% of my brain, leaving 0% to deal with the issue of Priscilla Presley’s mountain cabin decor.

There were other jobs in LA, too. Almost all of them procured for me by Peter X____. (Thank you, Peter.) Of those, the most fun was the film camp at Pepperdine. It was Peter’s camp, I just was there to do things like a.) forget a camper at LAX (hahahahaha….whoops) and b.) miscount the cameras so I could then tell Peter that several hundred dollars worth of equipment was missing when it wasn’t (hahahahaha….whoops). When I wasn’t screwing up, I was helping kids shape the stories they wanted to tell and watching those stories come to life on the big screen. It is amazing what they can make in a week’s time, starting from absolutely nothing. It is even more amazing to see the sense of empowerment they leave with, having successfully told their story.

In South Carolina, I got a job that gave me a wide range of tasks, the most satisfying of which was exploring a fairly vast tract of Blue Ridge wilderness, plotting new trails, cutting those trails, and then acting as a trail guide. I got to know those woods like the back of my hand. There was one section of forest frequented by a very large black bear. I never saw him, but came to understand his routine so well I felt like I knew him. One day, during a ride, I smelled something dead. Somehow, I knew it was him and searched the forest until I found his body. He’d been shot, his paws taken. It wasn’t even bear hunting season. It felt like I’d lost a friend. There was also a tiny sow bear who had triplets every year. I never saw her, either, but I’d see her little tracks, and the multitude of cub prints following her along. While I was there I made deep and lasting friendships. There was a lot of evil at that job, too much to get into here, and it made it us all into blood brothers. Like ‘Nam. Except not as bad. But close. Real, real close.

At the same job, rather bizarrely, I sometimes put on high end events with my blood brothers. We had a lot of latitude and huge imaginations. For one Halloween party, we literally brought a forest inside. There is something deliriously fun about cleaning up in the middle of the night after a sixteen hour workday. One time we loaded up an ice sculpture onto a rolling cart and went racing down the dock. Cart hit the rail and the ice sculpture went sailing gloriously into space, almost made it to the lake, but instead smashed spectacularly on the rocks below. After that we had a tumbling competition, still drunk on fatigue.

For three and a half years, I took care of Ursula. I didn’t do that for money, but it was like a job in a lot of ways. Especially in the number-of-hours-per-week department and sometimes she’d foist money on me, far more entertainingly she’d sometimes buy me “a liquor.” I learned a lot. Not just about the absolute cluster that is American medicine or the various ailments she suffered from (although I did learn a lot about what can go wrong with a 90 year old), but far more importantly I learned patience. I learned how to make a six hour wait-fest at a doctor’s office into a party. I learned how to act as an advocate for someone else. I learned a lot about love, both how to give and how to receive. She became my very own old lady and I became her granddaughter, even if I didn’t carry her genes.

There have been other things, too. Lots and lots of other things. Even stuff that might actually go on a resume. But the things above remain the most alive.