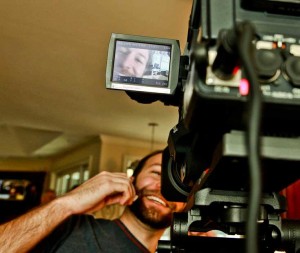 Jeff in his natural habitat.

Jeff is awesome. For example, Jeff was going to NYU Film when 9/11 went down. A bunch of pansies attending the Tisch School of the Arts bailed on New York, transferring to schools that had, like, clean air and stuff. In other words, THEY LET THE TERRORISTS WIN. You know who didn’t let the terrorists win? JEFFREY PAUL MARTELL. You know who is still on the WTC Health Registry? JEFFREY PAUL MARTELL. (Apparently, for the purposes of this post, I’ll be using his full name a lot. Something I should have anticipated, frankly.) The point is this – Jeff is not a pansy. Seriously, I know few people who are less of a pansy than Jeffrey Paul Martell. I don’t know how much you value the pansy vs. non-pansy quality of a human being, but for me it’s pretty high on the list. If you’re like me, then you’ll like Jeff.

You know how the point of art is to communicate ideas and stories that explain us to ourselves, open up the world, and explore what it is to be alive? And how sometimes you come across a piece of art or a story and it kind of destroys you but at the same time you’re really glad you got the chance to be destroyed by it? Because even though the story may contain darkness, it also shines a light on how beautiful life can be? Mutwale is that kind of story. Let me give you some backstory on it. Jeff’s sister lived in Rwanda for six months in 2005. When she came back, she brought with her stories, experiences, observations. One of those stories was the tale of an elephant displaced from his herd who bonded with a fisherman during the time of the Rwandan genocide. Here’s the thing – although the tale is now legendary, it is based on fact. Jeff’s sister was even able to find documents about Mutwale’s herd, his displacement, etc. Who doesn’t think that Mutwale’s story is a story that deserves to be told? Only Nazis. And actually, probably most Nazis would be like, “No, that really sounds like it’s a story that needs to be told. We might be Nazis, but who doesn’t love elephants?”

So, why is Jeff the guy to tell it? Well, for one thing, the story has been waiting patiently inside his head since 2005. When stories germinate for a long time, they tend to come out fully formed. That’s my personal opinion, of course. On a less ephemeral level, Jeff has been an artist for as long as he’s been alive. Up until his final year at NYU Film, he pursued painting and illustrating as well as filmmaking. Before his senior year, Jeff had a light bulb moment – if you combine his two passions, you get animation. He spent his last year taking every applicable course he could before spending four years working in the real world. Then 2008 happened. Jobs dried up, Jeff left NYC for his hometown of Greenville, SC and began work on Mutwale.

As Jeff labored during the day, working for terrible production companies, he calculated how long it would take him to create this short all by himself, working nights and weekends. The answer? 40 years. But by this point the story had taken hold. Instead of giving up on the project, Jeff took on the elephant spirit and pushed forward into brush. He spent five weeks creating a kickstarter and spent another hour after it was all finished and ready to go, staring at the submit button. He has since pushed the submit button and the results are here.

Here’s what I need you to do. I need you to click on that link – here it is again in a super long sentence that is super easy to find – watch Jeff’s kickstarter and then I need you to give him money. To recap, Jeff is not a pansy, he is uncompromising, super talented, well trained and telling a story that needs to be told. I’m giving him money. Not because he’s my friend, but because I believe in the project, and you should, too. Plus, who doesn’t want a Mutwale plush? Everybody wants a Mutwale plush and you totally get one once you donate some dolla dolla bills.