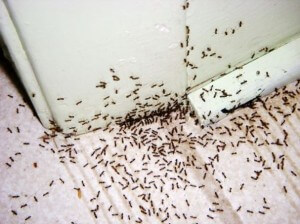 Fourteen years later, and this photo is still stress inducing for me. I got the ant induced PTSD, y'all.

I wish this was a fun, clever, pun-ny title, but it isn’t. I mean it literally. As in, being ashamed of insects.

Over the weekend, I heard friends bonding over millipedes. Millipedes have gone wild in South Carolina this summer. It reminded me of a similar phenomenon back in LA in the early 2000’s. Ants were everywhere in Los Angeles, absolutely everywhere. At the time, Evan and I were living in an apartment in Hollywood. I loved that place. It was big, bright, clean and airy. It had been remodeled right before we moved in, but it still had its cute retro kitchen. All kinds of fun.

Horror show, you guys. Complete and total horror show. If someone put this scene into a movie, you’d say, “This is ridiculous, impossible! I don’t believe it!” But it wasn’t impossible. It was real. There were rivers of ants running down the coats and into the cat food. Rivers. There was so many of them clumps of ants would just go into free fall.

I literally went into shock.

Here are the signs of shock:

I had them all. And I am not, in any way, shape or form, a pansy. But my brain took one look at the rivers of ants and it said, “Nope. I’m done. Checking out.”

But I couldn’t check out. I was home alone and who would you call for such a thing anyway? So I got to work killing ants. I had no bug spray, so I sprayed them with Windex and wiped up huge masses of them in paper towels, then put them into plastic bags. It took time, a lot of time, to kill them all. At least an hour. Maybe two hours of doing nothing but killing ants. I went through an entire bottle of Windex and switched to a different cleaner of some sort.

When I was done, I was covered in sweat and felt like I’d run a marathon. Evan got home from work and, I strongly suspected, didn’t really understand what I’d been through. I don’t know if anybody ever could. I’d lived a scene from a B grade horror movie, one without enough sense to show a little restraint.

Thing is, there is someone I could have called – my landlord. She was a nice Irish woman named Gráinne. And if you’re wondering if I avoided saying her name like the plague, yes, yes I did. “It’s your birthday? Well, have a lovely birthday…you…lovely lady, you.” But I didn’t call Gráinne for help, and not just because I couldn’t pronounce her name. It was because I ashamed of my insects.

Here’s the thing. I kept that place clean. Maybe not immaculate all the time, but generally speaking, definitely tidy and frequently actually, for real clean. And yet I felt that I was culpable for the ants. Somehow, those ants were my fault.

Somewhere along the way, I decided to ask somebody else about it. “Do you have ants?” I asked. Their eyes went wide. “YES! Yes I do have ants!” As it turned out, everybody in Los Angeles had ants. Everybody. It became my favorite thing to start a conversation with, because people were always so relieved – nay, absolutely thrilled – that they weren’t alone in their shame-inducing ant infestation. It became an instant bonding point. Frequently, people would say, “I thought it was because I was dirty.” And I’d happily reply, “Nope, it’s not you! It’s everyone!”

And that’s the thing about shame. It does not survive exposure. It’s a lot more like cockroaches than ants. Once you flip on the light, shame goes running. Here’s the other thing about it. Everybody has ants, metaphorically speaking. Whether it’s things you’ve done or things that were done to you, everybody has ants. And cockroaches. And it’s not fun to turn on the light. There’s that moment in the dark where you know, you KNOW, once you flip the switch, there’s going to be that unpleasant moment where the cockroaches are out in the open. But then they scatter. It’s worth flipping on the light.

One thought on “The Shame of Insects”