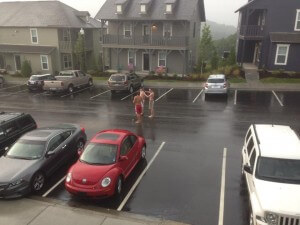 College Disneyland and the players as we first found them. By the end, there were nine of us in the line.

On Monday, I went up to visit my niece Courtney and her boyfriend Cole. They attend Appalachian State in Boone, NC and both live in an apartment complex that functions as a College Disneyland. This apartment complex is a vast and fantastical place, designed for and used exclusively by college students. This College Disneyland status is especially true in front of Cole’s place, which faces a parking lot cul-de-sac. It is used for the parking of cars, shenanigans, and mayhem.

As we parked in front of Cole’s, we saw three shirtless college guys standing in a line, their hands clasped in front of themselves like soccer players facing down a penalty kick. A moment later, we saw why they felt the need to protect themselves. A guy on a balcony a football field away had an industrial strength slingshot, loaded with a water balloon. Soon enough and a player was hit on the shoe. He then “drank ten” as BOTASTIC would say. (At parties, BOTASTIC likes to encourage people to “drink ten.” The definition of “drink ten” is open to interpretation.)

A storm was brewing. Right after our arrival, the skies opened up, releasing a downpour. The game continued. Courtney and I, deeply similar creatures in many ways, looked at one another and said, “I want to play.”

At that point, Gary arrived, fresh from the gym. Gary is a big, affable dude who works out a lot, knows everybody, and is both hyper masculine and easy going. In case I am not painting a clear enough portrait of who Gary is, let me explain Gary’s job. He works for the apartment complex as the garbage collector. Why? Because this job allows him to scavenge all the unopened beer bottles and liquor that the residents leave behind. Primarily at the pool, but also everywhere else. In fact, as he got out of his car, he displayed his newest prize – a bottle of his favorite amber.

Courtney hassled Gary into joining the game with us. Another neighbor, who happened to be wearing a water balloon fight t-shirt with a target on the back, didn’t want to join. When he learned Courtney’s aunt was playing, he was shamed into it. Two girls from a few houses down, Emily and Emily’s Friend, also wandered out into the downpour in order to stand in a line and let somebody sling missiles their way. These people were not previously acquainted with one another, but at college Disneyland, this hardly matters. 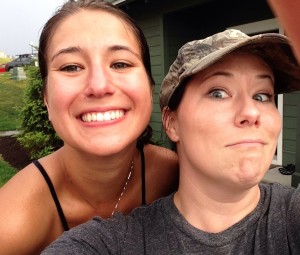 Courtney and me. I am displaying my usual gravitas. Please note, that shirt is normally light gray.

There was a break in the action to fill more water balloons. One of the original players, Drew, yelled, “WE SHOULD HAVE A PARTY TONIGHT!” Gary said, “It’s Monday.” Drew replied, “I WORK AT SEVEN WHO CARES.” Drew was pretty drunk.

As the balloons were filled, the sun started to break through on the horizon. College Disneyland sits on top of a hill, with remarkable views all around. The golden sunset, filtering through the clouds and the rain, was a gorgeous sight. Emily and Emily’s Friend said, “YOU GUYS. THIS IS AMAZING.” They were not wrong.

Ammo replaced, we once again took our spot in the parking lot. I keep checking my back, looking for a rainbow. I knew it was coming. It had too. The rain was too intense, the skies too dark, the sun too bright for there not to be a rainbow. While I checked for the rainbow, Courtney loudly and aggressively talked trash to the water balloon slinger, who kept missing us.

Finally, the rainbow burst into being. I yelled, “Look, you guys, look! Look at the rainbow!”

Giant Gary turned to take it in, and that’s when I learned just how much Gary loves rainbows. Everybody was enthused about the brilliant rainbow, but Gary was seriously freaking pumped.

All the while, Cole took pictures of the event from his own balcony.

The game continued, the rainbow got even brighter, and then a second full rainbow joined the first. This was too much for Gary, Gary who loves rainbows. He shouted at Cole, “HOW’RE THOSE RAINBOW PICS COMIN’, BRO?!”

Never in the history of the word “bro” has “bro” found a better sentence to be in. It was beautiful. It was magical. It was delicious. I looked at Courtney, who was similarly savoring the taste of this gift from heaven, and said, “‘Merica.” She agreed. “‘Merica.”

It was then that the water balloon slinger, perhaps responding to Courtney’s harassment, launched a perfect shot straight into Drew’s bare stomach. He went down, rolling in agony on the asphalt. It seemed overdramatic. Then he moved his hand away, revealing a fairly horrific contusion. It had a white center surrounded by a dark red welt that was already turning purple. “I’m so glad I’m drunk,” said Drew. “Otherwise this would really hurt.”

After he got back to his feet, I wisely addressed him, a sage elder. “When you wake up in the morning, there’s going to be a moment where you don’t know what happened. And then you will say, ‘Oh, that’s right. Water balloon.'” Drew thought this was way funnier than it actually is. The rest of us, many of whom were stone sober, all gathered to take a good look at Drew’s hematoma, and then, without a word, we disbanded, each wandering away from the line. Thanks to Drew’s sacrifice, we suddenly understood the game we were playing, and just as suddenly, decided we’d had enough.

All good things do come to an end. Including Gary’s rainbow. But Gary wasn’t content to let the dream die. Unconvinced his bro had taken an adequate rainbow pic, Gary grabbed his phone and went chasing after the rainbow. I told him it was fading, there was no point. Gary begged to differ. “NAH, MAN. IT’S BRIGHT AS F*** OVER HERE!”

I walked a little way, following Gary in his pursuit. And lo! Gary was right. The descending leg of the rainbow was still bright as f***. For a moment, I watched him as he took pictures, unapologetic in his enthusiasm. We could all be more like Gary, I think. Because if you can’t get excited about a double rainbow while standing in the rain in the middle of College Disneyland as water balloons are slung at you from a balcony 100 yards away and you’re with one of your favorite people in the whole wide world, then I don’t know what you can get excited about, because life doesn’t get much better than that.

3 thoughts on “In Celebration of Gary, Gary Who Loves Rainbows”