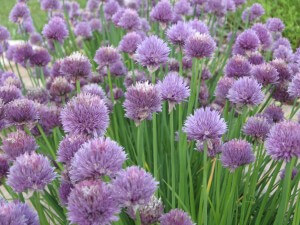 I've always loved the little purple pom-poms that are the flower of a chive.

Two weeks ago, I hired a guy to weed my yard. I hired him because he was an ex-con who needed work, because my garden had become a neglected mess. I carefully went through every plant with him, naming what was a plant and what was a weed. “This is salvia,” I said. “This is chive. This is quince.” A couple of days later, feeling low, sick, and tired, I took a nap. When I woke up, I realized the ex-con had started weeding while I slept. I looked out the window. He had torn up all of my plants. Plants I put into the ground in 2005. He left some iris. Two of the quince. Everything else he taken out, in a misguided attempt to do an A+ job.

Grief does not come all at once. It isn’t tidy. It is a long timeline of events, some of them on delayed release. Time bombs. The destruction of my garden from 2005 was a time bomb. It forced me to remember, in vivid detail, what my life was like then. “Remember,” said the bare dirt, “all your hopes and dreams from back then? Yeah….not so much, these days, huh? Not so much.”

I bring this up now because in a weird way, the end of the garden feels like a symbol of a larger era coming to an end. I won’t name too many names here, because it’s their business to promote and make public, not mine, but many of my best friends have gone or are going. I miss them. A lot. The older I get, the more single I get, the more I value those friends you can call at a moment’s notice and know they will be there for you. I’ve missed Dan Dinger, who is in New Hampshire now, for some time. Alrinthea Carter moved to Greenville, but that’s farther away than you’d think. Lisa DeWaard is in Chattanooga, Tennessee.

The good thing, the blessed thing, is that it has always been good fortune, not bad, that has moved my friends on to bigger and better things. Sometimes they don’t even move away. Sometimes they just have kids, which is a lot like moving to a whole other planet. I am glad for all of them. Tremendously glad. But then there are days where, because you’re human, you miss people, and feel a little sorry for yourself. And that’s when you’re glad some people are still trapped here indefinitely, thanks to the tenure system. (Mwa-hahahaha to you, Tamara McNealy!)

Jackie Onassis once famously made the comparison between the Kennedy era and Camelot. It is easily torn apart intellectually, but within the context of the quote it makes perfect emotional sense. (You should look it up, if’n you’re curious.) It resonates with me. Back when my garden was alive and thriving, in its prime, this house mirrored its exterior. There were marvelous parties and friends, visitors and cocktails on the porch. The foundation was not solid, but you’d never know that from the fun that was had, from the friendships that were made.

It has been strange, too, how even though a lot has changed, so much continuity has been preserved. I mean, Evan and I still had our traditional New Year’s Party in 2013, despite everything. (We have always enjoyed our traditions.) But now, with so many people moving on, it finally feels like the ground has shifted beneath my feet. I’ve become aware of the ways in which this house, this town, pin me to the past, and that this isn’t a good thing. All the same, I have nowhere else I want to go, and more importantly, nowhere else I can afford to go. So I am here. But I sense perhaps not for that much longer. Less and less ties me to this spot, and the winds of change are on the move.

This afternoon, I noticed the chives were making an effort at coming back. They’re hardy little plants, it’s not surprising it’s making a go at it. All the same, it felt like a little miracle, looking at its progress. If somebody else winds up living here I hope they take better care of the chives than I did. They’re really cool plants. Pretty little purple pom-poms that bloom on and on, and the rest you can put on a baked potato. How great is that? Pretty great.