November 29, 2010 January 1, 2011
*
It recently occurred to me that, from an early age, I had a definite notion of the feminine ideal, and developed strong attachments to those women who epitomized it. I thought I’d take a walk back through memory lane and introduce all y’all to the three women who shaped my ideas.
* 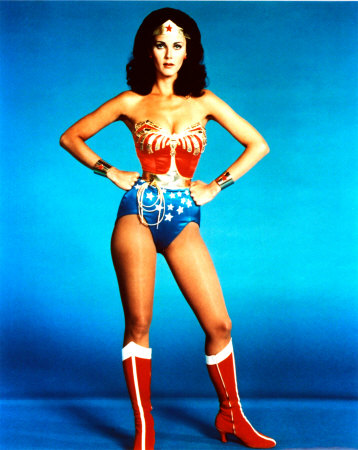 1.) Wonder Woman (1975-1979). Lynda Carter played the role of Diana Prince, aka Wonder Woman, on the small screen from the year prior to my birth until I was age three. I lived for episodes of Wonder Woman. I’d don my wonderoos, spin, and carry around a makeshift lasso of truth. Whenever my father would wrestle with my sisters I’d run upstairs to put on my wonderoos, and run back down to pile on, convinced I was invincible.

Once, at a swim lesson, I found myself splashed most obnoxiously by the kid next to me. I remember thinking, What would Wonder Woman do? And I did this:

My mom, watching from the bleachers, laughed. (She knew exactly what I was doing when I did it, and why.) I didn’t think it was funny. Being Wonder Woman was serious business. Besides, it worked, as I knew it would. I had a lot of faith in the power of Wonder Woman. Those bracelets deflect not only bullets, but also highly chlorinated water. 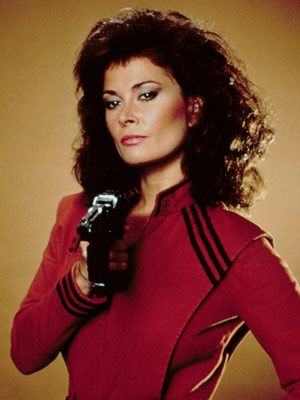 2.) V (1983-1985, 2010-11) (IMPORTANT UPDATE: Jane Badler will be reprising her role as Diana in the new V! So exciting!) Badler played a huge role throughout my formative years. As it turned out, the important thing to me wasn’t that my Amazon role model be a hero, but rather that she be brunette, have big hair and the name Diana. Even more importantly, she had to be tough, smart, and powerful. Although V scared the ever living crap out of me as a kid, I was so devoted to the character of Diana that I helped found a recess game called V, wherein aliens and the human rebels attacked each other. I, of course, played the role of Diana. This game had a tremendous number of participants, and to this day I consider its creation one of my greatest triumphs. Later on in the TV series, the character of Diana was stripped of her power. Diana’s second-in-command, Lydia, played in real life by June Chadwick and on the playground by my friend Amanda, was elevated to commander. I am ashamed to admit I then tried to convince Amanda to switch characters with me. She could be Diana and I’d be Lydia. I’d be playing a blonde woman, but it was a sacrifice I was willing to make for power. Amanda wasn’t buying it. I remained Diana, frustrated by the loss of my rightful place at the helm of the alien empire.

The Alpha and the Omega

3.) Ghostbusters (1984) Sigourney Weaver as Dana Barrett. Yes, Dana is missing an i, but you can’t be THAT picky. She remains tall, brunette, tough, smart, strong, and boasts big hair. The important pieces are there. The character of Dana Barrett settled into me in a different way than either of the comic Dianas. While no one would argue that Ghostbusters is realism, it is more grounded than either V or Wonder Woman, even with Slimer. Certainly, the character of Dana Barrett feels like a real woman. If Ghostbusters had gone the cheap way out and offered up a flimsy, hot, dumb love interest for Bill Murray it would have lost much of its smarts and substance. It was a genius stroke to cast Sigourney Weaver in the role. As it so happens, Dana Barrett’s wardrobe is also one of the first times I’ve ever been cognizant of clothes in a film, which is why I picked the above photo, and not one of her in the metallic orange dress. You can find a billion pics of her in the metallic orange dress, but only a handful of her in one of the understated outfits she wears throughout the rest of the film. I loved her clothes. As it turns out, I am not the only one. I actually found a blog post about it. Check out Clothes on Film for an in depth discussion of the matter. (They choose her cape coat to analyze. I’m more partial to her wrap in the cello-carrying scene.)

Now, there is a reason why the above three women registered with me. However, this post is already really long, so I will make this a two parter and leave the explanation for next time.

3 thoughts on “The Feminine Ideal”