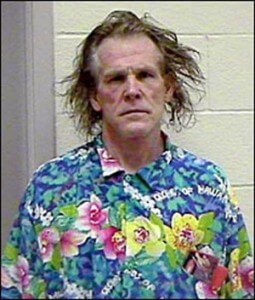 Me, at the end of my workout.

I have an indulgence. I don’t go to movies, I don’t go out to eat at fancy places, I don’t buy clothes, I generally spend as little as I possibly can. That said, last year when Evan’s company started to pay our gym membership, I was able to splurge on a most glorious bit of luxury. His name is Brian Dykstra.

When I first met Brian I was scared of him, as is everyone with some sense. He is tall and big and Danish-looking and would not be out of place at a cage match. He is also all guy. When I signed up to train with him I said, “do you want to take some metrics?” Brian said, “what do you mean?” I said, “well, you know, measurements and stuff?” Brian put his hands up in the air and said, “yeah, you can have your husband do that, if you want.” Over time I discovered that even though Brian looks like he could break your neck, he’s actually a really nice guy.

A couple of weeks ago I wrote a story on this blog about meeting Peter Exline. Within that story I mentioned my “lifelong propensity to say cheeky, off-the-cuff comments” that got me into trouble. Whilst writing that sentence, I internally complimented myself. “You have gotten so much better about that!” I said to myself.

The very next day I had a training session with Brian. It was the usual full thirty minutes. I’d certainly sweated plenty, had my heart rate up the entire time. And yet, for some reason, this happened.

Me: Are you putting the weights away?

Me: No! I don’t even feel like I’m dying yet! I am seriously disappointed in this workout!

Brian turned to me. I suddenly remembered this guy could totally be a cage fighter. He said, in a voice from an 80’s action flick, “then you’re not finished yet.”

Confused by what just happened, my mind hit rewind, then play. There I was, saying the words, “I am seriously disappointed in this workout!” Why did I say that? Because it was true? No, not because it was true, but because I thought it would be a funny thing to say. I rewound the tape farther, to the day prior. “You’ve gotten so much better about making cheeky, off-the-cuff comments!” I’d said to myself. Back in the present I wondered, why? Why can’t you just shut up? You’re not funny! You’re not! WHEN WILL YOU LEARN?

I nervously started hopping around, wondering what was about to happen to me. I followed Brian downstairs, taking four strides for every one of his. “Ha ha! Are you going to punish me? Ha ha!” I kept asking. Brian didn’t say a word. He only nodded. 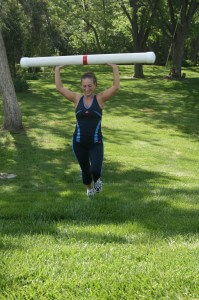 I wonder what she said to her trainer?

That’s when he got out the slosh tube. Slosh tube, you say, that’s a funny sounding thing. How can anything called a slosh tube be bad? Let me describe a slosh tube for you. It is a pvc pipe longer than I am tall. It is about six inches in diameter. It is filled with water. When it is placed across your shoulders the water sloshes left then right and back again. It weighs 45 lbs.

We went over to the bleachers. These are not normal bleachers. They are bleachers made for giant people. The first step is almost hip high to me. Granted, I am 5’1″. So maybe not bleachers for giant people. Maybe just bleachers for normal people. Regardless, to me, they are tall. Brian took a seat on the top step and intoned, “25 step ups, left leg leading.” It went pretty well at first. And then it got hard. And then harder. And then really hard. And I really, really wanted to stop. After my first 25 Brian had me run laps. Then the second 25, right leg leading.

Right around my 45th slosh tube step up two things happened. Firstly, my appearance morphed from your typical workout look to something in the vicinity of a Nick Nolte mugshot. Secondly, I had this thought: Is my heart going to explode?

While I promised Brian I would never again call one of his workouts “seriously disppointing,” I’d be lying if I said doing the 50 slosh tube step ups wasn’t kind of awesome. Sure, it’s not something I’d like to do everyday, but it for my entertainment dollar it beats buying clothes and going out to the movies any day of the week.