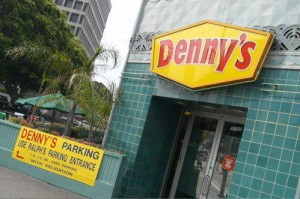 The very doors that New Guy turned his back on. On another note, a nice looking Denny's, no?

This is a tale of murder and mayhem, violence and vendettas. I don’t usually find these things funny, but when a principle participant’s name is Pookie, things change. When Peter Exline is involved, all bets are off.

After many months of bowling at Pico One, Peter called an audible and we switched locales to a bowling alley in Koreatown. Now, I don’t want to cast aspersions upon Koreatown. I haven’t lived in L.A. since 2003 and things change. Suffice it to say, at the time of this story Koreatown was generally kinda okay-ish with a heavy spice of occasional crazy. Like a Subway sandwich carrying a stray jalapeno. On this night we would run into that stray jalapeno, and her name was Pookie.

The evening began with a merry round of bowling. A regular had brought along a friend. New Guy was charming, funny, tall. Taller even than Peter. New Guy was a star. After the bowling we decided to walk a few blocks to a Denny’s. It was late. Midnight-ish, maybe after. It was an unusually large group of us, at least ten bowlers. We pushed together several tables and New Guy sat at the head of the table, his back to the front door. Peter and I sat facing the kitchen, a vantage point that gave us front row seats to the drama that would later unfold.

New Guy continued to delight and entertain the masses from his vantage point at the head of the table, and we were all having a good time. The restaurant was crowded, loud. Somehow, through the ruckus, we all simultaneously sensed a disturbance in the force. We craned our necks to find the source. There, seated at a small booth, were two young black women. Maybe early 20’s. One of them, the one named Pookie, had become enraged at her Korean waitress. We knew her name was Pookie because of her cousin’s neverending monologue. It went something like this: “POOKIE, NO! NO, POOKIE! POOKIE! POOKIE, STOP! STOP, POOKIE! POOKIE!” We knew she was Pookie’s cousin because she would occasionally address the crowd with the announcement, “I’M POOKIE’S COUSIN!”

Unfortunately, Pookie’s cousin and her emphatic use of Pookie’s name were not enough to stem the tide of rage that overfloweth from Pookie. She attacked the Korean Waitress. Korean Waitress, a surprise ninja, sprinted away. Pookie followed, swinging.

New Guy, the only one with his back to the action, suavely commented, “if anbody sees a gun, please let me know so I can duck.” We all laughed. Through the chaos, Peter found the salient point. He turned to me and said, “is New Guy funnier than me? I don’t know if I want him in the group if he’s funnier than me.” I, too, had my priorities in the right place. “I am concerned as well,” I told Peter. “This New Guy is disturbingly funny.” There was a strict comic heirarchy to our bowling group, and proper form was to be observed.

Meanwhile, Korean Waitress who turned out to be a surprise ninja managed to give Pookie the slip one more time. Then, in a move worthy of vintage Richard Dean Anderson, Korean Waitress vaulted the kitchen counter. Her lithe body perfectly swinging high up into the air, through the narrow channel, and into the safety of the kitchen. Pookie had been defeated, but she was slow to realize this. Pookie’s cousin, however, knew it was time to get. “POOKIE! COME ON, POOKIE! WE GOTTA GO, POOKIE! POOKIE! POOKIE! COME ON, POOKIE!” Reluctantly, Pookie allowed herself to be drug away by her cousin.

The restaurant breathed a sigh of relief and life continued on as though nothing had happened. Only Peter, his instincts forever sharpened by Vietnam, knew the truth. “This isn’t over,” said Peter. And he was right.

About ten minutes later Pookie’s cousin burst through the Denny’s double doors. She addressed us all. “POOKIE’S BROTHER DIED TONIGHT! HE GOT SHOT! SO DON’T YOU JUDGE POOKIE! POOKIE’S BROTHER DIED TONIGHT! YOU DON’T KNOW POOKIE! YOU DON’T KNOW NOTHING!” It went on at length. New Guy, his back to the front door and Pookie’s cousin’s soliloquy, wrly reminded us, “the gun thing? Yeah. Just sayin’.” We assured him we would let him know if he needed to duck.

Eventually, Pookie’s cousin left and we continued on with our dinner. We never saw Pookie or the New Guy again, which was just as well. Pookie was crazy and New Guy was awfully funny.