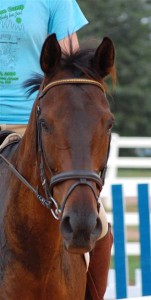 Recently, I’ve been handwalking my friend’s horse. We will call him Bob. (It’s not good form to out those with substance abuse problems.) Bob went into a period of stall rest as a very fit thoroughbred. As you can imagine, he has built up some excess energy during this time of recuperation. So to make these walks safe for Bob, safe for me, safe for surrounding inanimate objects, Bob goes into these walks drunk. Or rather, on acepromazine, aka ACE. Every horse reacts a little differently to ACE. Not surprisingly, the affable Bob becomes the 1,100 pound version of that guy we’ve all found ourselves babysitting at one time or another.

He comes out of his stall ready to rock. Head up, steps quick, I have to jog to keep up with his long-legged strides. “Where’s the party at?” Bob says. Adding a gratuitous, “WOOOO!!!!”

I determinedly try to steer him along a flat path. “C’mon, buddy, let’s just walk around in circles over here.” Suddenly, Bob makes a screaming right hand turn. “I WANNA GO OVER THERE!” he shouts. This, however, is better than the occasional screaming left hand turn he makes directly into me. He looks up, eyes bleary, “I totally didn’t realize you were there, man! I love you, dude,” Bob slurs. I give him a pet on the neck and assure him, “no blood, no foul,” and we continue on our weaving way.

Eventually, his pace slows. His head dives down. “Dead leaves!” Bob hollers. “I need to eat these dead leaves!” I haul on his head, trying to get him to lift it, “no, Bob,” I say, “you don’t want to eat those dead leaves, I promise you.” “Okay,” he agrees, once again walking full steam ahead. “A clump of hay! I DEFINITELY want this hay!” I let him stop and eat the three errant stems of hay. “This hay is so good,” Bob says. “This is the best hay I’ve ever had.”

Fifteen minutes in and Bob starts getting tired. “What if I just curled up and went to sleep here on the sidewalk?” he suggests. “You guys could come get me later.” I tell him this is not a good idea. “Let’s get you back home, buddy,” I say. With much manuevering we negotiate a little hill and he finds himself back in his stall. “Oh. I’m here,” Bob says. “Did I eat some dead leaves?” I assure him that no such thing happened, and tuck him into bed. “I could have sworn I ate some dead leaves.” I give him one last pet on the neck and tell him I’ll see him Friday. “It’s going to be awesome!” Bob yells. I agree, it will be awesome.

5 thoughts on “Conversations with a Drunk Horse”