April 11, 2011 April 11, 2011
*
WARNING – THIS IS A LONG, SELF-INDULGENT, BLATHERY POST ABOUT MY DOGS.
*
*
*
I have two dogs. They are named Shenanigans and Tom Foolery. Shenanigans is mostly black, Tom is mostly grey. Their mother, Angel, was a stray who spent a couple of years living in the barn of a friend. Angel looked like a Great Pyrenees, rough coated Collie mix, and I think that’s what she was. Angel, and her puppies, have the Pyrenees polydactylism. (aka, extra toes.) Their father was a purebred Australian Blue Heeler. So, what do you get when you mix Blue Heeler, Collie, and a Great Pyrenees? This.
* 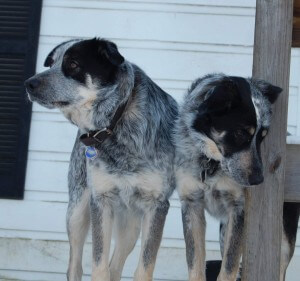 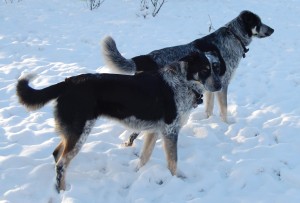 Shenanigans and Tom Foolery, side view.

You may be thinking to yourself, these aren’t very good photos. Don’t you fancy yourself some kind of amateur photographer? Didn’t you used to take pictures for a living? Is this the best you can do? The answers are yes, yes, and yes. It’s the best I can do because whenever I bust out the camera, they start playing a game Evan and I have dubbed, Call of the Wild. Likeaso: 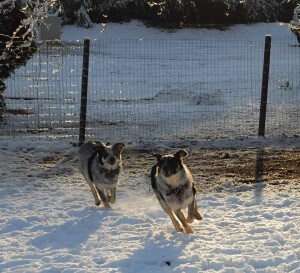 But more often it looks like this. Note who is in the lead (Shenanigans).

It goes without saying that people who love their children and/or pets will often see them in an overly favorable light. They think their child is the best/smartest/kindest/most creative/whatever. I’m no different. Except for one thing – I am actually right when I say that Shenanigans is the most athletic dog on the planet. She’s a true all-rounder, like Barry Bonds before the steroids. She can jump and she can run blazingly fast, but where she really reaches a supernatural level of ability is in her reflexes.

I submit as proof: one dead woodchuck, two dead rabbits, two dead field rats, countless dead squirrels and a handful of robins. ROBINS. Like, animals that can FLY AWAY. And these are all just animals who have happened to wander into the backyard. Essentially, if you cross into Shenanigans’ quarter acre piece of earth, you’re not likely to leave. And those are just the dead animals I know about it. Here’s the other thing about my dogs. They don’t just kill. They eat what they kill. All of the above are just the ones I managed to get a hold of before they finished them.

While Shenanigans is the star athlete of the two, Tom is the brains of the operation. (It’s very Pinky and The Brain, now that I’ve stopped to think about it. Shenanigans even drives Tom stark raving mad on a regular basis.) I submit this story as proof of Tom’s intelligence. On one blazingly hot August afternoon, I go outside to see what Evan’s doing in the shed. Shenanigans runs up, but not Tom. I instantly know something’s amiss, because this is literally the first time in three years that Tom hasn’t come running up to greet me. I ask Evan where Tom is. He says under the fig tree, because it’s so hot. “It’s not because it’s hot,” I say, “it’s because he’s got something dead under there.”

I call Tom and he’ll only come halfway to me. Tom is All Caps OBEDIENT, so now I’m certain he’s got something dead under there. Besides, he’s wiggling all over the place while saying, “Oh my gosh! Hi, so good to see you! Ha ha ha! Yeah, nothing to see under here! Nope, nothing! Ha ha ha! Nothing to look at here! No need to look! Ha ha ha!” I go in, expecting a squirrel. I find a woodchuck. Tom looks at it lovingly, and then turns to me. “Isn’t it the most beautiful thing you’ve ever seen?” Tom asks. “Yes, Tom,” I say. “It’s beautiful.”

Shenanigans runs straight to the tree. She will search it an additional 147 times over the course of the day. Tom goes straight to the deck, flops down, and enters into a depression. He never looked for that woodchuck. He knew it was gone.

What prompted this post was the murder of yet another rabbit last night. I went outside, found Tom on the deck. Shenanigans did not come running up. I know something is amiss. And then Tom starts in with the nervous laughter. “Ha ha ha! Good to see you! Good to see you! Ha ha ha! I haven’t done anything, just so you know. I’ve been on the deck the whole time. I didn’t do anything! Ha ha ha!” I look out in the darkness. The only thing I can see of Shenanigans is her white tail tip wagging. I flip on the floodlights. She has a rabbit. A really beautiful one, too. I’ve rarely seen such a large wild rabbit. I almost wondered if it was a domestic, and whether I’d find “Lost: Pet Rabbit” signs up around the neighborhood.

Shenanigans mournfully watches me bag up the partially eaten rabbit. When Tom comes too close she growls like she means it. This is HER good-bye moment. Not his.

Remarkably, as bloodthirsty as my dogs are, they are incredibly wonderful cat babysitters. They love our cats with a devotion that’s so sweet it’s almost sad. They have the herding blood in them deep, and pretty much the only time I can get a photo of Shenanigans that isn’t blurry is when she’s at watch over her flock of cats.

Tom likes the cats just fine, but Shenanigans worships them, with a keen maternal instinct. She knows it is of utmost importance that they never get near the road, and she endeavors to keep them out of the front yard. The other day, Spooky bolted the length of the backyard, headed for the front. A young cat in their prime can move astonishingly fast, and she had the jump on Shenanigans. Shenanigans set after her, looking for all the world like a wild dog in Africa about to take down a gazelle. I tensed, wondering if I was about to watch the horrific murder of my beloved pet by my other beloved pet. Shenanigans caught up with Spooky and in a haze of dust, came to sliding stop immediately in front of her, making a roadblock of her own body. Spooky collided with her, and then clutched the ground. Shenanigans wagged her tail and nuzzled Spooky. I could practically hear her say, “Don’t go out there, little miss! It’s dangerous! Now go on inside, and let mommy disembowel some more rodents.”

5 thoughts on “Shenanigans and Tom, Destroyers of Worlds”