Frequently, whilst out with friends, I will declare something the “Quote of the Night.” As we’ve not yet reached night today, I don’t know if the night will have a Quote of the Day, but the afternoon definitely did.

Many of you know that I act as driver to one Ursula M. Flower, aged 89, to her doctor appointments, occasionally to the grocery store, and also to CVS, that latter location about 52 times a week. I know the CVS well, my friends.

Ursula, who insists that I call her Grandma, and who, thanks to her shortness, everyone simply assumes is my Grandma, is a regimented woman. She eats the same salad every day – iceberg lettuce/roma tomato/hothouse cucumber with cucumber ranch dressing. She also drinks 4 oz of red wine every evening, strictly for medicinal purposes, doncha know. And once every so often, she likes a Mich Ultra. I guess she digs those rollerblading-at-lunch commercials.

Once, when coming out of surgery, the nurse told her she could have no alcohol for twenty-four hours. Ursula complained bitterly. The nurse thought she was joking. I was like, “Nope, girlfriend likes her evening wine.” It was great seeing the surprise on the nurse’s face. Ursula quickly, and vehemently, insisted that it was STRICTLY FOR MEDICINAL PURPOSES ONLY. IT’S ONLY FOUR OUNCES. IT’S GOOD FOR YOUR HEART. GOSH. EVERYONE KNOWS THAT.

Anyway. Today, I set off to Grandma’s house, such that I might take her to the chiropractor. I called her, to let her know I was on my way. It was then that we had the following conversation: 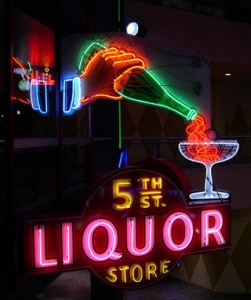 Holla! Me and Grandma Ursula at the liquor store, getting me a liquor!

URSULA: After going to Jason’s, could you take me to the liquor store? (NOTE: The chiropractor’s name is Jason Robeson. I call him Dr. Robeson. Ursula calls him Jason. Presumably because she’s 89.)

URSULA: I’m going to go visit my friend, and she likes sherry, so I want to bring her some sherry.

ME: Sure, Grandma, that’s no problem.

URSULA: I thought maybe I’d get myself some gin, too. Maybe even some vodka.

ME: Of course! It’s no problem!

URSULA: Okay, well, if you take me to the liquor store, I’ll get you a liquor.

ME: (Brain explodes with joy) HAHAHAHAHAHAHA! THAT’S A DEAL, GRANDMA!!!!

If you take me to the liquor store, I will get you a liquor.

You can’t make that up, ladies and gentlemen. That’s pure, distilled joy, in word form, right there.

For the record, I picked out a bottle of white wine on sale. 8 bucks, normally 12. Quite a fine tip, if I do say so myself. Although – and this is a true story – after the chiropractor and the liquor store, she did say, “Oh, and can you take me to CVS?” I, of course, gladly drove her to the CVS. I really want my own private room there, with a cot. That would improve my quality of life significantly.

In the meantime, I am compensated by such things as eight dollar bottles of pinot, and the sentence, “If you take me to the liquor store, I will buy you a liquor.”