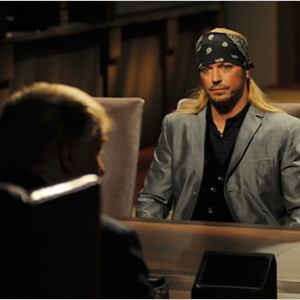 When did this happen? Seriously, I’m asking you. And don’t say the brain hemorrhage, because it had already occurred by that point. Had Bret Michaels not already become a national treasure, we really wouldn’t have cared. I mean, Gary Coleman just died, and as a nation, we were like, “mmm… yeah… bummer.” But Bret Michaels has a brain hemorrhage and it’s like, “screw coverage of the oil spill in the Gulf, NATIONAL TREASURE BRET MICHAELS is in peril!”

I am not immune from this phenomenon. It seems like yesterday I was turning my nose up with much judginess at Rock of Love (a show I still find abhorrent) and then somehow I magically started watching Celebrity Apprentice, ostensibly to see Cyndi Lauper, and then, all of a sudden, I’m rooting for Bret Michaels and then I AM VERY CONCERNED about his health and before I know it, I am actually caring about whether Bret Michaels wins a completely and totally bogus promo package disguised as a reality show and helmed by Donald Trump. I ACTUALLY CARED.

All of this led me to a most disturbing point yesterday afternoon, wherein I posted a comment on People.com saying that if Bret Michaels was the new Idol judge, I’d watch the show again.

What has happened to me? Seriously, I’m asking you. What happened to my pride? To my elitist disdain of Bret Michaels, let alone American Idol and People.com? When did I buy stock in National Treasure Bret Michaels? I can’t be certain, but I think it was around episode 5 of Celebrity Apprentice. To begin with, he annoyed the bejeezus out of me. I’ve worked with people like that, who talk and talk and talk, who use buzzwords ad nauseum, who never met a point they couldn’t belabor. Then two things happened. Firstly, I realized that nobody on the show treated others with more respect than Bret Michaels. He was gracious to the graphic designers, the editors, the guy holding the boom mic. Secondly, I think he improved. He became more effectual and less talky. He offered an appealing package of work ethic, self-deprecation, enthusiasm, and decency. Plus, he seemed so happy to be on Celebrity Apprentice. God bless ’em, you know?

Then there were the photos of him in the hospital bed WEARING THE BANDANA. That’s a dude who lives the dream, right there. And I have no doubt he is a very tough guy. I couldn’t live on the road the way he does. I couldn’t maintain such a good attitude after how many weeks of promoting random products through oddly painful tasks on the Apprentice. I would be surprised if his toughness didn’t help him through the brain hemorrhage. I suffer no illusions – Bret Michaels’ life would have broken me many times over, and maybe even killed me. I can’t help but respect him.

And finally, there was his duet with Casey on Idol. I didn’t watch the finale, but I saw a highlight reel. All the big stars had their moments alone, but Bret shared the spotlight with the blonde guy from Texas, the guy with the goat voice, who, mysteriously, was presented to me as though I should find him attractive. I didn’t, but I am sure he’s a very nice fellow. Seems to play the guitar well. Anyway, that moment summed up Bret Michaels for me, the National Treasure Bret Michaels I’ve come to know and respect – enthusiastic, tough, and generous.

I’m not going to lie. What I wrote on People.com is true. If Bret Michaels replaces Simon Cowell, I will totally watch American Idol again.