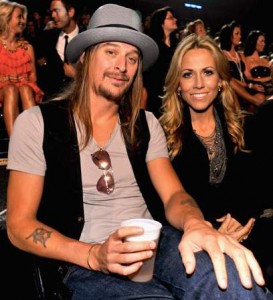 No joke - this picture triggers my gag reflex.

There is a song that has been simultaneously entertaining and annoying me for eight long years. Sheryl Crow and Kid Rock’s “romantic” ballad/duet, “Picture.”

Let’s start by drinking in the following series of words: “Kid Rock’s romantic ballad/duet.” That right there is worth the price of admission, provided “admission” is listening to the song for free in your car. Because I mean, hey, I’m sure I’m not alone when I say Kid Rock personally defines my romantic ideal. Am I right, ladies, or am I right?

So there’s that. And the song, on the surface, is an inoffensive enough little ditty, so uncomplicated it wouldn’t strain even Britney’s vocals. It’s the kind of song that slips by unnoticed, unless you make the mistake of listening to the words. Let me give you a condensed version of Kid Rock’s side of the story:

Fair enough, Mr. Rock. You’ve obviously suffered a bad break-up and are now engaging in a downward spiral of self-destruction wrought of heartache and loss. And now for the lady’s take:

Pretty much the same story. Makes sense. After the break-up, she longingly wonders where he has wandered off to and what he is doing. She, too, finding false comfort in some random person. Fine.

Here’s my issue: THEY’VE BEEN SEPARATED FOR THREE DAYS. 1,2,3. THREE DAYS. THAT’S IT. Here’s how the song closes.

Both: Since you been gone my worlds been dark & grey (72 hours of dark and grey, ladies and gentlemen.)
Kid Rock: You reminded me of brighter days (Was it that hard to remember? IT WAS THREE DAYS AGO.)
Crow: I was headed to church
Rock: I was off to drink you away!

I just included that last little bit ’cause it’s hilarious. Anyway, back to business:

Both: I thought about you for a long time (THREE DAYS, PEOPLE.)
Can’t seem to get you off my mind (NOT SURPRISING.)
I can’t understand why we’re living life this way (Well, based on how you handle the passage of three days, perhaps because you’re RETARDED.)
I found your picture today (You FOUND it? You put it away the day before YESTERDAY. Do you have short term memory loss?)

In case you doubt my timeline, here’s what I cut out:

Rock: I ain’t seen the sun shine in 3 damn days

Crow: I called you last night in the hotel
Everyone knows but they wont tell
But their half hearted smiles tell me
Somethin’ just ain’t right
I ain’t heard from you in 3 damn nights

I submit this as evidence that we are, in fact, talking about the transpiring of no more than 72 hours. So what I want to know is, who are the people this song speaks to? Who out there lives life with the drama dial turned all the way to eleven, such that they can cram more histrionics into three days than I’ll put into ten years? I mean, by day two these people have reached an emotion it would take me two months (or more) to get to. SO FOREIGN TO ME. SERIOUSLY. I mean, I’m not trying to be Judgy McJudgalot. Diff’ent strokes for diff’ent folks, and all that. I’m just saying, FOREIGN. Also, I would submit the word, EXHAUSTING.

3 thoughts on “A Lot Can Happen in Three Days. Apparently.”