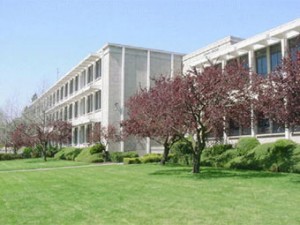 Kennedy High. One time, I threw a frisbee out of one of the third story windows. I also used to jump off this handrail into those bushes. It was funny, because it looked like I was going to die, and then I'd completely disappear into the hedge. Miraculously, I never got hurt doing that.

The best class I ever had was at Kennedy Catholic High School in Burien, WA. It was called Moral Decision Making. Doesn’t sound too exciting, does it? Sounds opposite of exciting. It sounds excruciating. It probably would have been, had the class been in the hands of a less capable teacher. As it was, Moral Decision Making (I & II) was taught by Mr. Brian McCluskey.

He was not my favorite teacher. That was Mrs. Giles, my 7th grade science teacher. She taught me a tremendous amount, gave me much needed love and affirmation, and exuded joy. But as much as I enjoyed Mrs. Giles, no teacher made a bigger impact on me than Mr. McCluskey. In fact, I’d venture to say no one impacted me more, save my parents. It’s a big claim, I know, but here’s why I make it – Mr. McCluskey taught me how to think.

On day one, Mr. McCluskey taught us about something he called the “Pyramid of Opinions.” The idea being that there is one best opinion. For example, let’s say people are arguing about how the government should handle a problem. There will be a best opinion out of the group, never multiple best opinions. In other words, screw relativism. It may not always be easy to discern which is the best idea, but there is a best one out there. It was our job, in Moral Decision Making, to hash out who had the best opinion.

A typical day would begin with Mr. McCluskey solemnly handing out a sheet to each student. On each sheet was a detailed scenario describing a thorny ethical problem. Frequently, they were real life cases. We’d read in silence and then make notes. Over the year, we covered just about every controversial topic you can think of. Abortion, drugs, death penalty, euthanasia, you name it. After making our notes, Mr. McCluskey would make opening remarks, then he’d tell us where the Catholic Church stood on the issue and where he stood on the issue – because those were not always the same stance. His willingness to share his own unorthodox views (although to be fair, he was no radical by any stretch) set a tone of freedom of speech and the students exercised it – with vigor. After Mr. McCluskey laid out his opinion, he’d open up the topic for discussion.

To this day, that classroom remains the pinnacle of intellectual rigor and integrity in my life experience. On the one hand, it’s a sad thought – a bunch of high school sophomores expressing themselves with greater dignity and honesty than any group of people in my adult life. On the other hand, I wouldn’t be surprised if most everyone goes through life having never experienced anything like it. It was a tough, pull-no-punches sort of environment, yet unfailingly respectful. We were passionate, but not personal. Confident in our own take, yet willing to listen. If only all the world could be like Mr. McCluskey’s classroom.

On a personal level, I wasn’t a favorite student of Mr. McCluskey’s. I like to fight. Back then, I liked to fight even more, and I was born with innate certitude about my own righteousness. It wasn’t often that I crossed a line in that room, given the precision with which he governed the space, but sometimes my natural aggression got the better of me. Toward the end of the semester, we held debates in lieu final exams. We were randomly assigned a position by drawing a piece of paper out of a basket. No matter what your own beliefs, you had to argue the side you drew. So, you might be fervently anti-drugs because your dad OD’d, but if you drew full legalization, you were arguing full legalization.

I happened to draw pro-life in the abortion debate, which was more than fine by me. The person opposing me happened to be pro-choice. Our debate was a feisty one. At the end, we fielded questions from the students. One girl questioned me, and within the context of her question she shared the fact that she wished her mother had aborted her, instead of giving her up for adoption. She was, in essence, sharing a suicidal frame of mind. My response, delivered none too kindly: “Everybody has a burden to bear.”

Mr. McCluskey held me after class and said, “Don’t you think you were too hard on her?” I said, “No,” and just left.

Obviously, I am not sharing this story because it makes me look good. The point is that it is a weakness of mine. I can be cold and hard. My feeling can too easily drift toward, “Life is tough. Be tougher.” Up until Mr. McCluskey came along, I didn’t question this inclination toward hardness. It’s just the way I was and I didn’t think there was anything wrong with it.

But there was another semester waiting for me in Moral Decision Making II. It was pretty much just like the first one. There was no dramatic turning point, no sudden realization, but over time who Mr. McCluskey was as a human being made an impression. From him I learned that compassion is a greater form of strength than declaring one’s righteousness. I learned that people from opposing viewpoints still had much to teach me. I learned that quiet confidence is the best position to argue from and that sometimes, we are not called to argue at all, but just to love and accept and be still. He became my role model, the one I still look to today. I frequently fall short of the standard he set, but I never stop trying to reach it.

The spirit of intellectual integrity that pervaded Kennedy Catholic High School remains the high watermark in my life experience. The teachers there did not operate from the defensive crouch that I’ve seen in many churches since. Instead, there was a bright, shining confidence about the way we celebrated our faith, and that spirit allowed us to embrace the world. I believe Kennedy in the mid-90’s would have pleased Pope Francis greatly, because it was with that sort of joy and courage that the school operated.

The summer following my semester of Moral Decision Making II, Mr. McCluskey found out he had cancer. He passed away in 1996, leaving behind a wife and four kids. He was only 38 years old. I was extremely blessed to have had the opportunity to be taught by him. It’s hard to imagine what my worldview would be like now, without his influence.

“Where your treasure is, your heart will be there also.” – Matthew 6:21

Yesterday, I finally got paid. In case you’ve been playing along at home, yes, it took them four months to pay me. But in any case, I now have the check in hand. The very best thing about being single with my own money is that I can do whatever it is I want to with it. So, the first check I am going to write will be to St. Anthony’s of Padua Catholic School in Greenville, SC. The teachers there don’t make much. They’re there because they love to teach. That’s how it was at Kennedy, too. Mr. McCluskey could have made more in a public school. But Catholic Moral Decision Making isn’t a class they offer and he had a calling. It makes me happy to think I can help support teachers like him. It’s the least I can do, considering all he did for me.