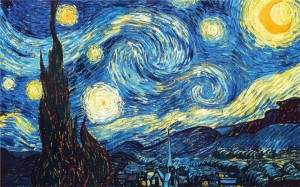 On the Facebooks I like to post poems. Most often without comment, sometimes with a line or two of introduction. For a long time now, I’ve been wanting to post my favorite poem. I love it wholeheartedly. I love every syllable of it, every sentiment of it, as I discern those sentiments to be. It is a poem set in summer, so now, in the cold, cold, cold of January, it seems the right time to talk about it.

So, without further ado, my favorite poem:

Tomorrow when the farm boys find this
freak of nature, they will wrap his body
in newspaper and carry him to the museum.

But tonight he is alive and in the north
field with his mother. It is a perfect
summer evening: the moon rising over
the orchard, the wind in the grass. And
as he stares into the sky, there are
twice as many stars as usual.

That’s it. Just four sentences. I can recite it from memory. The first time I read it, about three years ago now, maybe four, it hit me so hard it was like a physical blow to the face. It took a good twenty or so readings before the physiological symptoms left me. I can read it now without my body doing strange things, without a change in heart rate or adrenaline. But that’s more than three years into it.

For almost as long as I can remember, I have self-identified as a freak. As a coping mechanism, I learned to speak human, and I’m pretty fluent. You probably wouldn’t even know it’s not my native language. But I assure you, it isn’t my mother tongue. Before I spoke human, I spoke freak. It’s why I loved reading about The Elephant Man, why I loved Ripley’s Believe it or Not, all stories of the strange and tales from the fringes. It wasn’t my address, but it’s where I lived.

The world is ambivalent about freaks. Packaged in the right way, they’re embraced and celebrated. Turn it a hair, and they’re reviled. Especially in school. Life can look pretty bleak, especially caught in a place that rewards mainstream exceptionalism. And if ever there was a place that rewarded mainstream exceptionalism, it’s school. Indeed, school can be bleak for a freak, and there is something about bleakness that brings you up close to death. Maybe it’s because you feel like you’re not really living. In that life of not really living, you can look over the edge and see the other side, get familiar with it.

And that’s where this poem starts. With the inevitable. With death.

But it is no ordinary death. An ordinary calf would have been buried. This one will be saved, wrapped in newspaper and taken to the museum. Because make no mistake, there is no lack of egotism to the freak. Along with the oddball, misfit sense of rejection, there is also a sense of perverse superiority. If you are shunted to the side, is it because you’re worse than everybody else, or because you’re better? Freaks have a sneaking suspicion it may be the latter.

Even so, the second and final stanza hits closer to the heart of the matter. The summer evening is perfect. The perfectness of the summer evening into which he is born bestows upon the calf a benediction of perfection – despite his apparent, and massive, imperfection. His mother is there and there is a feeling that he is loved. That all is as it should be. And whenever is that the case? That everything is as it should be? For the normal, let alone the afflicted? But in this brief moment in time, it is more than simply as it should be, it is extraordinary, for when he looks into the night sky, there are twice as many stars as usual.

That, I believe, is the suspicions of freaks everywhere. That though they might be strange, and live a more brutal life than average, there is this secret benefit – they see twice as many stars. What is done with that vision varies from one end of the spectrum to the other, but at best, all those extra stars turn into works of art, scientific discovery, new philosophy. At worse, well, bad things. Those stars seen through a damaged kaleidoscope can morph into hellish visions, too often acted upon in this fallen world.

In the end, I’m really not much of a freak. Which I am more than fine with. The freakier one is, the greater the potential for good or ill. But I have enough in me than I can see it and identify with it. I certainly identify with Laura Gilpin’s “The Two-Headed Calf.” Thanks for reading my favorite poem and my thoughts on it. Your time spent on my self-indulgence is much appreciated.

2 thoughts on “Freak Show, or, My Favorite Poem of All Time”