There’s this guy I know named Nick Shaheen. Nick is a stand-up comedian. He’s the kinda guy who collects nicknames. The Godfather, The Falcon, Game of Shaheen, Nick of Thrones. Sometimes he wears a Members Only jacket. Sometimes there is a sleeve of Fireball mini bottles in the interior pocket of that Members Only jacket. The last time he hosted and I performed was on Valentine’s Day. After my set, he told the crowd that I was easy and they should buy me shots at the bar. It was funny because Nick knows I’m not and also because I got two free shots at the bar. 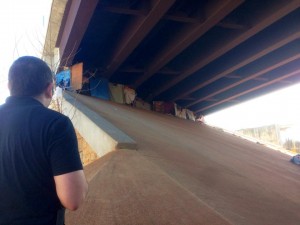 Nick Shaheen at Tent City. Antonio chooses to live up here instead of down below. It is quieter, safer, more protected.

Nick is also the guy who reached out to the comedy community when Moo-Moo got leukemia, arranged a hospital visit and stay connected. So it didn’t surprise me when The Falcon suggested we put on a benefit for Greenville’s Tent City, or, as the residents refer to it, “Under the Bridge.” Along with our friend Tom, we threw out ideas as to how a comedy benefit might work, but it was a busy time for everybody and the conversation stayed just that.

A couple of weeks later, on March 3rd, I got an email out of nowhere from the inimitable Ben LeRoy. The subject line was sort of Pink Floydian (Are you out there?) but once I opened it, things took a turn for the Liam Neeson (Where are you?). (Answer: I was in my parents’ house filming exit interviews for a reality show. You know, typical Monday afternoon.) A few minutes later, Ben called and told me about Be Local Everywhere. Over the course of 2014, Ben is volunteering in all 50 states. He said, “You’re in charge of South Carolina. So, what are we doing?”

I paused, Ben mentioned an emphasis on homelessness, and BOOM! The Falcon’s idea returned to me. I pitched the under the bridge benefit to Ben, he loved it, and we were set for March 30th – the day Ben would be in South Carolina.

With only 27 days to organize, Shaheen and I hit the ground running. So far, we’ve been incredibly fortunate with how things have come together. Jason Fletcher, who owns High Street Hospitality, donated the use of a beautiful venue, The Loft at Falls Park. (South Carolina people, may I encourage you to go feast at The Green Room, Sip or Ford’s Oyster House?) Jason’s event coordinator, Candy, is volunteering her time to help us set up. The bartender, too, is a volunteer.

We needed comics who could commit to the date on the spot, and we were lucky to get a great line-up, with Tom Emmons, Shivani Nadarajah and Cary Goff. For the purposes of this event, we are claiming North Carolinian Cary as one of our own. (Asheville, Greenville, all ends in Ville…close enough, right? Much more importantly, Cary is a great comic who was on board with the mission.)

Yesterday, Shaheen and I paid a visit to Tent City to get a lay of the land. I spent most of my time talking to a man named Antonio. He lives in a wood shelter, maybe eight by three, kept neat and clean. He was reading when we got there and books lined the walls. Soft-spoken, articulate, intelligent, Antonio answered my questions about Tent City with candor. I wanted to ask him, “How did you end up here?” and “Why have you been here so long?” But I kept the conversation pragmatic. 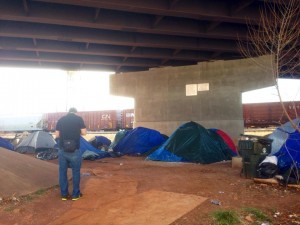 The majority of the people live on the level ground beneath the bridge.

Nick, who had been taking photos, wandered back our way. After a little more conversation, Antonio asked Nick if he’d like to take pictures of his place. It was obvious he very much wanted his place photographed, but the question was quiet, hesitant, a request from a man used to disappointment. Nick told him he didn’t have a flash and therefore couldn’t capture the interior, but quickly added, “I can take pictures of you, though.” This pleased Antonio. When Nick raised his camera to take the shot, Antonio posed, lifting his open book and gazing upon the pages.

Antonio wanted the photo to be of him reading.

What better way to lay claim to his dignity as a human being than to be seen reading a book? Antonio is a smart man. A smart man who loves books. I want to help him and the other people who live under the bridge. I hope you do, too.

Join us Sunday, March 30th, 7:30pm at The Loft at Falls Park. Tickets are $25. To purchase tickets or make a donation go to: www.UnderTheBridgeBenefit.com

3 thoughts on “The Falcon, The Bridge & The Return of Ben LeRoy”