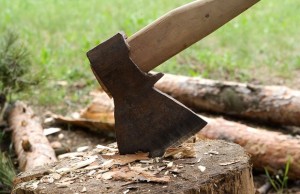 Did you know “let the chips fall where they may” refers to woodworking? I thought it was a poker reference, but then I realized that made no sense, so I looked it up.

I make New Year’s resolutions. Once, years ago, I was at Mary Tannery’s house a few days after New Year’s and I was stressing over how to make two people get along, and I wasn’t even a part of the issue. I just felt it was my duty to bring peace to warring factions and my failure to do so brought me some pretty intense anxiety. Mary, in her inimitable way, pointed out what I was doing and how it brought needless negativity into my life. At that moment, I made my first real New Year’s resolution – to stop indulging my Middle Child Syndrome, as I referred to it. And I did. It wasn’t perfectly easy, sometimes I would still experience anxiety, but whenever I did I reaffirmed my resolution. That day and that decision changed my life for the better. Since then, whenever I am moved to make a resolution I do so – and stick to it. This is another New Year’s with a resolution attached.

I’ve been mulling this one over for awhile. My resolution is to be more honest. And even that right there kind of sucks, right? To be more honest sounds like a cop out from the get. But there are situations that require discretion. For example, I once had a friend struggling in a relationship. I had an opinion about it, but I kept it to myself until he asked for my thoughts. I stand by that decision, because if I’d been honest with him before he was ready to have that conversation it wouldn’t have produced anything positive. As it was, the talk was very beneficial.

And here we enter into my complicated relationship with the truth.

Of course, I don’t know of anyone who is 100% honest all the time. That’s just not how society works. I really don’t know how I compare to others, but I do know that back in the day, I had a Machiavellian streak a mile wide. It is my Scorpio nature. Over time, my Machiavellian streak became increasingly benevolent – the outcome I was maneuvering for was what I believed to be the best possible outcome for everybody involved. Frequently, my finagling was, in some ways, very self-sacrificial. I’d put myself through hell in the process of trying to secure the ultimate good. But it never even occurred to me that my judgment might be off as to what that ultimate good might be. Hashtag hubris, hashtag ego, hashtag pride. The idea of simply being completely honest and letting the chips fall where they may was terrifying to me, because then I would get the wrong result. Hashtag stupid, hashtag hindsight is twenty twenty, hashtag this is a true story.

^ this is mostly about my marriage, but it’s also about some work situations and such.

After my marriage failed, my reflexive Machiavellian streak continued on. Early on in my days in my comedy community, a friend observed, “you’re a con artist.” And I remember thinking, “How do you know that? You’re not supposed to know that, nobody knows that.” However, there is a positive flip side for my innate talent for such things – it makes me a good producer. All of the things that made me a good con artist – reading people, spotting their talents, motivating them – became increasingly funneled into things like putting on comedy shows, book signing events, you name it. And as that energy was turned toward the good, I found I has less and less energy for con artist shenanigans. If you’re wondering what my con artist shenanigans might have been, let’s just say I really, really wanted to be on Survivor. And to this day I genuinely believe I would have been awesome at it.

These days, however, are different. I am tired. And the things I once worked so hard to make happen no longer hold any value for me. Truthfully, I’ve been in the process of becoming more and more honest for a long time. Some things, though, are still tough for me. I hate conflict. Especially in this world today. People argue so poorly. I miss the smart debates I had in high school. And how sad is that? High school should not be the high water mark of respectful intellectual debate. It is emotional trench warfare on social media these days. I am not sure the best way to be honest and productive in such venues, but I feel like I could do better. In my relationships I am also a lot more honest than I once was, but again, I could do better.

So, to be honest with you, I rather dread implementing this New Year’s resolution. My promise to stop my Middle Child Syndrome only required me to ghost away from conflicts that didn’t really involve me and then not worry about it. This is tougher. This is wading into conflict and facing rejection. Rejection sucks. I really don’t like it. Who does, right? But some tolerate it a lot better than others. I’ve never been in the business of sticking my neck out and inviting it to be chopped off. And I don’t know if that’s exactly how I’d describe this effort. I think the other idiom works better – letting the chips fall where they may.