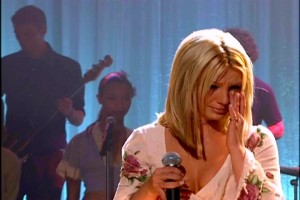 Britney Spears in the movie Crossroads. She’s crying because she just read this blog post and she’s like, “Wow. This is really sad. But at least Carrie enjoyed the good times while they lasted.”

Once upon a time, Britney Spears made a really terrible movie at Summit Entertainment. It had Dan Aykroyd in it. On the plus side, it had a good title. Crossroads.

A couple of weeks ago, it hit me that I was at a crossroads myself. Like a lot of realizations, it arrived in slow motion, long after I should have realized it. Semi-recently, I moved to Greenville. Prior to that, a lot of my best friends moved to Colorado, Tennessee, North Carolina, Georgia, you name it. Other friends found themselves with new babies or in new relationships, marriages, or jobs. Change was afoot.

I am a big fan of change and very anti-stagnation. So with every friend who found themselves embarking on a new adventure, I rooted them on and wished them well. My beloved C.S. Lewis once observed, “Love is not affectionate feeling, but a steady wish for the loved person’s ultimate good as far as it can be obtained.” I love my friends, and was happy for all the good change that had come their way, so I didn’t quite notice until late the game that we’d hit the end of an era.

Of course, I too am culpable. Comedy and career took up massive amounts of my time and that certainly played a role. But I am less interested in the post mortem than I am in an examination of how awesome it was while it lasted. The parties we had! The characters! The best sitcom writers in America could not have invented Brenden or Dinger. From the lake days at the cabin to the Halloween parties, these were glorious occasions, with glorious people. Let it never be said that we didn’t know how to celebrate. It was truly the tie that bound us together. It was a beautiful friend family I had in Clemson.

To me, it is notable that nothing has rushed in to fill the gap. They say nature abhors a vacuum, but the vacuum has only sucked harder (she says eloquently) as time as gone on. If you know me at all, you know how I’m given to look to Providence in all situations. The quiet has been useful. My writing goals for the fall are only borderline achievable at best, so it is good that I am where I am. I’m in prep mode. For what, who knows? Hopefully something good, something fun and adventurous.

All the same, I won’t lie. I miss the calls for everybody to rally at Nick’s because someone had a rough day. I miss chatting with Chris McCune while running into twenty other people I know and love. I miss seeing Alrinthea pull into my driveway, making a surprise visit. I miss regular Coffee Club with Bo and Debbie. I miss my people. Even Darren.