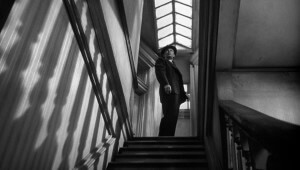 A still from Force of Evil, which Polonsky wrote and directed. This film was part of the birth of noir.

Abraham Polonsky has been on my mind lately. A lot. So much so it’s kind of weird.

Polonsky was one of the great gifts of my education at USC Film School. He taught a class called Content & Consciousness, but the class was really, “Come Absorb Hollywood History.” Polonsky was a pioneering writer and director. You know the look of film noir, with the one key light and the sharp contrasting shadows? You have Polonsky to thank for that. Polonsky inspired generations of filmmakers after him, including Scorcese, who made a documentary about the man.

Just like his signature lighting, Polonsky was a study in contrasts. A tough guy from the Bronx, he taught himself French by reading Proust with a French to English guide by his side. His heroes were like himself, bruisers with brains. A great hero who served in the OSS during WWII, Polonsky later became a blacklisted screenwriter. He loved to tell the story about how he was grilled before the House UnAmerican Activities kangaroo court. One senator asked questions pertaining to Polonsky’s secret service in WWII. Polonsky, knowing better than the senator that such information was still classified, refused to answer. A man appeared from the wings, whispered in the senator’s ear to tell him he was an idiot and needed to shut up, and the senator angrily declared that Polonsky was the most dangerous man in America. Polonsky loved it. 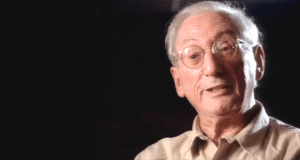 But his stories that meant the most to me were the ones about his wife, Sylvia Marrow. They were married for 56 years before she passed away in ’93. She was the kid sister of his best friend and perceived as a pest until suddenly he realized she’d become a beautiful young woman. One day they decided to get married and did so promptly at local courthouse – no muss, no fuss. While Polonsky was writing great films like Body and Soul, Sylvia was pursuing her own artistry as a ballerina. She later added archeology to the mix, studying Native American ruins in Central America.

Polonsky said that the happiest times in his life were following her through the jungle.

I loved that image, and the fact these two wonderfully vibrant, dynamic people created a life of adventure together. He talked a lot about her in the classroom. So much so it felt as if she was still alive. Polonsky and I were very different politically and religiously. He came from Jewish-Russian stock, but was a proud atheist. That said, he talked movingly about the conversation he had with Sylvia on her death bed. He told her that we are all made of star matter and to the stars we would one day return, and that at some point in the future he would find her there and they would be reunited. Polonsky died in October of ’99 at age 88, not long after I graduated college. I hope he and Sylvia have had the reunion he hoped for.