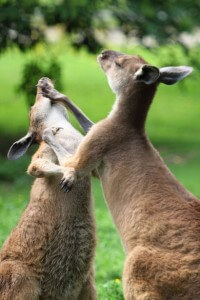 The Fightin' Roos are at it again!

Before I launch into the third rant in my ongoing series of foisting unwanted marriage advice upon my beloved readers, I want to tell you a little bit about myself.

From the first, I found dolls insulting. If you gave me a doll, I’d literally be insulted. Dolls were for girls, I’d think, blithely unaware of the implications of that thought. As a very young child, I liked to pretend I was a New York cabbie named Bill. I was obsessed with He-Man and Transformers. I dreamed of becoming a wide receiver in the NFL. In the 5th grade, I got to write my first “paper” on the subject of my choice, which meant I got to write about Muhammad Ali. I asked for, and received, a heavy bag and boxing gloves from Santa Claus. In high school, after one semester of weightlifting, I could curl 75 lbs. I could go on, but I think you get the picture. It does not take a rocket scientist to figure out that I carry more testosterone in my body than the average woman.

(Side note – God bless my parents, especially my mother, for letting me be me, without a second thought about it.)

Head’s up about this post – this is going to be geared toward women. There’s not much in here for men, unless they want to eavesdrop. Which is fine. I’ve had a lot of comments on this series and only one of them has been from a dude. Might as well focus in on the target audience. By the way, ladies – all of the below presupposes the idea you’re married to a decent human being. If you’re not, well, that’s a whole other blog post.

A couple of stories.

After exiting Marriage Destruction University, I spent a lot of quality time with Father Pat, who is awesome. I want to share his observations on the issue. “Men are like dogs. Dogs have three modes, and you can judge which mode they’re in by their tail. They’re either wagging and happy, or they’re at rest, or their tails are tucked between their legs. So many wives think they can train their dogs by keeping their tail tucked between their legs, but it doesn’t train them. It just makes them withdraw. A woman’s job is make her husband’s tail wag, leave him alone when he’s at rest, and if something needs to be addressed, do it in a way that isn’t belittling.” He also made the comment that men compartmentalize. Everything is stored in separate boxes. Women, on the other hand, are like a clothesline. Everything is on the clothesline. When one too many things is placed on that clothesline, the whole thing sags to that lowest point. Everything goes down once the clothesline is overwhelmed. It’s the man’s job to come along and put some helium balloons along the length of the clothesline, to lift her up and keep her buoyant.

I became obsessed with “Naked and Afraid,” a pretty rad show from The Discovery Channel. It featured professional survivalists, one man and one woman, dropped into a harsh environment to survive for 21 days. They would meet for the first time upon arrival. These people were tough. Super tough. Extremely knowledgeable, experienced survivalists. Here’s the thing – it invariably took about five minutes for their dynamic to revert to something very primal. I formed a bunch of opinions based on watching these couples interact, but here is the most important thing – one of the most crucial ingredients to success for these couples was how good the woman was at making the man’s tail wag. The women formed the emotional foundation of the enterprise and when they successfully empowered their partner, everything worked so much better. For whatever reason, ego works differently in men and women – and that’s okay. I’m sure there are exceptions to the rule, but by and large I believe it to be true and I don’t think the answer is to try to force an artificial sameness. Basically, what I am trying to say here is – life is really hard. If your man kills a small snake for dinner, be like, “That’s the best snake ever.”

I used the snake reference because the roughest episode took place in Costa Rica. The guy killed a fer-de-lance with a stick. With a stick! Incredibly aggressive, deadly snake. Kills it with a stick. It was a big snake, too. He cuts off the head, skins it, brings it back and the woman immediately commented on how small it was. Their 21 days didn’t go very well.

All of the above resonated with me because I have been guilty of them at one time or another. In hindsight, it is easy to see how damaging it is to be oppressive instead of empowering. So, to recap. 1.) That tail tuck thing, you guys – it’s oppressive. You know what else is oppressive? 2.) Nagging. If a guy is resting, let him rest. 3.) It is good to empower a man to be just that – to be a strong, capable, confident man.

We’re gonna get real here, kids. Much like Salt n Pepa in the 90’s, we’re going to talk about sex. I have a theory about the sex lives of over educated married people of a certain age. My theory is, thousands of years of oppression + feminism = the woman’s opinion on sex is sacrosanct. It isn’t, btw. Your body is sacrosanct. Your opinion on how your married sex life should go is decidedly not. That, my friends, should be a team decision. There is, no doubt, way too much sexual violence against women. But this isn’t what I am talking about. I am talking about a healthy married sex life. I think as a culture we’ve weirdly conflated the two, such that over educated married women of a certain age are overly empowered to call the shots on how their sex life goes – and if they don’t have a problem with only having sex however many times a month, then their spouse shouldn’t, either. And I get it – kids and work and life tires you out. But the truth is, where you put your energy is a choice. And the other truth is, your kids and work and life will be better, brighter, and more vibrant if you have a thriving marriage. The third truth is, your sex life is an important part of that thriving marriage.

I was struck by something watching a Dr. Brene Brown TED Talk. Dr. Brown studies vulnerability. While listing the things that make people feel the most vulnerable I was surprised to hear that chief among them was initiating sex with a spouse. After I thought about it for a minute, it made perfect sense to me. Keep that fact in mind. Initiating sex with their spouse brings many people to their most vulnerable place. This takes me back to Part I – Be Kind.

This has gotten crazy long. I’ll be back with the fourth and final bit of unwanted marriage advice later this week. Love you all.