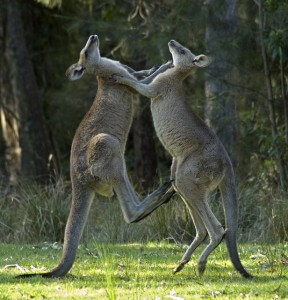 Last time I posted to the Fanfreakingtastic blog, I talked about divorce, Marriage Destruction University (Home of the Fightin’ Roos!) and slicing meat. If you didn’t read it, please check the previous installation of Marriage Advice You Don’t Want, Part I before reading Part II.

Also – if you feel like You Are Wrong, if you’ve internalized that message – watch out. Resentment is around the corner, if not already present. We know we are meant for better things than to be made to feel that we are wrong.

But here’s the deal.

When things are going in the wrong direction, there’s the temptation to “be kind” and not name the wrongness for what it is. I put “be kind” in quotes because it’s not kindness at all. Compassion may be a contributing motivator, but ultimately it’s fear that’s driving that bus.

Mike Birbiglia, a comic I’ve long admired, made a movie called Sleepwalk With Me. It’s well worth watching, especially if you’re a comedian. (Totally beside the point of this blog post – every time he speaks directly to camera it is a genius act of storytelling, moving the narrative forward and addressing a problematic protagonist. Super well done.) But I digress. Aside from being an inventive indie film about comedy, Sleepwalk With Me also beautifully captures the problem of “being kind” in lieu of being honest.

Another honest Mike I admire is Mike Tyson. After his recent press conference in which he confessed to falling off the wagon, Iron Mike sat down with Annoying Matt to address his sobriety and other issues. From the 2:50 to the 4:30 mark in this video Mike Tyson pretty well sums up everything I want to say in this blog post. I’ve long marveled at Mike Tyson’s amazing gift for honesty. It’s not an area I excel in, so I find it fascinating, as well as inspirational.

Anyway. Enough of honest celebrities and back to personal observation.

Here’s a thing, a general rule of thumb, if you will. The harder something is to say, the more it probably needs to be said.

Here’s another thing. You can’t reshuffle the deck until all the cards are out on the table. You can try and try and try and try to start over again, but if there are cards held back, you’re never going to play a fair game. It will be weighted to one side or the other – it will a rigged game. And that is an exhausting game to play. It’s exhausting for the person holding back the cards to keep the game straight and it’s exhausting for the person who doesn’t have all the cards and can’t figure out why the game isn’t working.

Which takes me back to my first point. Be kind. Not with quotes around it. Be kind for real. Part of being kind is being honest. Being vulnerable. Being like Mike Tyson. There is nothing that makes one more vulnerable than putting all your cards on the table. Because you’re holding them back to protect yourself, ultimately. You may think you’re protecting your spouse, or your marriage, but you’re not. You’re protecting you by trying to control the outcome.

Along with being right, I was a big believer in knowing the right way things should go. If they were going in the wrong direction, I was going to steer them straight. Even if it meant taking a ten pound wrench and forcing the stuck wheel in the direction I felt it should go.

Whenever she’d say that phrase, I’d feel myself exhale, letting some tension go along with it. There’s a lot of stress out there for people who are right and who are responsible for making sure things go in a righteous direction. I mean, that’s a big deal, you guys. But I did get the concept of letting go, at least on a smaller scale. It wasn’t until my third semester at Marriage Destruction U. that I got the idea that it applied to the big stuff, too. That it wasn’t my job to steer the whole wide world and everybody in it – just me. That my job was just to be kind and kindly honest. My job was to take all my cards and put them on the table, face up, knowing there would be ramifications for those face-up cards, but knowing that it was the right thing to do. Most importantly, it was my job to let go and let God and have faith in the outcome – even if it wasn’t the one I wanted.

(On another note, I confess to spending an inordinate amount of time looking at pictures of fighting kangaroos. Choosing just one to adorn this blog post was the hardest decision I made today.)