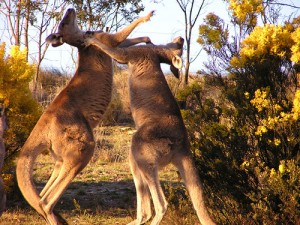 You'd think I'd get tired of looking up pictures of Fightin' Roos. I do not.

Many of you have taken the time to comment/send me a message about my series on marriage advice. Based on reader feedback, I want to throw out a couple of clarifications.

Firstly, a lot of people had a hard time with the “make his tail wag” thing. Before I launched into that, I wrote, “All of the below presupposes the idea you’re married to a decent human being.” I meant that. If you’re being emotionally abused by someone, then no, don’t grovel around trying to make him happy. But if he’s a decent human being, you better believe that I think a woman is best served by trying to empower the man she’s married to.

Here’s another thing – we cannot change anybody but ourselves, but love is transformative. I’ve had the experience of watching my parents’ marriage evolve over my lifetime. They’ve been married almost 50 years now. Every year of their marriage they get better at being married. It’s not easy. Their marriage is not easy. But by relentlessly staying in the fight – by relentlessly choosing kindness, honesty and love – they’ve transformed one another. Personally, I believe their faith enables this transformation. But wherever you want to put the credit, the fact is – these things are possible. These things are real.

What I’m trying to say is, you can take a decent human being and help them become the fully formed person they’re meant to be. Isn’t that a big part of what marriage should be? Enabling your partner to become who they really are? And allowing them to help you become the person you’re supposed to be? And I maintain that ego functions differently in men and women. I would say that men need to be bolstered and women reassured, generally speaking. A grand oversimplification, of course. But I am speaking generally.

Also – the inverse of the above is true, too. You can take a decent human being and make them smaller. The scary thing is, it’s not hard to do. We are always in the process of becoming. We are also always in the process of helping our spouse become the best version of themselves or we are in the process of diminishing them. If there is one point to all of this marriage advice it is: Take heed – it is easier than you think to diminish your spouse. You can be a wonderful human being and still manage to cause significant damage.

Secondly, I appreciate some comments that I read as rather protective of me. I love my fierce friends! They are awesome! And so I wanted to explain my approach. When I started this blog, I was uncomfortable with the public nature of the thing running alongside my own sometimes caustic sense of humor. I made the decision that I would never write anything negative about a private person. (By that I mean, someone not famous. I made one exception for a server named Blake. I stand by that post.) Evan is a private person, ergo I am not going to write anything negative about him. More importantly, I don’t want to write anything negative about him. We are still friends. I feel like I understand the demise of our marriage and I think with understanding comes peace. This understanding doesn’t feel like blame to me – because I don’t blame Evan and I sure as heck don’t blame myself. But in going through Marriage Destruction University I feel like I learned some things. That, to me, is interesting. Things that are actionable are interesting. I find all of this stuff interesting, not sad. Which may be weird, but hey – I’m weird.

Anyway, just so you know I am on the level about this, here are some things about my performance at Marriage Destruction University that are pretty awesome.

I was willing to change my mind.

That, right there, is huge. Once I realized there were problems, I did a bit of an ostrich act for a month or so, but then I got to work. I was willing – and able – to examine myself and make substantive changes. I think that is pretty awesome and amazing. I don’t think there are a lot of people who do that. I think a lot of people cling to what they’ve been doing, somehow hoping that change is going to come, anyway. I think a lot of people get wrapped up in their own ego and get strangled by fear. To be sure, y’all, it’s bad. Marriage Destruction University is a mind-numbingly terrible place to be. It’s scary in there. Like, watching The-Exorcist-when-you’re-eight-years-old scary. It takes a lot of courage, determination and intelligence to learn inside an hostile environment and then apply that knowledge.

I was willing to fight to the death.

Arguable whether or not that’s really a good thing, but I’m still proud of it. Marriage Destruction University is an exhausting place to be. It takes deep reserves of energy to not only keep going, but to keep trying. I tried each and every day. I’m a freaking hero, you guys. A freaking hero.

So, I don’t look at the failure of my marriage as a personal failure. I look at it as an epic voyage into the wilderness, forty days spent in the desert. When I was out there, I found some really fascinating things, so it’s only natural to want to be like – Check this out. I found some fascinating things! Lots of times, though, what’s fascinating to one person is not at all to another. So, there’s that.

None of the above is to suggest I escaped unscathed. I certainly did not. Bad habits were formed, old insecurities reborn. Again, Marriage Destruction University is a terrible, terrible place. But it can also be a place of a learning. On account of being pretty awesome you better believe I tried to mine all the good I could out of the bad.

I have one installment left.

Thank you all for reading. <3

5 thoughts on “A Bold Declaration of My Own Awesomeness”