There are times when you regret naming your cat after a 14th Century Polish monarch. Like when she is dying of cancer and the receptionist won’t stop trying to say her name. “Jad Why Gee?” she asks. I correct her. By accident of immigration, she has grown up here, in the Deep South, surrounded by Scotch-Irish and English surnames. “Ged Vee Gee?” she tries again. I correct once more. She doesn’t know me, we have been referred here for tests. She doesn’t know how to see a J as a Y. She doesn’t know the cat is dying. But I do.

The name is Jadwiga. YAHD-VEE-GUH. Jadwiga’s namesake was crowned Rex of Poland in 1384. She was neither a king (being female), nor Polish (being Hungarian-Bosnian). But Jadwiga, the Girl King of Poland, grew into a most noble monarch; a saint, in fact. She was short-lived, but she did much in what time she had. Jadwiga the cat did not. But she was similar to her namesake in her temperance, in her patience and in her sweet acceptance of the world around her. If Jadwiga had been a poem she would have been a haiku. Spare, but all the more beautiful for it.

We watched her come into the world, the runt of her litter. She was born March 10, 1999. Mama Cat, the feral cat we had taken in off the streets, lured in by cans of tuna fish and eventually trapped and tamed, had six kittens. Evan chose Jadwiga and she became his first cat. As a little one she was loving and independent, the only kitten who preferred to leave the others in order to sleep next to you. When Mama Cat fell ill two weeks after having her kittens, Evan and I became surrogate mothers to the litter. They all survived. They all grew up to be extremely loving cats. As Evan said, “we domesticated the hell out of them.”

The litter came of age in time for graduation. We were adults now. We found the kitties homes, but Mama Cat, Jadwiga, and Little Bastard stayed with us. We moved innumerable times that first year. Westwood, Hollywood, Santa Monica, Big Bear, back to Santa Monica, Hollywood again. No matter where we went Jadwiga took it in stride. Another day, another home. As long as she had her Evan she was content. As a young, slender cat she liked to drape herself across his shoulders like a living mink stole. Life was good. We were a full house – a pair and three of a kind.

Over time we moved yet again, to South Carolina. We took in other cats and dogs. They came and went, but the original quintet never changed. Some cats, like Napoleon, Jadwiga hated. Other cats, like Max, she got on with splendidly. Being only human, it took me a long time to recognize the pattern. If Evan had a special affection for the cat, Jadwiga hated him or her. He had chosen her first. She was his, and he was hers.

With time and contentment came weight, and little Jadwiga, runt of the litter, became Big Wiggy. She enjoyed being brushed and rolling around on her back in the sun. She loved her shearling cat beds and her window seat. But most of all she loved her Evan. Her favorite time was when Evan would read in bed and she’d curl into his lap. Her devotion was constant.

Encouraging her sedentary nature was the arthritis in her shoulder. She began going into the vet about once a quarter for a shot to alleviate her condition. It helped a great deal. Always on a diet, Jadwiga came in for a shot and was found to have lost weight. I was happy. Finally, I was getting somewhere. I’d also noticed new behaviors – she wanted to lay on the heating vents or on my computer. At night she slept between us, under the covers, her little head alongside ours. This made sense, considering what a cold winter we’ve had. 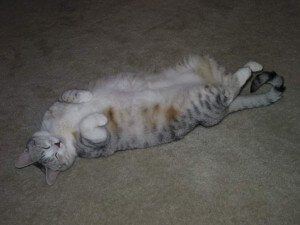 A kind, quiet cat/There is a certain, simple/Elegance in that.

Two days after the routine vet visit I took a hard look at Jadwiga. I was becoming suspicious. A handful of days later and we were back at the vet. By then I already knew. Even so, I was shocked to learn she’d lost a pound. There were tests and x-rays and ultrasounds and all of it confirmed what experience had led me to think – she was dying. There were two rounds of fluids and B12 shots and steroids that bought her two weeks of happy hours laying in the sun, rolling around on her back. But she was fading fast, losing a pound a week, and neurological problems set in. She was losing coordination. She was holding her head at an angle. Her right eye began to weep.

Happy hours dissolved into discomfort. It was time. Our vet came to our house, as he always does, and Jadwiga, Girl King of Poland, was eased out of her suffering, and the quintet was no more.