The Great Flu of 1918 2010 struck Sunday morning, not long after I’d eaten a bowl of Fiber One. I fear I will never enjoy you again, Fiber One. No, you were not the primary culprit in my suffering, but you were an accessory to the crime. The surprise attack came, as most surprise attacks do, without warning. After the initial volley I was able to fire off a few emergency e-mails. “TO KOURTNEY. STOP. WE ARE UNDER ATTACK. STOP. WILL NOT BE ABLE TO TAKE KIDS TO SCHOOL. STOP.” I wrote a blog post about Lindsey Vonn under a bizarre nausea haze, but before I could proofread and hit publish, I was under siege. I knew that this was no measely 24 hour bug thanks to the person who had given me this gift. (Looking at you, DEB.) She had already given me the lowdown on the progression of hostilities. I knew I was to be France, and Germany (ha! Get it? GERMany?) was about to have its way with me. 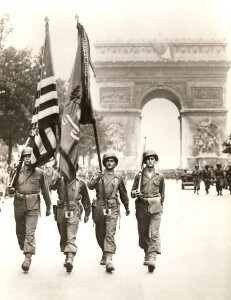 The Liberation of Paris

After the blitzkrieg was launched in earnest Evan found me on the bathroom floor, unseeing eyes staring at the ceiling, gurgling. If I had been 27 and a revolutionary rock god that surely would have been the end of me, but luckily I am a small town 33 year old, so I was safe from death by choking on my own vomit. For my part, I came to like so: “Why is my bed so hard? My back already hurts. The bed shouldn’t be so hard. Why is the ceiling different?” And then Evan saying, “are you seeing me now?” I was, and I remembered I was at war.

I passed out again, and again, and made another suicide attempt via taking a nosedive into the pedestal sink. (I still have a nice goose egg on my skull on account of that little manuever.) I had no defenses worth mentioning. Sure, I had looked healthy, but that apparent health was nothing but a Maginot Line, something the enemy forces simply went around, with their Panzer tanks of destruction and doom. Soon enough they were in Paris, and I was left an incoherent muttering mess, unable to say words, let alone complete sentences.

The occupation was long and sad and dreary. And actually, it’s not even really over. But I know the Allies are coming. Rumors have been spreading. I can hear them even now. They will bring with them the ability to eat hamburgers and chocolate and all will be good again. Godspeed, boys, Godspeed.

2 thoughts on “The Battle of France”