Is that a long enough blog post title for you? I hope so. 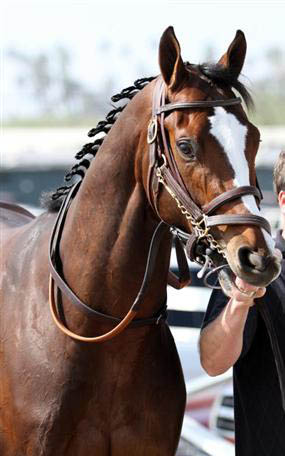 Word on the street is that Bodemeister is kind of an idiot.

So, the West Coast! Bob Baffert has a loaded hand this year, but in my opinion only one of his many Derby prospects is worth discussing, and that’s Bodemeister. DEAR LORD, you say, THAT’S A HORRIBLE NAME! Yes, yes it is. This poor colt is named after Baffert’s youngest son Bode, who in turn is named after the Olympic downhill skier. Bodemeister is also owned by my least favorite owner in the business, Ahmed Zayat. (If you want to read an earlier rant about Zayat, go here.) As an additional karma impediment, you have Mike Smith agreeing to ride a longshot in the Derby (my favorite longshot, in fact) and then reneging in order to ride Bodemeister. Also, Giacomo aside, it’s always been my feeling that Mike Smith and the Derby just don’t get along very well. Kind of like Pat Day, who did eventually get a win on Lil E. Tee. Which just goes to show, horribly named horses DO win the Derby sometimes. So, why talk about Bodemeister at all? Because he did this in the Arkansas Derby. He didn’t just beat that field, he destroyed it. And while it can be argued he wasn’t facing the cream of the crop, he carved out steep fractions and then closed well. You also have the following paradox – rarely do horses win by open lengths in the final prep then win the Derby. However, for a front running sort like Bodemeister, that trend actually reverses. Winning Colors and War Emblem, for two examples, were front runners who won their final prep by open lengths. So, is it a good thing or a bad thing that Bodemeister won so impressively? A case can be made either way. Interestingly, Bodemeister, who is bred for the distance, has been loving the Churchill surface in his work outs leading up to the Derby. Some horses hate Churchill, so this is an important consideration.

You can’t talk about the West Coast without talking about Creative Cause. The stalwart gray has danced every dance, finishing third in the Breeder’s Cup Juvenile to Hansen and Union Rags. The thing about the Creative Cause is that unlike his tenacious sire, Giant’s Causeway, he doesn’t seem to like a dogfight. When the chips are down, Creative Cause seems to say, “Ehh…I think you want it more…” Out of eight starts, he’s won four, finished second twice, and third twice. And he’s never far behind even when he loses. But this is a horse worth mentioning, as he’s very talented, has a tremendous foundation in him, and figures to be right there at the finish. I’m just expecting him to get second or third. 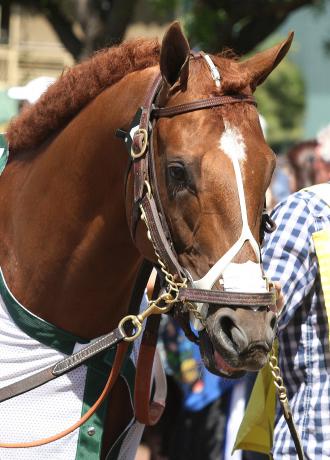 Doesn't I'll Have Another have a beautiful eye? So intelligent!

Now, onto my favorite West Coast horse – I’ll Have Another. This beautiful chestnut presents an intriguing picture. Firstly, no horse in the Kentucky Derby is better bred for distance than this guy. His bloodlines are a who’s who of classy stamina. If he doesn’t win the Derby (and stays sound) the Belmont is right up his alley. Secondly, this horse strikes me as super intelligent. Just the way he carries himself, his expression while racing – I get the feeling that this horse knows his job very, very well, which is surprising, as he is so lightly raced. But in the Robert Lewis stakes, where he was 43-1, he won by daylight and did so with his ears pricking. In the Santa Anita Derby, he had to run down the tough Creative Cause, and did so with his ears flat back, his expression pure grit and determination. He’s a big, pretty, grand looking chestnut, and he is loved to death by his jockey, the complete unknown Mario Guiterrez. Mario came to the tough Southern California racing circuit having ridden some in Vancouver, Canada, which means less than nothing to the sharks in Cali. Mario was barely getting by, just galloping horses, when owner Paul J. Reddam saw him. He said to his trainer, Doug O’Neill, that he liked the looks of Mario, and if they ever got in trouble maybe they could use him. Well, Mario got a chance to gallop I’ll Have Another, and he was blown away. His enthusiasm for the horse helped convince O’Neill to take a chance in the Robert Lewis Stakes, and when they couldn’t get top jock Rafael Bejarano to ride, Mario got the mount. Happily, Mario retained the mount in the Santa Anita Derby, and piloted him perfectly to the win. Mario’s joy after the race, and his love for this horse, was something to see. Also filled with joy were the hundreds of friends the owner brought to Santa Anita. This horse isn’t named “I’ll Have Another” for no good reason. Reddam brought six buses of friends to the track. Remarkably, I’ll Have Another the horse handled the drunken winner’s circle craziness like a champ. He’s a smart horse, as I said before.

So, what are the downsides, here? Well, for one thing there’s a reason he’s so lightly raced, and that reason probably has to do with soundness. He recently experienced tight back muscles after a work out, and underwent shockwave therapy to ease the tension. Additionally, he’s doing all of his prep in California. 18 of the last 20 Derby winners have prepped at Churchill Downs. Finally, O’Neill, the trainer, is not known for his success outside California. He trained the famous Lava Man, and had notoriously struggled to duplicate that horse’s success outside his home turf. (Interestingly, the now retired Lava Man acts as I’ll Have Another’s pony, and leads I’ll Have Another to the gate on racedays. Apparently, the two horses get along very well.) Obviously, I have a lot of love for this horse, but he’s definitely up against it for a few reasons on Derby day. Here is his Santa Anita Derby win. Please watch Mario’s reaction afterward! 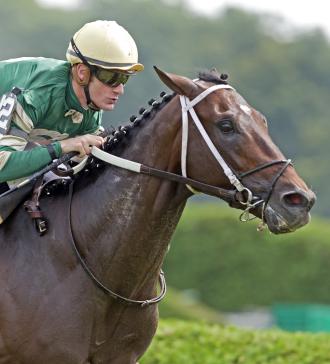 Rounding out my highlighted West Coasters is the tragically named Daddy Nose Best. Who comes up with these names? Seriously? Who took this big, beautiful, bay horse and gave him this name? Anyway. Remember the longshot Mike Smith abandoned in order to ride Bodemeister? This is the horse. Now, for the record, Daddy Nose Best has been ridden by Julian Leparoux, who will stick with Union Rags for the Derby. Mike Smith had never even been on the horse when he punked out. Luckily, Garret Gomez snatched up the ride, which I think is for the best. Garret, imo, is a better rider than Mike, and Garret has made a lot of noise about how he wouldn’t trade horses with anybody. I can see why. Daddy Nose Best, unlike Creative Cause, is willing and able to win in a dogfight. By the way, Garret is leaving nothing to chance, and is getting to know the colt by riding him in his preparatory work at Churchill Downs. The Derby will be their first race together, but he’ll know the horse by then.

Daddy Nose Best is out of a mare named Follow Your Bliss. My parents used to say that to us a lot growing up, and so the mare’s name has special meaning to me. Moreover, she lives in Camden, South Carolina. Her sire, Thunder Gulch, won both the Derby and the Belmont, so there’s a lot of distance blood in her. Daddy Nose Best was purchased for only $35,000, and considering he’s already banked over half a million, it’s looking like a pretty good deal. He won both the El Camino Real Derby in Northern California and the Sunland Derby in New Mexico, both wins coming after intense dogfights. Now, these are not exactly racing meccas, and this is why he will be a longshot on Derby day. 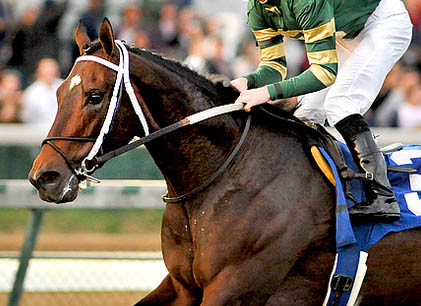 I also really liked this pic of my favorite longshot.

Daddy Nose Best is trained by Steve Assmussen, who I just don’t get. I think he mishandled the ever living holy heck out of Rachel Alexandra, and I don’t understand why people think he’s so great. He certainly floundered around a lot with this horse, starting him sprinting, then trying him on dirt, turf and synthetics. On the plus side, the horse is sound as a dollar and tough as nails. He’s had more races than anybody else in the field, and he’s finally found his groove going long on dirt. Steve has said Daddy Nose Best is a smart horse who likes to take in his surroundings and is very consistent. “He never has bad days,” according to Steve. He’s definitely been training well at Churchill. To get a sense of Daddy Nose Best’s commitment to the win, check out his El Camino Real Derby win.