This year’s edition of the Run for the Roses is both a tale of two horses and an endless array of potential victors. Here, in part one, we shall discuss the Hansen and Union Rags, tent pole horses the both of them.

Hansen as a two-year-old, just before the BC Juvenile. He's even whiter now.

1.) We will start with Hansen. Last year’s two-year-old Eclipse Award winning champion, Hansen did a most unusual thing – he moved on from two to three, proving himself to be a fast, classy, and consistent colt. It is exceedingly rare these days for the two year champion to make anything of himself as a three year old, but Hansen has done so, through raw heart and determination if nothing else. He has finished second twice and won the Gotham in fine style, actually laying off the pace before making a move. This is the only time Hansen has successfully relaxed in a race, for his modus operandi is to go to the front and go as fast as he can for as long as he can, hoping to hit the wire first. The horse is all heart, and he gets little respect from the experts. The feeling is, Hansen won’t last the mile and a quarter, and with other speed horses in the race, he won’t get an easy lead, either.

The lack of respect for Hansen goes deeper than that, though. His two-year-old season started out at Turfway Park, running against less than awesome competition. When he beat the favorite, Union Rags, in the Breeder’s Cup Juvenile, people were quick to say it was because of the poor trip Union Rags had. There is also the fact that Hansen, though almost white and therefore quite flashy, isn’t a big or handsome colt. And last of all, there is the fact that Hansen is owned by a world class moron named Dr. Hansen. Dr. Hansen insists on having a cadre of Hooter-esque women, dressed in the stable’s colors, lead the horse out to the paddock. Moreover, he has repeatedly tried to dye the horse’s white tail blue. In short, the man is completely devoid of good sense and decency, and is always looking to make a spectacle of his colt. Hansen the horse is an animal with a lot of dignity. He tries his heart out every time. I take a lot of umbrage at the way his owner treats him as a self-promotional tool.

In conclusion, Hansen undefeated as a two-year-old, stakes placed and stakes winning this year, will enter the Derby as the Rodney Dangerfield of the field. He is small, short-necked, too intent on the lead, might have distance limitations, and is owned by an idiot. But I have nothing but respect for this determined competitor.

As a side note, Hansen is ridden by world class jockey Ramon Dominguez. However, Ramon is coming off an injury, and this concerns me. Hansen will be 100% coming into the race, but will Ramon? He rode in the Wood Memorial, and his performance on second placed Alpha left a lot to be desired. Luckily, the injury was minor, a separated collarbone, and likely Ramon will be ready to give it his best shot on the first Saturday in May. 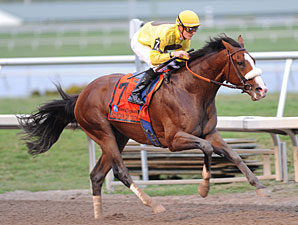 2.) Secondly, we have Union Rags. Union Rags is everything that Hansen is not. He is an enormous, gorgeous horse, with bold bay coloring and striking white markings. He looks like a Derby winner, he is trained by Michael Matz, who brought Barbaro to the Derby in 2006, and he is owned by normal people. They’re so normal I don’t even know who they are. He is ridden by the Frenchman Julien Leparoux – sometimes well, sometimes poorly.

As a two-year-old, Union Rags won the Champagne and the Saratoga Special in New York, stamping himself as the establishment favorite. In the Breeder’s Cup Juvenile, he came up just short, losing to Hansen. As a three-year-old, he devastated the Fountain of Youth field. He then entered the Florida Derby, everybody’s favorite to win. Unfortunately, Julien ran into some serious “race riding.” Which is to say, other jocks conspired to keep him pinned down at the rail with the favorite. Then, on the turn for home, Julien did that awkward dance thing. Should I go inside? Outside? Inside? Outside? Union Rags is a big horse, and none too handy. After Julien finally committed, it took the bay colt too long to get rolling, and he wound up third. Was it a bad third? No. Does it mean he won’t win the Derby? No. But it does reveal some weaknesses. Although one could say the Florida Derby was a good learning experience. Just ask Michael Matz, who said, “The good part is I hope that Julien learned about the horse a little bit more…The good thing about it is Julien will put himself in a better position where he won’t let that happen again…I’m sure Julien is harder on himself than everyone else is and that he should have got him running a little bit more at the beginning.” Heh heh heh. For a guy as diplomatic and nice as Matz, that level of criticism is like a string of curse words.

Additionally, it could be argued that it is Union Rags who might be a little short on stamina for the mile and a quarter. His pedigree doesn’t say he can’t do it, but it doesn’t scream that he can, either. In conclusion, in Union Rags you have a similar situation as in Hansen – a talented, consistent colt, but one with some question marks.

If you have a few spare minutes, catch yourself up to date on their signature races: