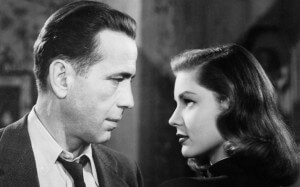 Bacall & Bogart: Both of them so stone cold. <3

Once upon a time, in 2002, Lauren Bacall entered a Restoration Hardware in Beverly Hills. She was wearing a cape, and swept about the store in dramatic fashion, at one point pausing to point at a blue gingham table cloth to say, “That is precisely the color of Gary Cooper’s eyes.”

She then collected a wide variety of items she wanted, asked for them to be sent to her hotel, and disappeared, leaving a cloud of befuddled retail workers in her wake. They figured it out, though, even though it was a request and a behavior from a bygone era.

I was not one of those who waited on Lauren Bacall, but I treasured the story. (Lest treasured in my memory is the occasion wherein I stared at a very angry Priscilla Presley, while thinking, “YOU HAD SEX WITH ELVIS. WHAT’S WRONG YOUR MOUTH?!? YOU HAD SEX WITH ELVIS. WHAT’S WRONG WITH YOUR MOUTH?!?” in an endless loop. Priscilla, meanwhile, was not currently invested in either her mouth or Elvis, but rather getting throw pillows delivered to her mountain cabin, a mundane situation I struggled to focus upon, given the far more pressing mouth and Elvis issues.)

Yesterday, Robin Williams died. Like the rest of America, and especially like the rest of America who happens to be in their 30’s and also a stand-up comedian, I was deeply impacted by Robin Williams. As a little girl I was obsessed with Mork & Mindy. I remember being so excited that he was in a movie, Good Morning, Vietnam, I couldn’t wait to see it. I was eleven when that came out. Awakenings, Dead Poet’s Society, eventually Good Will Hunting, anything good with Robin Williams in it was a huge deal to me.

But when he died I felt nothing but grim recognition.

Death wears a variety of costumes and that one is an outfit I know well. Milling around an open mic hours after the news was released of his suicide, I was surprised to hear a lot of comics were surprised. How can you be a stand-up and not know?

To me, that sort of Death walks into a room and you give him a curt nod of recognition. He is a man you loathe, but you respect his power. And, if you’re me, or, I’d submit, just about any other stand-up comedian, he is someone you know well. Not that I’ve personally known so many who have taken their own life. But I’ve fought for far too many would-be suicide victims. Certainly, enough to know the score.

I think that for anybody who hasn’t personally met a celebrity, their death is a totem. For me, despite all Robin Williams meant to me, especially growing up, his death was an emblem of a bigger issue. On Facebook, I’ve read many of my comic friends recounting their experiences meeting him. I was surprised and not surprised to learn how incredibly kind and grounded, real and humble he was with every comic in every green room across this country. His generosity meant so much to every comic he touched, and I feel for those who lost something much more personal than a totem.

Lauren Bacall was the same thing to me, a totem. But her death hit me far harder than Robin Williams’. Lauren Bacall was mean and fierce and a little bit crazy. She was talented and smart and profoundly unapologetic. She was confident and sexy and a legend in her own time. A legend before she was 21. How tough do you have to be to wear all of that your entire life and wear it well? Lauren Bacall tough. After all, she was the one who gave the Rat Pack its name, and when it formally organized she told a reporter its purpose was to “to drink a lot of bourbon and stay up late.”

When Humphrey Bogart died, he was interred with a charm bracelet he’d given Bacall before their marriage. It said, “If you want anything, just whistle.”

It took a long time, but he finally whistled for her.