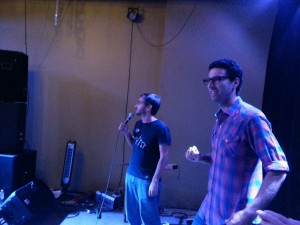 Myq and Zach about to battle. Nick Shaheen took the pic from stage.

It’s been tough few weeks for a lot people I know and love. For me, too, by the transitive property. But yesterday was a great day. So I’m going to tell all y’all about it. Why? Because I want to.

Started the day with huevo rancheros (sans tortilla). It’s taken awhile, but I’ve finally perfected the taste of Los Angeles in my South Carolina kitchen. Every morning, it takes me back to one of my other homes. It’s a bittersweet sort of happiness, but worth experiencing. On the sweet side of it, it makes me think of breakfasts with my writing buddy Karen Barna. Who is awesome. On the bitter side, makes me miss all my LA peeps.

I wrote. Right now I am carving out rough drafts, which is my favorite thing, as well as working on an adaptation, which is fun, too.

Learned a great piece of news about a friend. Their business, not mine, so I won’t go into it here, but after so much sorrowful news, it was wonderful to get a beam of sunshine. It brightened my entire day. It makes me so happy when my friends are happy.

I did the Cross Fit with BOTASTIC at Jason Tsai’s direction and felt like I was going to die. Nothing like almost dying to let you know you’re alive.

Then I had lunch with Kate Sullivan, who is a DELIGHT, and super smart and charming and she studies fascinating things, and it’s no wonder my boy Brenden fell in love with her and made her his bride. Again, nothing makes me so happy as when my loved ones are happy.

Wrote some more and did the business emails. Working on putting a comedy tour together, writing stuff, etc. I love getting stuff done. Feels good.

Getting ready for comedy, I listened to Michele Scheve interview Tom Emmons and Art Sturtevant on Asheville FM. Art and Tom are a part of my comedy family and this year they got into Laugh Your Asheville Off, hence the interview. It was so great listening to them! Michele is an excellent interviewer, and Tom and Art played off each other very well. It also reminded me I need to be recording my sets. As they talked about the importance of recording yourself, I made a solemn vow to start doing just that.

I then went to comedy at Independent Public Alehouse. Not just a regular old show, but an amazing awesome show put on by Nick Shaheen. Myq Kaplan, Zach Sherwin, and Micah Sherman had once again rolled into town, and once again I got the honor of opening for them, along with my buddy Andy Cummins. (My third time!) It was great seeing them again, and Myq and Zach celebrated the success of selling Ruthless with me. You gotta love it when biggest, best and most talented comics are also the nicest. I heart those guys!

I got to hang with my girl Courtney Steadman, who I love and adore, and I participated in the following conversation.

Fray Forde, my comedy son, arrived with Lil’ Scovel, aka, Chaz Scovel. Courtney and I were talking with Myq Kaplan. I introduced Fray and Chaz to Myq, complimenting their comedy as I did so. Fray immediately downplayed it, while Chaz said that he needed more praise than I’d delivered. Myq commented about how they went opposite directions on that, and I put my hand on Fray’s shoulder and said, “And that’s why I love Fray. He’s a better person.” And Chaz rejoined, “And that’s why I’m a better comic.” Myq mimed dropping a mic. End scene. (I love stand-ups.)

I heard word from Art he was about to perform in front of 500+ people – his show at the festival hit maximum occupancy. I was so happy for my boy Art!

I forgot to record it.

(I did, like an idiot, forget I wasn’t hosting, and got all hosty at the end. Totally screwed up my dismount. In my defense, I host a lot. Still though – sorry rightful host and MC Nick Shaheen!)

After I got off stage I had several people give me compliments, which is the best. 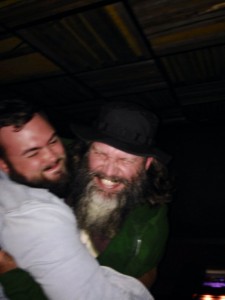 Asheville comic Jason Webb was feeling very slappy last night. He said once I've been doing comedy for one more year, I'll get to be included in the slapping. Pretty exciting stuff. (Please note, all people in this photo are adults at a show in progress.)

I then got word from Cary Goff I could perform in Asheville. Cary is not just one of my favorite comics but one of my favorite people and it’s always great to share the stage with him. It was sad to leave the show at IPA, but performing twice in one night is super great, and I am all about super great, so I drove on up to Asheville. I paralleled parked like a boss (as I usually do), but on this occasion, a large group of women were coming up the street. I saw them watching me and I heard one say, “Look at her parallel park!” So I made eye contact with her and bowed. They all applauded. It was amazing.

Once at the Disclaimer Lounge, I discovered Josiah Duckett, who can’t do a Manchester accent even though his parents are from Manchester, was hosting. (Manchester is my best UK accent, so I like to torment him with it.) I watched the audience for awhile before I got on stage, trying to figure out what the people wanted. It was a pretty quiet group. I decided on my Ambulance Men 5K set, which went really well. It felt good to have solved the question of what it was they were in the mood for.

I forgot to record it.

Later on, I wound up having an impromptu dance party with two random women at the bar. There was no music, so we chanted, “No music, no music, we don’t need no music,” and danced to that. After we were done dancing, they told me they really liked my set AND mentioned sets I’ve done in the past, which kind of blew me away.

I then got to see Cody Hughes perform. Cody is a genius. A year ago he hid himself away in Chicago, so it’s been a long time since I’ve seen him perform. Last time was in Madison, WI, actually. Last October. It had been too long since I’d seen the man in action. <3 me some Cody.

En route to the after party, I discovered book blogger Tez Miller had found the Ruthless book trailer. I didn’t even know Simon & Schuster had uploaded it already. So that made me feel kinda famous and stuff. And I’ll be honest, I’m never adverse to feeling a little famous and stuff.

Following that, I got to hang out with the Toms (Emmons and Scheve) as well as Art. It had been a minute since I’d caught up with Scheve, who is always fun, and we all got to read a giant article written about Art in Asheville’s paper. So good to see one of your own celebrated. As a side note, a Greenville stand-up would have to set themselves on fire to make our paper. The Greenville News is the worst.

Got home a little after three.

You’d think you couldn’t improve upon that day, but upon waking I learned from Courtney that after I left the IPA show there was a rap battle. As much fun as I had in Asheville, I found myself awash in regret. Not only was there a rap battle, but Andy and Nick got to join Myq and Zach onstage for it. I could have been up there!

And then Courtney said, “They dedicated it to you.”

I was like, “WHAT???” And then, remembering these are comedians, I said, “Was it mean or nice?” Courtney said, “It was nice. Myq rapped about how sweet you are.”

Which just goes to show, Myq Kaplan doesn’t know me very well, and in the middle of a very bad few weeks, you can have a good day.

3 thoughts on “Today was a Good Day”