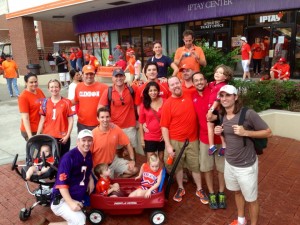 Some of the people I love.

So, I went a’hobo’ing across this great country of ours. Learned some things. Middle America – it’s not doing well, guys. Like, at all. On the plus side, I saw a vast flock of grackles descend upon a harvested corn field in Iowa on a dark gray afternoon. It was in October and it was the most Octobery thing I’ve ever seen. I could go on about the sights. I could also go on about how lovely it is to live without any sort of plan and let serendipity be your guide. I could go on about how nice it is to be alone in the middle of Utah without another soul for miles. Maybe at some point I’ll back track and talk about those things, but for right now I want to talk about the one thing I am really proud of.

I’ve had a nice success recently (a book of mine sold) and along with a nice success comes nice compliments. For example, “You’re a really good writer!” I hear that and I think, “Well, I was born with a talent for visual arts that I never fully developed, but the pictures never stopped coming, so I wrote stories around those pictures instead. Language is H-A-R-D for me and it was a process of practice and practice and more practice until I found a way to communicate images by using words. Even so, practicing with words was still easier than practicing with paints, so I took that path of least resistance.” So, “You’re a really good writer!” is nice to hear, but it’s a lot more complicated than that.

Here’s what I am really good at.

I am really good at finding people.

Not in a Dog the Bounty Hunter way, but a “I see them when they’re standing in plain sight” sort of way. I am a talent scout for awesomeness, awesomeness I collect and keep, like so many shiny things in my nest.

If I’ve done anything good in this life, it can be found in the friendships I’ve made with an assortment of extraordinary people. (I’m friends with my family, too, btw. “Friendship” is a big umbrella.)

Here’s the thing about extraordinary people. They are not always easy. Sometimes they are. Sometimes extraordinary and laid back go together. More often they don’t. But I love people who keep their sharp edges, who retain their quirks and their oddness. People who have such a strong sense of self that they don’t let this world dull them. They keep their shape, despite all the hard times they go through, because Lord knows – we all suffer. We all go through hard times.

Not all of my friends think as highly of themselves as they should. Here’s the thing on that – I am right and they are wrong. I am a really, really good talent scout, you guys. When it comes to awesome people, I am always right. So, if you’re a friend of mine, know that you are awesome. Know that you are talented and amazing and capable of anything you set your mind to. Know that I believe in you and that I want you to live a life as big and as beautiful and as glorious as you are. We only get one time around on this little blue globe. So be brave. Be you.

5 thoughts on “An Awesome Talent Scout of Awesomeness”