It started, as everything always does, with Janet Reid.

I read Ben’s blog post, “Five Reasons I Hate Your Protagonist” and was hooked. You gotta love direct, honest and knowledgeable. At the time, I was working on my rough draft of RUTHLESS and knew my antagonist was a hollow shell. I requested a blog post on villains in the comment section. Ben reported back he was working on it.

The next week, Ben posted Five Things About Bad Guys that Make Me Want to Punch their Creators in the Face. I read the title and thought, CLEARLY, THIS IS THE GUY I NEED TO HELP ME. Just as I became bent on the idea of figuring out a way to get advice from Ben LeRoy, an opportunity presented itself with this post. If I donated $250 to a very good cause, namely, funding jaw surgery for the beloved Kate Ogden, I could get a 50 page critique of my manuscript.

Problem was, I didn’t have $250. What I did have were a bunch of Transformers in my attic. It may sound like a trivial thing, selling one’s toys on eBay. It wasn’t. I am a sentimentalist. It hurt. To a stupid degree, actually. But sometimes sacrifices need to be made. I wanted that critique, and it would be mine – oh yes, it would be mine. And so it was. 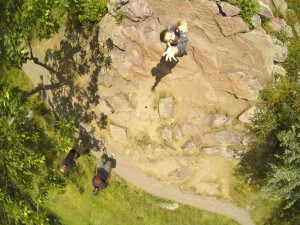 Ben wrote about this story last week. I know I’ve linked the holy heck out of this blog post, but if you open any of the links, that’s the one you should go to. In that story, Ben graciously takes responsibility for the huge lapse in time between my donation and the actual critique. The truth is, that was a two-way street. Just as Ben’s life got busy, I entered the hardcore stretch of Marriage Destruction University. When I surfaced from my trials and tribulations, he was able to give the book a read. During this time, I continued to comment on the Dead Guy blog. At one point, after Ben had been talking about adventures, I was all, “If you ever want to do stand-up comedy, I can show you the ropes because I know all about that stuff, because I’m totally an expert.”

At the end of January 2013, we spoke on the phone and I got some UH-MAY-ZING notes out of the conversation that changed the shape of the novel. At the end of the talk, Ben was like, “Oh hey, so, the stand-up thing, I am going to be in the South April 8th and we should do that! Okay cool, see you then!” To that I said, “Uh-oh.” I’d kinda over exaggerated my stand-up experience, you guys. By a lot. I resolved to do every single open mic available to me prior to April 8th so that by the time Ben arrived, I wouldn’t look like an idiot.

In February, I went to my friend Cody’s birthday party. It was my first time hanging out with comics and it turned into a grand revelation. I HAD FOUND MY PEOPLE AND IT WAS AMAZING. Ben’s trip wound up taking him down state instead of upstate and he missed the open mic. But by that point comedy had become a self-perpetuating machine. Since then, I’ve performed in North Carolina, South Carolina, Georgia, Kentucky, Washington State, and soon enough I’ll start doing some shows in California. I’ve met a ton of awesome comics, even the sort of folks you see on the TV. I do love me some stand-up. The moral of the story? Go ahead and tell white lies, kids – maybe they’ll throw you into hot water and you’ll have to learn how to swim.

When not on stage, I was at home implementing Ben’s notes, as well as another idea sparked by his comments. Those were hard changes to make. It’s like Hemingway says. To paraphrase – Writing is easy. All you have to do is open up a vein and bleed. And bleed I did, my friends. Bleed I did.

Time passed. Here and again I exchanged a message with Ben. A couple of months ago, I decided to embark on a circuitous cross-country trip. I’d never been to Chicago before and then the trip wound up including Madison, WI. As it turned out, just a couple of days after Simon & Schuster bought RUTHLESS, I found myself meeting Ben for the first time. He almost high-fived my hand off when I told him the news. It was pretty cool.

Long story short, there are few individuals I’ve spent so little face-to-face time with who have had more of an impact on my life. From the notes on RUTHLESS that made all the difference to serendipitously inspiring my stand-up comedy, I owe a lot to Ben LeRoy. He’s one of the good ones, you guys.