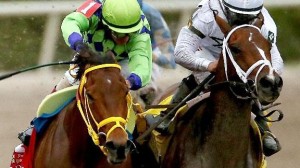 Wildcat Red is in the yellow bridle. He's super serious, super feisty, and super intense. He likes to fight and win. I adore him.

For me, there’s really only one horse in the race – California Chrome. I wrote about him already, at the end of this blog post. I am rooting for him wholeheartedly and he is beyond a doubt the most talented horse in the race.

That said, Art Sherman did that thing that a lot of trainers do and that drives me crazy – he shipped in late. Chrome will not work over the Churchill Downs surface and he won’t get a chance to feel at home for the big race. As it stands, he’s been anxious in the empty paddock and when he gallops down the long stretch, he’s turning his head to look at the empty stands. He’s going to have a lot more to look at when there are 100,000 people in there. So, that’s disappointing. Or maybe Art knows exactly what he’s doing and the colt will win the race by daylight.

Even if he’s prepared the horse perfectly, a million things can go wrong in a 19 horse field. And heck – they’re not in the starting gate yet. Hoppertunity, the second choice, scratched today with a foot bruise. Which is for the best. No horse named Hoppertunity should win the Derby.

Here’s the thing about this Derby. It’s always a hard race to handicap. This time around, it’s an impossible race to handicap. The majority of the field are horses that want to race on or near the lead. This is going to be a jockeys race like none other. So, you might as well throw a dart or pull a number out of a hat, because handicapping this bad boy is nearly pointless. That said, here are some that stand out for me.

CANDY BOY: The forgotten horse. He wasn’t fit enough for the Santa Anita Derby and ran like a short horse. He’s fit now, though, and was shipped in early to Churchill Downs, where he is thriving. Very talented, could jump up and take this. 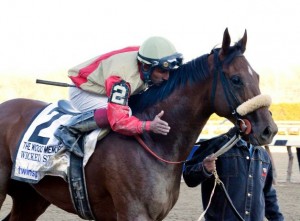 WILDCAT RED: I love this tenacious little fighter! He is bred to sprint and somehow has managed to keep on winning or running a super close second. He has a huge heart to outrun his pedigree. 1 1/4 miles is probably asking way too much, but I’ll be rooting for this underdog!

WICKED STRONG: He looks the part and he’s one of the only horses in the field who comes from out of it. Traffic should go his way. On a sentimental note, I was a big fan very early in his career, so it’s nice to see my belief in him come to fruition. Jimmy Jerkens is a classy trainer and it would be neat to see him win and Rajiv Maragh, his jockey, LOVES this horse. It’s definitely a team you can root for.

DANZA: So this is an interesting prospect. Came out of nowhere to destroy the Arkansas Derby, training lights out in Louisville, looks the part, has a lot of the pieces of the puzzle (breeding, training, etc.) The question is – was his race at Oaklawn a fluke, or is he the real deal? Time will tell. Would not be at all surprised to see him win it.

INTENSE HOLIDAY: I feel obligated to mention him. I’m not into this horse at all, but everybody has been going on about how wonderfully he’s training. So, yeah. The experts say he’s super great. Blah.

MEDAL COUNT: Dale Romans, his trainer, talks as though this horse is an undercover magical unicorn. Romans doesn’t tout horses unless they’re good, and I believe this guy will have a great career, I just think the Derby may be coming at the wrong time and on the wrong surface. (He doesn’t seem to love 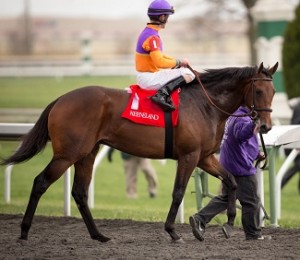 The handsome - and very meaty - Medal Count. He kind of reminds me of a tall Seabiscuit, who was also a meaty horse.

dirt.) He’s an interesting looking fellow, though. A son of the late great Dynaformer, Medal Count is a BIG boy who carries a lot of weight. Not the usual body type for a distance horse, but he’s bred to run to China and back and not take a deep breath.

Ultimately, this is California Chrome’s race to lose and I really struggle to care about the rest of the field. (Except adorable Wildcat Red. I do love that feisty fellow.) I hope Art Sherman’s ship-in-late plan pays dividends. If Chrome fails, it won’t be because he isn’t the best horse in the race. It will be because of a terrible trip (which will either be nobody’s fault or his jockey Victor Espinoza’s fault) or it will be because he becomes anxious and burns all of his energy up before the race. If that happens, the responsibility will fall solely upon his trainer.