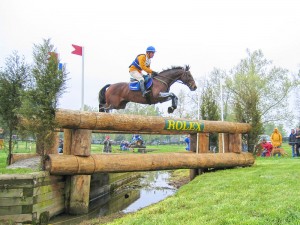 It should also be noted that rational people don't do things like this.

I found myself on Behind the Bit today, and discovered this post. I was reminded of the fact that horse people are crazy, and I decided to share with all y’all my three point theory as to why this is.

1.) Horse people weigh, on average, somewhere between 100 and 200 pounds. And yet when they look upon a four-legged, 1,200 lb. beast, they say to themselves, “I should be in charge of this creature. I should get onto its back and steer it about with nothing but my legs and seat and two flopsy bits of leather. This makes perfect sense to me. If this beast becomes aggressive with me, I will not back down, but instead make the beast back up vigorously, whilst yelling, HEY! or NO! or DON’T YOU DARE! The 1,200 lb beast will respond to this by actually backing down. This also will make perfect sense to me, because I know I should be in charge of this creature.”

2.) Horse people prefer the company of horses to the company of people. This can be quite instructive, if we simply examine the nature of the horse. Horses, unlike cats and especially dogs, are mostly silent creatures. They do not meow or purr or bark or growl. Yes, they do communicate vocally, but their stock in trade is the world of silent gestures, of body language. The pinned ear, the snaking neck, the raised hind hoof, the chewing gesture of a two-year-old. Horse people know this language intuitively. When outsiders say horses aren’t expressive, they can’t believe it. Horses never stop expressing themselves, and horse people never stop listening. Horse people get in trouble not when communicating with their horses, but when they have to open their mouths, speak, and try to communicate with other humans. It tends to not go so well. Horse people are blunt, rude, coarse, frank, assertive, and generally unbearable. It goes beyond a lack of social graces, and really runs into something like Aspergers. Quite possibly all horse people are actually on the autism spectrum, going about undiagnosed and unknowing.

3.) Every single individual horse person knows the way it should be done. Every single individual horse person does it a different way. Barns are collaborative environments. And chaos ensues. This fact actually ties back into points one and two. Horse people believe they should be in charge. They are lone wolves. They have come up with a wide variety of opinions based on personal experience, and like the natural leaders that they are, they know they are right.

Now, of course there are horse people who are gregarious and easy going. But they are the exceptions that prove the rule, and dare I say that the crazier the horse person is, the more horsey they actually are.

2 thoughts on “Why Horse People Are Crazy”