So, today is the day RUTHLESS launches! Yay for Ruth! Go buy a copy! But that’s not what I want to talk about right now.

On Saturday, I watched #UFC 189 with some friends. The entire card was epic, and I don’t use that word lightly. By the time my beloved Conor McGregor walked out to the haunting sounds of Sinead O’Connor singing, “The Foggy Dew” my emotional gaskets were nearly blown. By the time McGregor beat Chad Mendes late in the second round, after a brutalizing ten minutes of fighting, I was overwhelmed. So was Conor. Usually one to beat his chest and declare his supremacy after a fight, instead Conor met his coach on top of the cage and cried, then kneeled on the canvas and cried some more. In his interview with Joe Rogan immediately after the fight, he talked about the crazy mix of emotions leading into the fight and I suddenly realized just how much pressure he’d been under.

This was just for the weigh in, you guys. Not even the fight. The weigh in.

In the words of my friend Mary Quinn, “Ireland doesn’t have a lot going on right now.” The last twenty years have been a roller coaster for Ireland in a lot of ways, and right now, things aren’t great in the island nation. The Irish have latched onto Conor in a big way. 16,000 plus people were in the arena in Las Vegas. 10,000 of them were from Ireland. That’s love and support – it is also pressure and expectation.

More immediate and intense is the pressure Dana White and the UFC have put on Conor to be their avatar and breakout star. They flew Conor around the world twice. He did a monumental amount of press and promotional engagements. They spent more money marketing this fight than any other. All the while, he had to be getting fit and cutting weight, going from his normal 170 to 145 lbs by fight night.

Conor did this for six months. It exhausts me just to think of it. 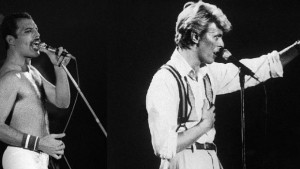 David and Freddie ask us why we can’t just give love one more chance. Sigh. “Under Pressure” is definitely in my top five songs of all time.

And then, two weeks before the fight, the champion Jose Aldo drops out. Conor claimed he had far worse injuries and fought anyway. I don’t doubt him, given the injuries he’s fought with before. At this point, the entire thing hinged upon Conor facing an opponent that he hadn’t prepared for and offered a challenge he had fewer resources to combat.

That is so much pressure. Millions of dollars of promotion, the money and travel plans of his countrymen, not to mention all of the money that could be made for everyone involved. All of it hinged on one man who’d been going at a breakneck pace for six months and who had been on a continuous ride for two years – a ride with little to no real downtime.

No wonder Conor fell to his knees and cried when it was over.

When I was a kid, I hated group sports. Especially group sports that involved balls. I never understood the rules and I had crappy hand-eye coordination. There’s a John Fogerty song, “Centerfield,” with the lyrics, “Put me in coach, I’m ready to play…” That lyric blew my mind. ‘Who’d want baseballs hit TOWARD them?’ I’d wondered. The last thing I wanted was to be put under pressure.

I’ve also thought a lot about freedom and responsibility lately. Specifically, the common desire for freedom – especially the freedom to be truly ourselves – and the corresponding lack of interest in taking responsibility for much of anything. It strikes me that we’ve become a nation of committees, people hiding within herds of other people. It strikes me that there is little reward offered for sticking out our necks, and so we don’t. We want to maximize our freedom and minimize our responsibility whenever possible. This is not a recipe that breeds greatness. Which makes me wonder, do we even aspire to greatness anymore? I don’t see it. Not often.

And this is why people like Conor McGregor capture the imagination. You can say he’s a narcissist and I’m sure you wouldn’t be wrong. (Although the man gives regular and humble thanks to his team.) But narcissist or no, it takes courage to ask for the pressure, to want to the point man, to believe you can live up to millions of dollars worth of expectations. Of course, Conor found himself in that position to begin with because he loves what he does. He has followed his bliss, it has led him here, and he has simply said yes to providence.

For myself, I am no longer the 5th grader who desperately didn’t want the ball thrown my way. I’ve found my own place of embracing pressure. Not nearly in such a dramatic way as Conor McGregor, but let’s just say if Simon & Schuster wants to send me to San Francisco to sell Ruthless to librarians, you better believe I am all about it. To quote another song lyric, “I’m a put on a show kind of girl.” (Britney, Circus.)