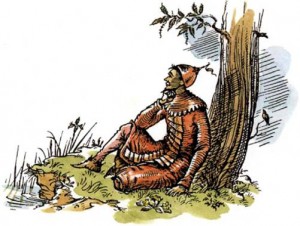 An illustration of Emeth from The Last Battle.

So, here’s a thing about me some of you might not know. My worldview is about 85% based off The Chronicles of Narnia. An additional 5 to 7% is taken from C.S. Lewis’s nonfiction works, such as Mere Christianity. The remainder of my worldview coming from Mel Brooks movies, W.C. Fields sketches, and combat sports. But most of the strands floatin’ around in the ol’ Duder’s head are pure C.S. Lewis. Here are two things the man wrote that really stuck with me, but I didn’t figure out why until today.

The first comes from the book The Last Battle. If you haven’t read the Chronicles of Narnia, you really should. Preferably, you should go back in time to when your brain was extra bendy and could absorb the stories without preconception, but even without the time machine you should still read them. In the stories, Narnia is a very English sort of country, small but fierce. Narnia is bordered by Archenland, and in turn Archenland is bordered by the vast and powerful Calormene Empire, which was C.S. Lewis’ way of saying, “The Ottoman Empire.” The Calormene religion worships a God named Tash, who is a ruthless and bloodthirsty God. In The Last Battle, there is a noble Calormene soldier named Emeth who comes face-to-face with Aslan, the Christ figure at the center of the Chronicles of Narnia. Emeth is amazed that Aslan tolerates him, but Aslan more than tolerates Emeth. He loves him, for he is a good man. Emeth honestly tells Aslan he has never worshipped him, he worshipped Tash. Aslan replies that he and Tash, “are of such different kinds that no service which is vile can be done to me, and none which is not vile can be done to him.”

C.S. Lewis expresses a similar sentiment in Mere Christianity. He states that if a young man who has been experiencing doubts about his faith becomes brave enough to honestly declare these doubts and leaves the church, “he will have been no closer to Christ than at that moment.” That’s from memory and may not be exact, but it’s close.

Reading the story of Emeth as a child (and a good twenty times more over the years) and reading that passage in Mere Christianity as an adult, deeply resonated with my own understanding of what is important and true. Today, it occurred to me that both express the idea that what is of greatest consequence is the thing itself.

I am a Catholic and make no apologies for it. I am a believer. But part of what I believe is that Christ taught us to eradicate fear, be honest, to love one another. Emeth was brave, forthright, and good, and so Aslan loved him. Emeth was raised in a world that taught him Aslan was a monster. Aslan understood this and did not hold Emeth culpable. So, I believe, it is with God the Father. Here’s a massive spoiler, so skip the next sentence if you’re actually going to read The Last Battle. This conversation that C.S. Lewis created is all the more poignant because it occurs after Emeth’s death. He is in heaven when he speaks to Aslan.

I have long felt it easier to talk to agnostics and atheists about spiritual matters than Christians. There are multiple reasons for this, most of them dealing with the burden of language. When speaking with someone who stands at a 180 degrees from myself theologically, we arrive at the conversation with no terms in common. We cut straight to discussing the thing itself. Now, the thing itself might very well be the nature of the Eucharist or the divine nature of Christ, but just as likely it is a discussion of how one should live in the world. Linguistically, however, we are free to communicate as effectively as possible. These conversations are also easy because agreement comes as a happy surprise. Disagreement on some matters is a foregone conclusion. Although it has happened that I’ve been treated with disrespect by an atheist or agnostic, generally speaking I find myself in conversation with good people who I respect. (In large part because I don’t waste my time on jerks.)

When it comes to Christians, I find conversations about faith can be fraught with problems. Firstly, we don’t skip to straight to the thing itself. Our lexicons are too loaded. We have language to describe the thing itself, so we use that language. But it is as if we’re all speaking various dialects. Too frequently, our conversation becomes centered not upon the thing itself, but semantics. Our discussion becomes a discussion of discussion. There are two things at the root of this discord. Charitably speaking, there is a deep and profound belief about what is the truth. So, there’s a passion behind the viewpoint, given the importance of the subject matter. Far less charitably speaking, there is a very human desire to be right. There is no humility in this desire and it is toxic. Moreover, the conversation is charged to begin with, because there is the expectation of agreement. Instead of the happy surprise discovered with someone from a differing viewpoint, there is the unhappy surprise of disagreement where there should be accord.

These conversations bummed me out.

So much so, I just stopped having them. But here’s the thing. There are people you can talk to and people you can’t, and then there’s my dad. My father is extraordinarily passionate about his faith. All of that passion makes theological conversations with him highly charged. It is my nature to skip out on highly charged, but he’s my dad, so I hang in there and sometimes we hash it out. I learn a lot from my father. He’s the most well educated person I know when it comes to faith. And once upon a time, I changed his mind about something important. Point being – it’s worth it to have these conversations. They’re important.

Right now, I am forcibly reminded of something Thich Nhat Hanh wrote: The Buddha says, “I must state clearly that my teaching is a method to experience reality and not reality itself, just as a finger pointing at the moon is not the moon itself. A thinking person makes use of the finger to see the moon. A person who only looks at the finger and mistakes it for the moon will never see the real moon.”

You may be thinking to yourself, did she just use Buddha to defend her beliefs when she’s been talking about being a Catholic? Answer, yes. Yes, I did. It’s too perfect not to use, because my criticism of my fellow Christians boils down to the idea that sometimes we are too caught up looking at the finger and not at the moon. But you know, at least I’m not calling them out as lazy cowards, which is essentially what I’ve labeled myself in this blog post, so they’ve got that going for them, which is nice.

At some point in the future, I’m going to write an exciting blog post about relativism, absolutism, certainty and doubt. It’s gonna be HOT. So watch out for that, kids!

One thought on “The Thing Itself”