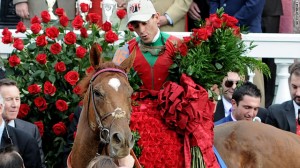 Yesterday, I wrote the following sentence here on this blog: I am always looking for the karma angle, and I have to wonder if this last minute switch from Robbie to Johnny isn’t a weird, cosmic shift to make an Animal Kingdom win more palatable. 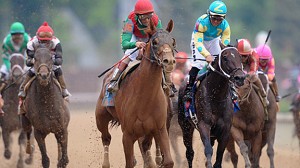 I love this photo of Animal Kingdom winning the Derby. Please note that he is the only horse with his ears pricked. People think horses are dumb, and do not know where the finish line is, do not know if they've won. They absolutely know where it is and whether or not they've won.

But I loved the horse’s looks (how could you not?) and I love, love, love the horse’s trainer. I previously went on and on about the glories of Graham Motion when discussing his training of Toby’s Corner. The same applies here. Motion’s horses are treated like horses. Fair Hill in Maryland is my favorite thoroughbred training facility in the United States. The horses live the good life there, in every possible way. I am also incredibly happy for Team Valor, who went all in with Graham Motion, putting all of their horses with him, and building a state of the art barn for him to use at Fair Hill. You’ve got to love it when someone is rewarded for doing right by the horse.

All that said, I’d dismissed Animal Kingdom early on, thanks to the four starts, the six weeks, and the lack of dirt experience. Because of that, I didn’t look more closely at the horse until the last minute switch to Johnny V. That’s when my antennae went up, because I sensed the Derby Gods in motion. I looked at some photos of Animal Kingdom, and remembered how handsome I’d found him to be. But even then, I didn’t stop and think the following thought: “Hey, this horse LOOKS like a dirt horse.” 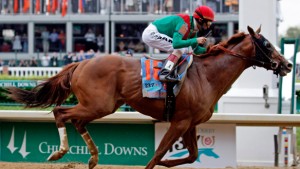 Check out the definition of his serratus muscle. This is a horse with size and power. This is a dirt horse.

Because he does. He totally, totally looks like a dirt horse. He carries a lot of size, and with that size comes strength and power. At the same time, his classy turf pedigree gives him incredible stamina. It might just be that we’ve found a very special crossover hit, here. I am reminded of Cigar, another great horse bred for the grass who didn’t find his best stride until they tried him on dirt. Or even Secretariat, a horse bred to excel at a something less than a classic distance, who found his best moment at a mile and a half. Horses that transcend their breeding don’t come along very often, but when they do, they are often our most special racehorses. Whether Animal Kingdom will follow in these illustrious hoofsteps we’ll just have to see.

Patrick V. did take care of Comma, who raced close to the pace until in deep stretch. When it became evident Comma was done, Patrick wrapped up on him and he wound up crossing the wire last. Once back at the barn, they discovered an ankle injury. It does not appear to be serious.

Archarcharch had a horrible trip, complete with slipping saddle and a leg injury incurred while Jon Court pulled him up. A very bad, no good Derby for Archarcharch. We’ll have to wait and see whether or not the injury is career ending.

The Todd turned comedian, making not one, but two jokes at Mike Repole’s expense. Completely shocking, in a good way. The Todd even smiled. Possibly in a, “Ha ha ha, this guy is driving me crazy, I don’t care if I make him angry, maybe then he’ll leave, ha ha ha,” sort of a way.

The Todd was also extremely gracious after the race, giving Johnny V a high five with so much enthusiasm you would have thought The Todd trained Animal Kingdom. It was almost enough to make me forget the owners of Sway Away, watching at home, sad and old.

Animal Kingdom looked great this morning. I watched a video of him walking the shedrow, and he looked relaxed and supple. No evidence of exhaustion or stiffness. The plan is to go on to the Preakness. Also heading to Baltimore is Much Macho Man, who was a very good third for Kathy Ritvo. Apparently he, too, came out of the Derby well. Dialed In, the favorite who placed a non-threatening 8th, is thinking of going as well.

As the crab cakes get closer I’ll post further updates. Fingers crossed Animal Kingdom can get it done in Maryland. He definitely won in the right way in Louisville – strong, steady, and with something left in reserve.

Under the Twin Spires...and winning by a good margin, too.