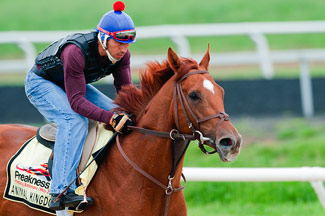 Animal Kingdom at Fair Hill, training for the Preakness.

Usually there is a lot of buzz exiting the Kentucky Derby, with speculation about the possibility of a Triple Crown. This year, not so much. Particularly amongst my horse friends, most of whom are very disappointed in this year’s Kentucky Derby. If you ask them why, they say, “Well, we won’t have a Triple Crown winner this year.” And if you ask them why they think that, they say, “Because when a horse is going to be great, you know it coming into the Derby.”

This is poppycock. Now, there is some truth to the idea that a Horse for the Ages usually is recognized as such relatively early in his/her career. But with our most recent Triple Crown winners being Affirmed, Seattle Slew, and Secretariat, we have forgotten that not every Triple Crown winner is a legend from the get go. (Horses for the Ages being somewhat rarer than Triple Crown Winners.) 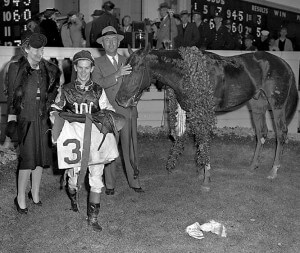 Omaha was a son of Gallant Fox, an extremely popular Triple Crown winner. Omaha carried with him his sire’s mystique, which is probably why he was second choice in the betting at the Derby. He’d won only once as a two-year-old, with a whole bunch of runner-up finishes as a three-year-old. He was also a physically impressive horse, standing seventeen hands high, which no doubt encouraged the bettors. (For non-horse people, this translates to 5’6″ at the shoulder.) Omaha proceeded to win the Derby, the Preakness, lose the Withers, and then win the Belmont. So he won the 1935 Triple Crown, albeit with a loss thrown into that series of races.

Assault, who won the Triple Crown in 1946, took four tries to break his maiden, finishing his two-year-old year with two wins out of nine races. On Derby day, he was fourth choice in the betting, and won in slow time. The Preakness was the first race wherein Assault found himself the favorite. He won the Preakness, but not impressively, and it was Lord Boswell who was made the favorite for the Belmont. That race, however, proved to be one of Assault’s best, and he was a decisive winner of the final jewel of the Triple Crown. Assault was a plain, small chestnut with one deformed hoof, and maybe this fed into the general lack of respect for him. But over a 42 race career, he proved he was no fluke, winning 18 times and placing 13 times.

Sir Barton, who won the crown in 1919, had never even won a race when he entered the Derby. The only reason he was in the race at all was to act as a rabbit for his stablemate, Billy Kelly. (For non-horse people, a rabbit is a horse who sets a hot pace, knowing the pace will wear him down and leave him unable to win. However, the hot pace ensures a good set-up for a closing stablemate.) Apparently, nobody told Sir Barton he wasn’t supposed to win. He went on a streak, and by the time he won the Belmont in American record time, he no longer played second fiddle to Billy Kelly. 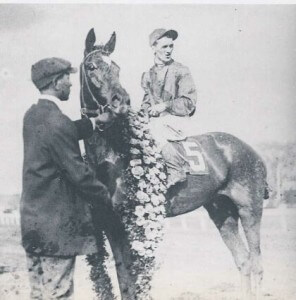 The "billy goat" Exterminator wears the blanket of roses.

Finally, I want to mention a horse who is not a Triple Crown winner, but is relevant for another reason. One of the many records or streaks broken by Animal Kingdom in his Kentucky Derby win was this one – “No horse since Exterminator in 1918 has won the Derby off of four starts.” At 30-1, Exterminator was a far longer shot than Animal Kingdom when he won the Derby. In fact, he wasn’t going to be started at all, but then his star stablemate, Sun Briar, turned up lame. Exterminator had been purchased not as a racehorse, but as a workmate for Sun Briar. When the trainer suggested they enter Exterminator instead, the owner of both horses was appalled that an unattractive nag like Exterminator would carry his colors. He actually called Exterminator “the billy goat.” But the trainer was persistent, and ultimately the horse was entered.

After his surprise Derby win, Exterminator did not go on to win the Triple Crown. But he did go on to win 50 out of 100 races and become a living legend, beloved by legions of fans.

My point is, the paths to greatness are many and varied. Over the 33 years since Affirmed won the Kentucky Derby, racing fans and the general public have become increasingly locked into what I’d call Secretariat Syndrome. We want a horse to come along and defy reality. I don’t know if Animal Kingdom will win the Triple Crown, but I can give you one guarantee – there will never be another Secretariat.

But there might be a magical story unique to Graham Motion’s bright chestnut colt with the perfect star on his forehead, and I can tell you this – he’s better than a lot of people think. He covered the last half mile of the Derby in 47 seconds. Only one horse has ever closed faster – and that horse was Secretariat.