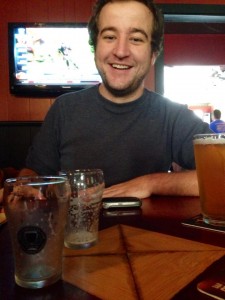 My favorite picture of Cody. We took a spur of the moment road trip to Milwaukee. Found a burger place that offered "samples" of beer that were nearly full glasses. It was a great place.

Two years ago, I found myself driving up to Greenville, South Carolina with one Alrinthea Faye Carter. For some reason I no longer remember, I’d stopped by Darren Linvill’s house prior to the drive up. He took one look at me and said, “Why do you look nice?” This is the benefit of best friends. We needn’t beat around the bush. His wife, Claiborne, was rather mortified and tried to say something to smooth over the moment, but I said, “No, he’s right. I do look nice and yes, it’s weird. I am going to a party in Greenville. A comedian party.” I’m not positive, but this may have led into Darren’s earliest threat/warning about the pending demise of our friendship.

In the car with Al, we debated what the party was going to be like. We considered ourselves queens of Clemson, to be sure, but the big fancy city of Greenville? That was a whole ‘nother thing. (Subsequently, Al moved to Greenville and took over the city by force after a massive charm offensive. It was truly a blitzkrieg of charm, you guys.) Michael Robinette was the host of the shindig and I was brand spanking new to comedy. I’d been getting onstage for only a month and was frankly surprised I was invited. Memories of schoolyard bullies firmly intact, I thought there was a good chance the boys would be mean to the new kid and I’d leave early.

But that’s not what happened. Instead, I met awesome people like Amanda Holcombe and Nick Murphy, Andy Cummins and Art Sturtevant. We all talked and laughed and so many of the people there spoke my language. It was crazy. I’d met other mes. I thought I was the only me, but that wasn’t so, there were lots of mes. They didn’t look like me, but they were mes. To be sure, they were mes. At a certain point in the evening, Cody was pressed into speaking. He recited a typical host introduction. “Tonight, we’re pleased to have at the Coffee Underground theater a wonderful comic, put your hands together for Cody Hughes.” It was weird and strangely hilarious, which sort of sums up Cody.

Later, around a campfire, somehow the fact I love horse racing came up and I bragged about my extensive trivia knowledge on the subject. Nick Murphy popped up with, “What’s the story of the 1979 Belmont?” Which, of course, happened to be one of the most dramatic Belmonts in history, with Ronnie Franklin – or a safety pin! – sabotaging the great Spectacular Bid, allowing underdog Coastal to grab the victory. Halfway through the story, I realized I was talking about horse racing and I needed to shut up, so I shut up. Somebody said, “No, finish, I want to know what happened.” And there was a sudden feeling of – I am around friends. I have found my tribe. It took 36 years, but better late than never.

I remember on the drive home, Al said, “That was kind of weird. Instead of talking, people just sort of stood in circles and did bits at one another, hoping for laughs.” I was like, “AND IT WAS THE BEST THING EVER!” I’d so much rather stand around in a circle and try to find the funny than, you know, communicate. Communication can be a bummer, man. Comedy – never a bummer. Opposite of a bummer, in fact. I exaggerate, of course. Communication has its place. But so does comedy. And comedians put it where it belongs – front and center.

To be honest, I am not wholly a comedian. I am not fully a member of the tribe. If I was, I would never have written screenplays and novels to begin with. There are true, 100% stand-up comics out there, Cody Hughes being one of them, and they are a breed apart. But I have a deep love and appreciation for them, and they are very nearly mes. Even closer are comics like Fray Forde, who are creative jack-of-all-trades. Fray Forde can write the hell out of a short film, let me tell you what, and kill it on stage.

And so, Cody Hughes birthday means a lot to Cody, his mother, his father, his sister, possibly extended family members, and close friends, of whom I believe Cody has as many as three, but outside those people I doubt there’s anyone who celebrates Cody’s birthday as much as I do. Another comic, Elizabeth Brooks, recently posted on Facebook that she’d been doing comedy for one year. A non-comic (or as comedian Becca Steinhoff would call him, a “muggle”) questioned Brooks, asking why comics pay such close attention to their comedy anniversaries. I don’t know how Elizabeth replied to his comment, but for me, the last Monday in January, and just as importantly, Cody Hughes’ birthday, are markers of the beginning of a new life. When you wander through the wardrobe door and find Narnia, it’s a date worthy of note.