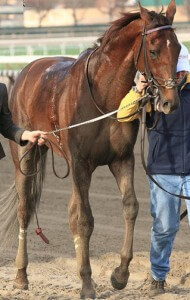 Every year, I do a Kentucky Derby promo here at Fanfreakingtastic, once all the prep races are run, and the Derby picture clears. Usually, I feature several horses of interest. This year is different. This year, I have one big, giant, huge, sentimental favorite for the first time since Smarty Jones won in 2004.

His name is Toby’s Corner. Here is the story of how I fell in love with him.

It was early February, cold and dreary, when I found the name Toby’s Corner in the entries for the Whirlaway Stakes at Aqueduct. I laughed out loud and sent an email to my mother-in-law, telling her I’d found her Derby horse. My mother-in-law has a cat named Toby. I have written about him, and his struggle with demonic possession, here.

Encouraged by what I read in his past performances (he was riding a two race win streak), I was eager to see what Toby’s Corner looked like. Once I saw him, I fell for him. He was long, leggy and lithe, just the way a racehorse should be. He was well put together, but very upright for a thoroughbred, and also a little unusual in some of his other angles. Toby’s Corner is a classically beautiful horse, but different enough to be interesting. I was a smitten kitten.

And then I watched the Whirlaway. (You can see it here, although you need to scroll through all the prep races to reach it.) I was extremely impressed with his win. He made a brilliant move on the turn for home, and then started to gawk at the stands. His jockey, Eddie Castro, tactfully suggested Toby look where he was going, and once he straightened out he opened up on the field, with a beautifully long, sweeping stride. Galloping out, he had his ears pricked, a sign of a happy horse who likes his job.

All atwitter, I tried to find out all about my new love. I read interviews with his owner, Dianne Cotter, who also bred and raised Toby. I learned that he is trained by my beloved Graham Motion, an Englishman who treats racehorses like horses, training out of the Maryland facility Fair Hill. (Fellow horse people – the racehorses there get TURN OUT. Non horse people, turn out means they get time to be loose in a pasture and hang out like a regular horse. Most racehorses spend 23 hours a day in a stall.) I googled his name, and learned that Toby’s Corner is the oldest house in New Orleans’ Garden District. I love New Orleans, and chalked it up as one more reason to love Toby. I also told a lot of people about the meaning of his name.

The Gotham Stakes, Toby’s next prep, fell on my dad’s birthday. I informed the family that we would be taking a time out from the celebration to watch Toby. He finished third that day, but I wasn’t overly disappointed. He was due to bounce coming out of his huge effort in the Whirlaway. Better to bounce now, than later.

My sister Becky and my niece Courtney were there, watching Toby with me. Courtney is an eventer, and trains with a competitor named Hillary Irwin. I hear a lot about Hillary. I’ve never met her, but I feel as though I have, given the number of Hillary stories I have heard. I knew she evented ex-racehorses she got from her grandmother, who bred them, I knew she has a deep loyalty and love for her horses, I knew she was a wonderful mentor to Courtney and gave her excellent advice.

Next up – the Wood Memorial, where my Toby was set to do battle with Uncle Mo, the golden boy of the class of 2011. Undefeated, Uncle Mo was the champion 2 yo colt of 2010, and as I watched the coverage of the race on TVG I felt my blood pressure rise. The commentators were touting Uncle Mo as though he were the next coming of Secretariat, and made no mention of Toby at all.

I couldn’t understand it. Didn’t these people see what I saw in the Whirlaway? Didn’t they know that Toby was built to go a distance? Didn’t they see Uncle Mo’s short, bulky muscles, designed for mile long races? Didn’t they realize that his trainer, Todd Pletcher, had wrapped the horse up in bubble wrap? Giving him one joke of a race to prep for the Wood? To me, the entire thing reeked of injustice. As Toby loaded into the gate, I prayed, “Please God, please let Toby make all these people eat their words. All these rude, rude, rude, incredibly stupid people, please force them to see what I see.”

And this is what happened.

Now, I love Tom Durkin, the race caller, but he, along with everyone else, forgot Toby was in the race. He is number 2, and is along the rail, in the back. His jockey wears a bright red cap and forest green and red silks. Turning for home, Toby is last, and still on the rail. You can then watch that red cap weave through traffic until Toby bursts into first place, sticking that long, lean, liver chestnut neck out in front of Uncle Mo.

And there was much rejoicing.

After the race, I eagerly awaited the recaps from the experts. I knew they’d come along with their tail between their legs, forced to acknowledge Toby’s excellence. But no! All the stories were about Uncle Mo’s loss, not Toby’s victory. More injustice, more gnashing of teeth.

On the plus side, there were some human interest stories about Dianne Cotter, Toby’s owner. I learned I was wrong about his name. Dianne purchased a pony named Toby for her granddaughter many, many years ago, and the pony had the corner stall. They called it Toby’s Corner. The name was sentimental and nostalgic, and it made me like Dianne Cotter all the more. I also learned that she only bred about two foals a year, and had bred Toby’s sire, Bellamy Road, who also won the Wood Memorial. To have bred two Wood winners from such a small operation is truly a feat. This win was even sweeter than Bellamy’s, however, as Dianne still owned Toby at the time of his win. (As a side note – Bellamy Road is Toby’s sire.)

I called my sister, Becky, to tell her of the glories of Toby’s win, the injustices surrounding him and all the neat things I’d learned about his connections. Before I could get anywhere with my story, she said, “Oh, yeah, that’s Hillary Irwin’s grandmother’s horse.” 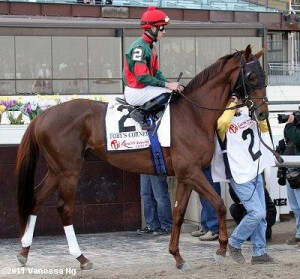 This is what a thoroughbred is supposed to look like.

“Yeah, Hillary Irwin. She’s the one who owned Toby the pony when she was a little girl.”

Becky said, “Yeah, you know. She gets her thoroughbreds from her grandmother, that Hillary, well, her grandmother is Dianne Cotter. Hillary’s mom, Carrie, is my good friend.”

And my brain exploded with joy, and I wrote the biggest 12 year old fan girl letter to Carrie Cotter Irwin on Facebook, telling her all about how I am Toby’s BIGGEST FAN IN THE WORLD!

The kind woman wrote back, told me that they are all over the moon about it, about how Toby’s Wood was the greatest day of their lives. She was gracious and lovely, and said not a thing about the nasty TVG commentators, or Tom Durkin’s call of the race. She was simply filled with gratitude that her mother is getting to see her dreams come true.

3 thoughts on “Squarely in Toby’s Corner”