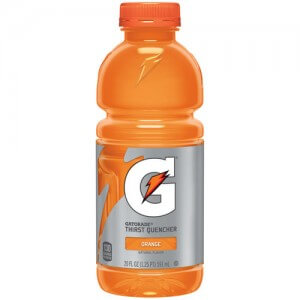 As it so happens, orange Gatorade is my favorite Gatorade.

Just now, I was driving along in Seneca, South Carolina. I stopped for a red light, a UPS truck ahead of me. The sun was on its way down — the sunlight stuck halfway between summer and fall. My very favorite sort of sunlight, as it so happens.

A beautifully landscaped island was next to the road. Standing in the middle of it were two Hispanic men with lawn care equipment. It has been a hot day in the South and their clothes were soaked through with sweat. The light turned green, but the UPS driver didn’t go anywhere. For once, I was feeling patient and waited, content in the idea that at some point, the UPS truck would move along. In the meantime, I’d take in the sunset and the flowering crepe myrtle trees and green grass.

Then I noticed the Hispanic men were speaking with the UPS driver. My first thought was the driver was having a problem with his truck. Then the two men walked over to it, smiling. I watched as the driver handed them two giant orange Gatorades. The bottles were dripping water, giving the impression they were fresh and icy cold from the cooler.

The UPS driver made it through the light, but I didn’t. The men were so happy with both the gesture and with the Gatorade. I was so happy for them. They noticed me smiling and they raised their drinks to me in a sort of toast. I nodded in return, the light turned green, and I went on my way, better for having been a witness to that small moment of human connection.

It made me realize, too, that it has been awhile since I’ve been the UPS driver in that equation. Don’t get me wrong – I’ve done nice things for people, I’ve given to charity, I’ve tried to be there for friends going through hard times. (Don’t know how great of a job I’ve done with any of that). But it takes something else to make moments like that happen. It is not something born of effort, but is rather a natural external expression of an internal reality. It takes a largeness of spirit to create spontaneous moments of human connection. I don’t have that right now. I have in the past, but not right now. Which is, as The Dude would say, “A bummer, man.” But such is life. It ebbs and flows.

I’m grateful to have seen the gifting of the Gatorade, though. It was good to be reminded of what that looks like.

2 thoughts on “Something Good”