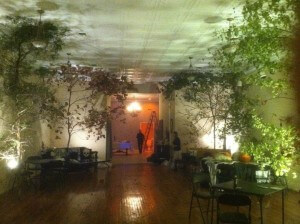 This is from the day before the party, but I've always liked this picture. Imagine lots of people and more decor and you'll get a sense of the Halloween Party at its apex.

I moved to South Carolina full time in 2003. That first year was rough in a lot of ways. After eight years in Los Angeles, Clemson was major culture shock. (Movie theaters were not cutting it, my friends.) Initially, all my friends were my husband’s friends, meaning all my friends were guy friends. There were a couple of notable exceptions, but generally speaking, I lived within a sort of gender isolation.

In 2005, I started working at the Cliffs. A few months after I started, Mary Tannery came to work as an event planner. I was like, “You seem like a very shiny object and I’d like to put you in my nest.” On the surface, Mary and I couldn’t be more different. I worked with horses and wore jeans and boots and filth and frequently no make-up. Mary wore heels and A-line skirts and her hair pulled back in a sleek bun. But if you scratched the surface, you’d quickly see that Mary and Carrie were two peas in a pod.

Mary and I have a lot in a common. We are fierce and fiercely loyal, intensely independent, tough, love to laugh, and live by the motto that if a little is good, a lot has got to be great. (See: hearts, Valentine’s Day 80’s Prom Party.) Neither of us are keen to suffer fools and we like to get things done, always believing we can will our vision into existence. (See: forest inside a room, Halloween Party.)

When I first met Mary, I carried with me the scars of a lot of female friendships gone awry. I could make friends quickly and easily with men, but with women, I always had my guard up, waiting for the backstabbing to begin. It took time, but slowly I realized that not only was Mary dynamic and awesome and charismatic and fun, but she was also supremely reliable. Mary has always been there for me, whenever I needed her. Often driving to my place in 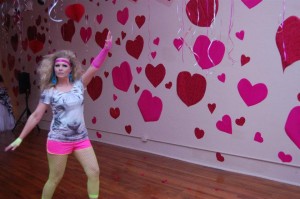 I mean, what. How much of a superstar is this girl?

Pendleton, even though she had more going on than I did. But it was as if she sensed when I needed a visit from a friend, and would take the time to materialize at my doorstep, just when I needed her to say, “How’re you doing?”. It’s not often that someone so sparkly is also so rock solid. She is a rare and wonderful creature.

The Cliffs was a rough place for me to work. Very rough. Every step of the way, Mary was there for me. I came to see it as my Vietnam, and Mary was my blood brother. Not that we didn’t have a lot of fun on the job, too. We put together AMAZING parties. Once, for Halloween, we constructed a mad scientist haunted house and Mary had ordered a lab coat. She’d thought it was a plain white lab coat, and happened to open the package at a meeting. It was one of those boring, stiff, corporate sort of meetings, and Mary was talking about the haunted house, opening the package, saying she was going to get a name tag for the coat, then said, “Oh! Look! It already has a name tag stitched in! It says Dr. Seymour Bush, OB/GYN.”

It hit everybody in the room a split second before it hit Mary. It was a magic moment, you guys.

Also magic, the Halloween prior, when Mary and I first bonded, cutting out hundreds of vinyl bats with my good ol’ boy boss. This was well into the night – we were working extra hours for party prep. Mary and I were chattering away like two 13 year old girls at a slumber party. I asked her what her birthday was, she told me, and I said, “Oooo! You’re an Aquarius! Like my horse!” My good ol’ boss briefly contemplated suicide in that moment. He didn’t say anything. I just saw it flicker across his eyes, like, “I could jump out that window right now and end all of this.”

Eventually, we both left the Cliffs, but we continued throwing parties together. Before I met Mary, I loved to throw a good party, but Mary gave me a new sense of scale. For Halloween slash my birthday, an entire forest was brought inside her empty retail space. It was glorious. For Valentine’s Day slash Mary’s birthday, we decided to do a Valentine’s Day 80’s Prom theme, which isn’t actually a thing, except we decided it was. We cut out paper hearts and attached them to the walls, we had 3D hearts we hung from the ceiling. I can’t remember the number of hearts we hung up, but it was, no joke, like thousands. It was midnight and we just kept saying, “I think it needs some more over here.”

Although our friendship has been marked by a whole heck of a lot fun, there’s been darkness, too. Mary, more than perhaps anybody, was my confidante as my marriage was falling apart. One day, I stood in her store, feeling absolutely bereft of hope, and Mary said to me, with steel in her eyes, “It is going to be okay.” And I explained to her no, I thought perhaps it wouldn’t be okay, perhaps it would end in divorce. The steel didn’t go away. Instead, she replied, “I know exactly what you’re saying. And I am telling you it’s going to be okay. You will be okay.” There was no compromise in her. I would be okay. She wasn’t giving me any other options. It took another several months before the thing actually broke apart, but during that time I thought back to Mary’s words. It took awhile, but they became a foundation upon which I built a new sort of strength. 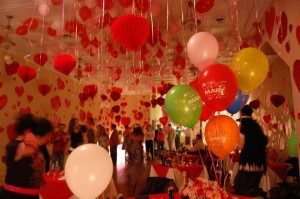 Do you understand how many hearts happened here? Also, personalized birthday balloons.

Not too long after our last party, Mary became pregnant with her twin boys, Calhoun and Lachlan. It was time for us to hang up our party spurs for awhile, but even with twins (and later, pregnant with her third, Owen) Mary never stopped caring about my nonsense. When we’d hang out, she’d ask about comedy and my family and writing. I’d say, “Let’s talk about your boys!” And she’d say, “That’s all I ever do. I want to hear about you.”

As I anticipated, Mary is an awesome mom, the kind of mom I’d want to be if I ever was one. Her boys are a little wild, but they’re good as gold. They’re free to be kids and find their limits. They get both soft love and a little tough love if it’s needed. She strikes a balance between all of these things, which is so hard to do – especially with three boys under two!

Along the way, however, not everything went as planned. Mary, her husband Jason, and her family learned that Lachlan has JMML, a rare form of leukemia. Although there had been questions and concerns for some time, the diagnosis only came in two weeks ago. Since then, it has been appointments and drives to Charleston and friends rallying and Team Tannery coming together to do everything we can to help Lachlan and those who love him.

During those two weeks, Mary hasn’t stopped asking me, “How’re you doing?”

One of the very first things I learned about Mary when we met was that she was in love with Matthew McConaughey. Like, for real, you guys. It’s a love affair. As with everything, Mary has been steadfast in her devotion. I don’t know how far back the thing goes, but I know it goes way, way back. She stuck with him through thick and thin, during the lean years when the roles weren’t so great, and into the new glory years of Oscar gold. 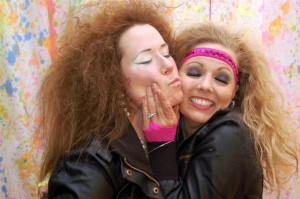 The next few months are going to be hard. Lachlan is going to be at MUSC in Charleston, undergoing first chemotherapy and then a bone marrow transplant. Team Tannery will be in effect throughout, doing whatever we can to support and help Mary and Jason as they support and help Lachlan. Early on in my friendship with Mary, I took to saying, “I love my Mary!” (Usually expressed at something close to a yell.) Mary would call back, “And I love my Carrie!” (Our names rhyme, you guys, it’s pretty cool.) And it’s true. I do love my Mary, and just as she once told me everything was going to be okay, to her I say, it’s gonna be alright, alright, alright.

P.S. I think it’s important to note Mary was in roller skates in the photo of her in the white tiger t-shirt. Unfortunately, the skates wound up outside the frame.

2 thoughts on “I Love My Mary”