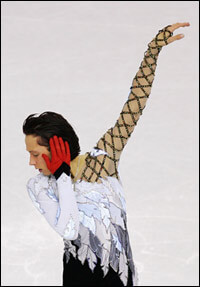 The understated elegance that is Johnny Weir.

If I may begin with the adorable figure skating pair from China. Zhao and Shen’s epic tale of hard work, loyalty, and passion for their sport reminds us that these traits are universally lauded, that no one country can claim jurisdiction over integrity and love. These beautiful qualities belong to us all. Which sucks. Remember when Katarina Witt chilled us to our very bones with her dark East German beauty? When she went toe to toe with our little Americans, scrappy, tough, running on instinct and heart alone. Not privy to the Communist war machine of an athletics program that East Germany boasted, they were instant underdogs. And sure, maybe the word on the street was that Rosalynn Sumners was a brat (that piece of 1984 gossip delivered hot and fresh from the Auburn, WA rumor mill) and yeah, that Debi Thomas was a punk, and, yes, in later interviews Katarina Witt did come off as a delightful human being, BUT – the point is – SHE WAS THE BAD GUY AND YOU WERE SUPPOSED TO ROOT AGAINST HER!* 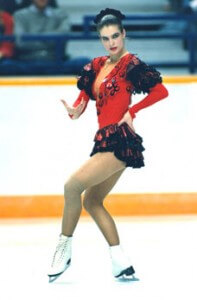 Watch out Poland. She's coming for you.

My further point is this – the Olympics were more fun carved into Cold War blocs. Our Americans weren’t just trying to complete a triple toe loop, they were completing a triple toe loop FOR FREEDOM. These days, it feels like they’re doing a triple toe loop for the sake of a triple toe loop. Which is fine, I guess. But I’m not going to get all cappy about it. Meanwhile, NBC programming is forcing me to get all mushy over a couple of Red Chinese exemplifying all that is best in both humanity and sport. At least they beat the Russians.

In other American Olympics news, what in the H. E. double hockey sticks (See what I did there? Hockey sticks? Winter Olympics?) are our snowboard cross riders wearing? JEANS? REALLY? FREAKING BLUE JEANS? Each with identical patterns of faux holes and faux wear and tear? Now THIS makes me get all CAPPY. Note that every other nation has the decency to put their snowboarders in that, you know, snow time material. (Whatever. I live in the South. I don’t know what it’s called.) Snow time material (which our mogul snowboarders wear) has the decency of offering color saturation and professional sheen. Is that so much to ask for at the Olympics? We Americans might like to think of ourselves as scrappy, but must we be so literal about it? Oh America, it is moments like this that make me think you’ve jumped the shark. 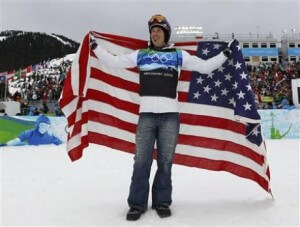 *Just because you were supposed to root against Katarina Witt did not mean that I did. In one of my many clashes with Mrs. Stanley, First Grade Teacher, she shared with the class a newspaper clipping of Rosalynn Sumners. I had heard that Rosalynn had been mean to a friend of my sister’s, and so I did not like her. Not at all. Mrs. Stanley informed us we should root for her because she was the hometown girl. This, to me, felt like propaganda. Not only was I being told how to think, I didn’t agree with the message. I raised my hand and told Mrs. Stanley I would not be rooting for Rosalynn Sumners in her epic showdown on ice with the East German juggernaut. Judging by Mrs. Stanley’s reaction to this news it’s possible she reported me to the CIA as a likely participant in UnAmerican Activities.