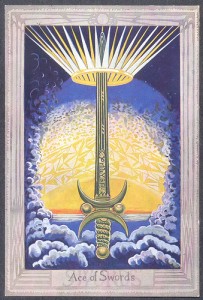 This is what I stole from Ana-Lisa. Sorry, Ana.

Telling fortunes is a tricky business.

I grew up in a fortune telling sort of house. My mom read palms and my Granny had a thing for prophecy. I was born on Halloween. I was into ghosts and all things paranormal. Still am. And so when my friend Ana opened her bridal shower gift from Christy, a deck of tarot cards, I, Gollum-like, wanted them. When Ana was mildly spooked by the cards, I offered to take them home for safekeeping. Ring-like, they stayed with me.

Hundreds of readings later that tarot deck is now soft and worn. It represents many things to me. It has meant money. I used to pick up gigs in L.A., reading fortunes at parties. It has meant special treatment. I would sometimes hide in the break room at work, reading the manager’s fortunes instead of doing my job. It has meant tedium. If you are at a party and you’re reading tarot, you can sit there until the cows come home.

But more than anything else, those cards represent an instant connection to people, often strangers. Your psychiatrist, doctor, or accountant may hear about your troubles, health, or finances, but your tarot reader hears all three. The cards are a vehicle of knowing, offering an unbettered short cut to intimacy. You would think that I learn a lot about people, reading their cards, but I do not. I do not remember 99% of readings. Even those I do remember are fairly meaningless to me. It’s the person on other side of the table who finds it memorable. That said, I have learned a lot about people reading their cards. I have learned most people have a deeply held desire to be known, and that most people feel unknown. And so when they pick their cards, and I tell them the unique story their cards write, they feel I know them. And in a way, I do. I have a long held disdain for the sentiment that we should celebrate diversity. It is our commonalities that bring us together, they are the ties that bind, not our differences. Heartache is heartache is heartache, regardless of cause or color.

I have had many incarnations as a fortune teller. Including one in which I dressed up like a gypsy complete with Cher wig, blue eye shadow, dangling coin belt and wench bustier with peasant blouse. It was even hotter than you’re imagining. I did this two times, for our equestrian center’s Halloween party. What better way to spend your birthday than hanging out in a horse stall reading tarot in the freezing cold for hours on end, after having spent the previous 12 hours scrubbing said stalls until they were clean enough for surgery? There is no better way, my friends.

And so it was during the second such Halloween party, in my third hour of tarot reading, that my most memorable reading occurred. A girl came in, a member of the kitchen staff. She was young, blonde, pretty. Nervous. Her accent was deep South Carolina Blue Ridge. She was the sort of person who trusts. I could tell she was scared of the tarot cards, and I assured her no black magic was involved. I told her my theory, that tarot offered an interesting way of meditating on a problem. A card may spark you to look at an old situation in a new way.

She then selected her fifteen cards.

Whenever a reading is not just bad, but painfully, horribly bad, the kind of bad that is unsalvageable, I find myself going, “ha ha! Yeah… you know this is just a stupid parlor trick, right?” before launching into the reading. In this girl’s case, the cards screamed: YOU ARE IN A BAD RELATIONSHIP WITH A BAD MAN AND HE WILL RUIN YOUR LIFE. 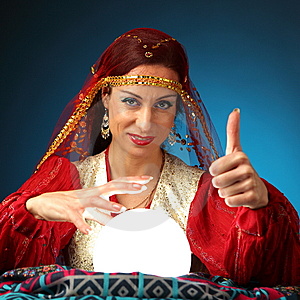 Yes, creating traumatic memories gets a thumbs up, gypsy lady.

But she looks so young, surely this is some newly acquired boyfriend. No, she tells me she just got engaged. She’s about to move out of state with him. “Ha ha!” says I, “you know this is just a stupid parlor trick, right?”

For the rest of the night, as we all cleaned up after the party, I kept finding her off in a corner, despondent. “Ha ha!” I said repeatedly, “stupid parlor trick! Stupid parlor trick! It means nothing!” She looked unconvinced, but two weeks later she left South Carolina for parts unknown. Time went on and I left that job, staying in touch with some who still worked there. More than a year later I was speaking to one of the gals who worked in the kitchen. She asked me if I remembered the young girl. It took a few promptings, but I did. “She called to see if she could have her job back,” the woman told me, adding the girl had choked up several times during the conversation. Her husband had turned out to be a very bad man who tried to ruin her life. Apparently, the first thing the girl said was, “that gypsy woman was right!”

And so this girl will be a believer. She will forever associate the tarot with a marriage gone horribly wrong. And I shall live on in infamy in that poor woman’s memory as the gypsy woman who was right. Awesome.