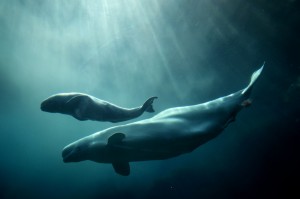 Last night I dreamt I was at a house party.

It was late in the evening. The house was up on a hill, a rolling sort of hill, with big sky, not a lot of trees. The house was single story, sort of a mix of 60’s ranch and contemporary. One corner was nothing but glass. Most of the people at the party were older. It was a quiet conversation kind of party, but I did have some friends there.

I found a courtyard garden that I loved. It had Japanese maples and a lot of lanterns. It was a small space with one large tree in the center. It was dark up on that hill, we were far from civilization, but the party had so many lanterns that the fire glow kept you from being able to see the stars.

Leaving my friends behind, I left the garden, made my way through the house, and out to the blackness of the driveway beyond. The entire time I was at this place I knew I was in a different land, but I didn’t really know what that meant until I looked up into the vast darkness – and I saw whales. In this other land there was a level of atmosphere so thick it could support life, and up in the atmosphere there were dozens of whales. As my eyes adjusted, I saw there were also translucent jellyfish, the size of buses, drifting across the cosmos, the way that jellyfish do. It was magnificent. The miracle of creation. I went back to the party and called the others to come to the driveway with me, and we just stood there for awhile, watching the sky whales and the jellyfish swimming through the atmosphere.

One thought on “Sky Whales”