The seventh grade was a good year for me. Or so I thought. It had a notorious reputation, as you left the safe haven of the elementary and entered the dangerous world of lockers and sevy hating eighth graders. As I received my yearbook my feeling was I had escaped the curse of the seventh grade. I was heading into summer with friends and a staff of teachers who liked me. This assessment was not correct.

Mrs. Ladwig, my math teacher, wrote the following in my yearbook:

Carrie – Should I write what is true or should I make you feel good? No, really, you are more capable but you are very charming. Remember, mediocrity is for gas station attendants. See you next year, E. Ladwig

Somehow, the “you are very charming” part doesn’t feel like an actual compliment in this context, but maybe that’s just me. Mrs. Polley wrote this:

Carrie – Have a good summer + do the best you can do next year…for a change! Mrs. P.

In my defense, I have no memory of slacking off in that class. There was very little in the way of opportunity for class clownery or the various other forms of performance art I favored. It was first period and I do remember being sleepy a lot. Mr. Johnson, known universally as KJ, wrote this:

Now, I do fondly remember an occasion wherein KJ began bragging about cheating on his taxes. As soon as he lit into this lecture I raised my hand high and kept it there while he boasted about how smart he was and how dumb the IRS was. Finally, annoyed, he called on me. “Do you have something to add to the conversation, Carrie?” I responded simply: “My dad is a special agent with the IRS.” Which was true, btw. Somedays, grrr, indeed, KJ. Somedays, grrr, indeed. 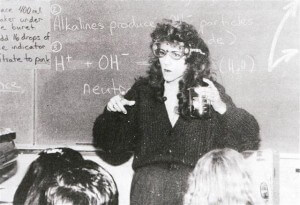 After this, I got wise and stopped asking teachers to sign my annual. With one exception. Caroline Giles had been my science teacher. I knew at the time it was a special learning experience. What I didn’t know was that it would never be surpassed. Mrs. Giles was a profoundly gifted teacher and when we ate up the curriculum she kept going. At no point in my science education did I come to a class that was anything more than a review of what Mrs. Giles had taught us–in the 7th grade. One day she came to class dressed as Mrs. Mitochondria. She also appreciated performance art. Under Mrs. Giles tutelage we instituted a recycling program at our school, despite the school’s odd reluctance. We formed a Science Club and went to elementary schools and performed experiments (more performance art!). We memorized the Periodic Table of Elements. I named a stuffed dog I got for my birthday Dmitri Mendeleev. To this day I remember, “Na, I don’t want any salt,” and “A! U! You took my gold!” We had a stupid little phrase for every element. And they worked. (Obviously.) Mrs. Giles gave me my favorite assignment of all time. We were to create a fictional animal that made evolutionary sense. My creation was an amalgmation of hippo and whale characteristics that lived in the Amazon 30,000 years ago. Hippo-shaped, it had the whale-like trait of sifting out smaller animals through its peculiar jaws and eating them en masse. Years later, I was gratified by the discovery that hippos and whales are in fact close cousins . Mrs. Giles and I were way ahead of them.

Mrs. Giles did not stay long at Cascade Junior High. Only one year. She went back to where she came from – teaching teachers as a college professor. Although she was very professional about it, I could tell she was ostracized by the rest of the staff. They didn’t like her recycling campaign, they didn’t like her Mrs. Mitochondria costume, or the fact our classroom was always so loud. She had to start keeping the door shut. I knew she was glad to leave when she did. This is what she wrote in my yearbook:

Carrie – You’re a great thinker and you have fabulous ideas! I’ll really miss you, but if you become a teacher I might see you again. Mrs. Giles

A simple message, but one that meant a lot.