For most everyone, St. Patrick’s Day means wearing green and pinching those that don’t, it might mean corned beef and cabbage or perhaps green beer. And while St. Patrick’s Day means all of that to me and more, it is also the day I pause to remember Charron’s Shamrock, also known as Rocky, the greatest 14.2 hand Arab Quarter Horse cross that ever lived.

I’ve written about Rocky before, but in deference to my sister, Rocky’s human partner for 20 plus years, I have written about him from a neutral perspective. I’d like to put down some personal recollections of the horse with a million nicknames, including, but not limited to: Roo, Rooster, Roo-ger, Charron of Shamrock, and Rock ‘n’ Roll. 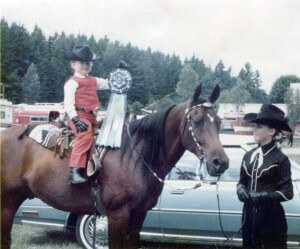 The God given giant blue ribbon.

When I was three years old, I began competing with Rocky in lead line. Lead line is an event where someone leads the horse on the ground while a child rides the horse at a walk. They are judged on their equitation. Equitation meaning, how pretty you look in the saddle. I was a fierce competitor. Heels down, eyes up, elbows in, my little heart dreaming of nothing but blue ribbons. I felt Rocky was the prettiest horse in the ring, giving me a leg up on the other children, who, likely as not, didn’t realize that lead line was a matter of life and death. It was upon Rocky’s back that I made my first deal with God. I had noticed in the show office a giant blue ribbon, a blue ribbon almost as big as me. I had my suspicion that this ribbon was intended for the lead line class. As we awaited the judge’s decision the ribbons were brought out, and lo! There it was! “Dear God,” I prayed, “if you give me that giant blue ribbon I will never ask for anything ever again.” And then the angels sang! The blue ribbon was mine! Rocky and I had scored the victory! It would not be our last.

Rocky was a phenomenally intelligent horse. Sometimes, on the way home from school, I’d cut through the horse pasture. On one occasion I paused to tie my shoe, my belongings piled around me. Rocky sneaked up and grabbed a construction paper art project I had rolled up like a newspaper. He went galloping away, the paper in his mouth, his tail flagged up over his back, tossing his head left and right, each time catching my eye to taunt me, “I have your art project! I have your art project!” On a later date he recreated this episode, this time snagging my lunchbox. I, of course, found his antics delightful. Even when he bucked me off – and let me tell you, if I fell off Rocky once, I fell off Rocky 100 times – it was funny. Despite the fact he had a special knack for making my face slam into his neck as I bounced my way towards the ground, invariably causing a bloody nose. Somehow, with Rocky, this was just entertaining.

Once I reached the 3rd grade I started showing Rocky in the regular classes. The day of my first show dawned and I was petrified. Ms. Thomas, my teacher, showed up to root me on. I entered my first walk, trot, and canter class and spent the entire time talking to Rocky at mile a minute. So many horses would have taken advantage of a small, freaked-out-of-their-gourd human on their back, but Rocky did the exact opposite. He took care of me every step of the way, and I won a sixth place ribbon. (I didn’t deserve it – the judge was giving Rocky a merit badge with that one.) Once I exited the arena Ms. Thomas came up to me, her face perplexed. “You know,” she said, “I’d thought to myself, here’s the one place Carrie can’t talk. But you never stopped.” I shrugged. It’s not like I didn’t have someone to talk to out there. I had Rocky.

That year at the King County Fair the monsoons came. Again, Rocky took care of me. In bareback equitation I almost fell off in the pouring rain. But this was no novelty – the entire class was coming apart at the seams. I looked to the stands and my sister and mom were waving me on. “Keep going! The judge didn’t see you!” they yelled. The best that could be said of that year was I survived, thanks entirely to Rocky. The next time the Fair came around it was a different story. Rocky and I were now a well-oiled machine. Nothing made me happy but championship ribbons. Not even Reserve Champion would suffice. Rocky had spoiled me.

In the sixth grade I got my own horse, a chestnut Quarter Horse. Charron’s Shamrock he was not, and the well of gaudy ribbons I had come to take for granted ran dry. I still competed Rocky occasionally, and together we won a bronze medal. It was something I had worked towards for ages, and it was a joyous occasion. It was the last thing Rocky and I won together.

While still in his prime, Rocky was aging and he had been shown a lot over the course of his life. Being a horse who knew his own mind, he decided he was done. His show career was over. It took us a little longer than Rocky to realize it, however. I took Rocky into a huntseat class and as soon as they asked for a trot Rocky bolted, bucking and rearing up a storm. He was letting me know where he stood, and while I respected that, I also couldn’t help but laugh hysterically. As I went flying past on my bronc I saw so many concerned faces. I wanted to announce, “So terribly sorry! Just having a bit of a tiff, here! We’ll be through in a minute!” But all I could do was hang on and laugh. We finally came to a stop in the center of the arena. The judge came running up, thinking I was crying. I got off Rocky and gave him a pat on the neck. It was our last class together. Somehow, it was perfectly apt. 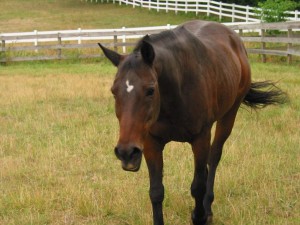 Rocky, during his retirement years in South Carolina.

Not long after that Rocky moved to Georgia with my sister. Then came back to Seattle. Then he went back, this time to South Carolina. I was living in L.A. and didn’t get to see Rocky much, but I reveled in each visit. He survived bladder stone surgery and subsequent sepsis, founder, and the onset of Cushings Disease. He was an old horse now, but still himself, still glorious.

It was Christmas time when Rocky reached the end stage of life. We tried to put Rocky down before Christmas. I remember driving up to the barn with my sister and feeling such a raw sense of horror and panic. I think I kept it well covered – I needed to be strong for my sister. I had lost pets before. But Rocky was more than that, Rocky was an institution. I was greatly relieved when they decided to put off euthanasia. He had seemed so vibrantly alive, even the vet couldn’t handle the idea of him dying on that day.

During this time Rocky was struggling with his feet and it was important they be kept picked out. We all took shifts with Rocky to tend to his needs. One cold, December night I went out to the barn. I asked Rocky for his hoof – the easy one first – and he gave it to me. And then I asked for his other front. It required Rocky to shift his weight on to his painful left front. He couldn’t do it. He couldn’t give me his hoof. I just stood there petting him, telling him it was okay, he didn’t have to do anything at this point. After a few minutes of petting, Rocky walked over to his stall wall, leaned his left shoulder against it, and lifted his right front hoof.

The next time the vet came out there was no raw horror and panic, just the knowledge that it was time.

Over my life I have known some great horses. But above them all rises a little bay Arab cross gelding by the name of Charron’s Shamrock, who came into the world on St. Patrick’s Day.

10 thoughts on “In Honor of the Shamrock”