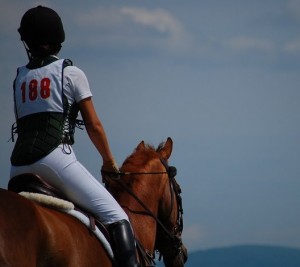 My niece, Courtney, on Robin Hood.

This last weekend was my niece Courtney’s 18th birthday, as well as her last event on the Irish Sporthorse gelding, Robin Hood. And so it was that I traveled north, to a state I’ve never been to, Virginia. Prior to setting off, I told my mom I was sure our hotel would be nice. She asked why I was so sure, and I said, “It’s in Virginia.” And verily has it been so in my imagination, that Virginia was a land of beauty, wealth and resources. I wasn’t wrong. As far as I could tell, Virginia was prettier, nicer, and altogether more perfect than the Carolinas. That said, I’ve always believed that imperfections are where one finds the most compelling sorts of beauty. This is why I love South Carolina. (How about that complisult, South Carolina? South Carolina does not deign to reply.)

Upon arrival at the Virginia Horse Park, we found my niece at the Bent Tree barn. A lot of showgrounds have chintzy, impermanent stabling. Because we were in Virginia, the barn was gorgeous, bright and airy, with its own indoor schooling ring (!!!).

Now, my sister Becky had told me that Hillary Irwin and her mother Carrie Cotter Irwin would be there. To refresh y’all’s memory – Carrie’s parents own my beloved Toby’s Corner, the chestnut piece of awesome that won the Wood Memorial, vanquishing Uncle Mo. Hillary Irwin is a top eventer who owned the original Toby, a pony who had the corner stall. Becky said she’d introduce me to Carrie, and I was all twitterpated. For me, meeting the Cotters is akin to, say, meeting Rihanna, or Kristen Stewart, or Fill-in-the-blank-celebrity-of-your-choice.

So imagine my surprise when upon meeting Carrie I discovered she was sitting with her father, Mr. Julian Cotter, owner and breeder of Toby’s Corner. Did I have a complete and total fan girl freak out? Yes, yes I did, and I’m not ashamed to admit it. I believe there might have been some ranting. “I was never afraid of Uncle Mo!” There was some gushing. “You’ve bred TWO Wood Memorial winners!” There was probably some blathering. Luckily, I don’t remember the details of that.

Best of all, Mr. Cotter was even cooler than I expected him to be. He was very classy, and didn’t say anything untoward, but he definitely had some great lines, too. For example: “At the Wood Memorial, they’d declared it Uncle Mo Day. When we walked in, they tried to give us an Uncle Mo bracelet. We politely declined.”

He also proudly declared, “When I looked at Toby’s Corner, I said, ‘This is going to be the one.'” At which point his daughter said, “You’ve been saying that for forty years.” Mr. Cotter replied, “And I’ve been right twice!”

As you all can imagine, I was in horse girl nerd heaven. 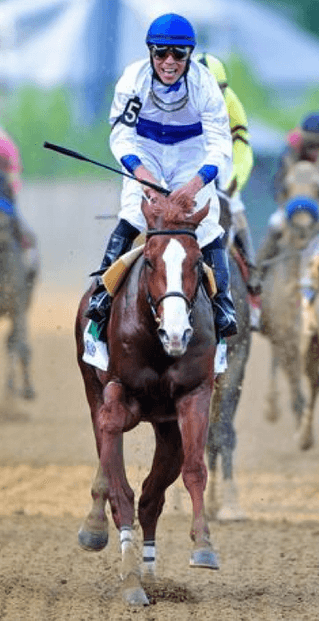 The classy speed, Shackleford. Look how happy Jesus Castanon is.

Mr. Cotter also said he’s been traveling to Saratoga religiously for years. Now that Toby’s on the mend, and according to trainer Graham Motion, pointed toward the Travers Stakes, one can only imagine how much a Travers win would mean to the Cotter family. If Toby were to win the Travers, you can rest assured I’d once again scare my cats with my over-the-top celebration.

On a somewhat related note – my mom and I have been attending horse events for years. We are small, small fry in the big world of equestrian sport, and we’re pretty used to being treated like the very, very small fry that we are. (One notable exception – Bobby Costello. He’s always nice. And funny.) In any case, on the second day of the show, my mom and I found ourselves sitting at a picnic bench, waiting for results. (We would eventually find out that Courtney finished 7th out of a big and competitive field.) As we sat there, sipping our coffee, a nice looking horse and rider came our way, obviously exiting a cross country go. “Good morning!” said the rider. My mom and I looked at each other, wondering if we were the ones being addressed. And then I realized it was Hillary Irwin. “Hello!” we called back. After she passed by, my mom said, “Holy cats. A friendly top class rider? Who’da thunk it?” Soon enough, Hillary passed us again, headed back to cross country, now on a grey. “Good luck!” I said, and she said, “Thanks!”

Now, this probably seems like a paltry small deal, and maybe it is. But both my mom and I found it a remarkable one. Perhaps a sad reflection on a lot of top riders, but it’s also just the truth. And it’s one more reason why I’d be so thrilled with any future success Toby’s Corner might have – his people are good people, and that’s all too rare in this day and age.

Finally – the Preakness. Unfortunately, there’s not a lot to say. “Beware the classy speed!” I said several times during the post parade, while referring to Shackleford, not Flashpoint. The classy speed is always dangerous, and Shackleford is classy speed. But he wants no part of a mile and a half. The day after the race, Carrie Cotter Irwin asked if I thought they’d send Shackleford to the Belmont. “No way!” I said. “They’d be crazy to think he’d get the distance!” Well, as of now, they’re sending him. And I officially think they’re crazy. He’s a good horse. Why burn him up going that far around Big Sandy? (Big Sandy being the nickname of the track at Belmont. It is a mile and a half, one trip around, and the footing is sandy, and therefore tiring.)

I do think Animal Kingdom would relish the added ground. If he’d had a few more yards in the Preakness he would have overtaken Shackleford and won. I hope they send him, but I can see where Graham Motion might want to save him for the second half of the season.

For myself, with no Triple Crown on the line, my focus shifts to the year end Eclipse Awards. Who’ll win top 3 year old colt? Toby’s still in it, and my money’s with him, wherever he goes.

One thought on “Preakness Recap, or, The Story of How Carrie Met Mr. Cotter”